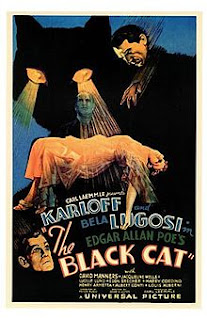 For a horror film that actually shows very little, The Black Cat (1934) manages to suggest a great deal, and the result is a story that works on the imagination long after the brief picture has ended. Director Edgar G. Ulmer crams this small, dark package with surreal images and grotesque crimes only hinted at and glimpsed in snatches, which makes them all the more disturbing to the astute viewer. Like most films "suggested" by Edgar Allan Poe's short stories, The Black Cat has little to do with the original text, but it spins a narrative gruesome enough to fascinate classic horror fans, and the performances of Boris Karloff and Bela Lugosi help to make the movie an enduring cult favorite among Universal horror's devotees.

Lugosi plays Dr. Vitus Werdegast, who meets a young American couple on an ill-fate rail journey through Hungary. Newlyweds Peter and Joan Alison (David Manners and Julie Bishop, credited as Jacqueline Wells) find their new companion strange, but their misgivings only grow when a bus accident forces them to join Werdegast as the house guests of Hjalmar Poelzig (Boris Karloff). Werdegast and Poelzig have a history that makes them bitter enemies; their conflict rapidly becomes deadly, with the honeymooners caught in the middle of their bizarre struggle over the mysterious fates of Werdegast's wife and daughter.

The Black Cat marks the first screen pairing of Karloff and Lugosi, who would go on to make eight films together in all. Both were top horror stars already, and Universal clearly realized that putting them together would double the picture's appeal. Their roles offer them a little deviation from the parts that they had most recently played, but each is still very much in the vein of his overall screen persona. Karloff, talkative, urbane, and utterly perverse, is the ultimate villain of the piece, but Lugosi's doctor is sinister and vengeful enough that Peter and Joan are right to shy away from him, even if he hopes to save them from Poelzig's satanic schemes. Evenly matched, neither can conquer the other without sacrificing himself; the inevitable finale of rampant destruction is a scene Poe himself might well have approved, with undertones of "The Fall of the House of Usher" in the explosive collapse of Poelzig's modernist temple of death. Knowledge of the ending in no way spoils the picture, for doom has been written on these characters' brows from the moment they first appeared, and our only uncertainty is whether the Alisons will make it out to tell their tale of bloodcurdling revenge.

Coming at the very end of the Pre-Code period, The Black Cat gets away with material that would never have gotten into theaters a year or two later, and it still contains enough shock value to get the attention of a jaded modern viewer. Poelzig is a sadist, a murderer, and the leader of a satanic cult; he embalms the corpses of his dead wives and keeps them on display in glass cases hidden beneath his cosmopolitan home. The women are suspended in midair, a grisly collection of blonde butterflies in white gowns. Poelzig has also committed a strange form of incest by first marrying Werdegast's wife and then marrying his daughter (Lucille Lund). Murders and violent deaths abound, but we also see Poelzig plot to sacrifice Joan on his satanic altar, and the climax reveals more horrors that we're glad we never witness in too much detail. Beneath these terrors lies the grim history of Hungary itself; Poelzig's house is built on the site of a bloody massacre from World War I, and Werdegast blames his nemesis for the deaths of thousands as well as his own family's destruction. Viewers in 1934, especially in Europe, would have remembered that conflict better than we do today, but its violence echoes through the eerie menace of the picture. Ulmer and Lugosi had both been born in Austria-Hungary, which collapsed when the war ended in 1918, so it's not surprising that the tragic back story of the picture depends so heavily on the atrocities of that conflict.

Most horror fans will recognize David Manners from his roles in other Universal horror films, including Dracula (1931) and The Mummy (1932). For more of Karloff and Lugosi together, see The Raven (1935), Son of Frankenstein (1939), and The Body Snatcher (1945). Jacqueline Wells started appearing as Julie Bishop in the 1940s and went on to star in Northern Pursuit (1943), Westward the Women (1951), and a number of other films, mostly Westerns and war dramas. Edgar G. Ulmer is best remembered today for The Black Cat and the 1945 noir favorite, Detour, but he also made The Strange Woman (1946) and The Man from Planet X (1951).

Posted by Jennifer Garlen at 4:01 PM