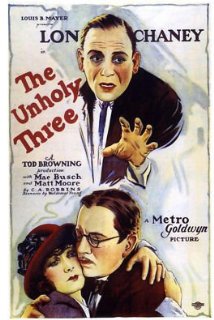 The Unholy Three (1925) takes director Tod Browning and star Lon Chaney out of the horror genre, but this silent crime drama is still weird enough to satisfy fans of their other films. Many of Browning's favorite motifs are on display, including his obsession with carnival sideshow types, and Chaney, so often deformed to play strange characters, this time adopts the guise of a little old lady with stooped shoulders and a sweet, grandmotherly face. Mae Busch, Harry Earles, and a young Victor McLaglen add to the film's appeal with their performances, with Earles in particular getting the opportunity to prove that his small stature was not the only thing he had to bring to his roles.

Chaney plays sideshow ventriloquist Echo, who hatches a bizarre scheme to commit robberies by posing as the elderly female owner of a bird store. He recruits fellow performers Hercules (Victor McLaglen) and Tweedledee (Harry Earles) as his accomplices, and he also brings along his pick-pocket sweetheart, Rosie (Mae Busch). Echo's plans go awry when Hercules and Tweedledee commit a Christmas Eve robbery without him, and Rosie turns out to be in love with the innocent man they intend to frame for the crime.

Chaney's character resembles many of his other roles in that Echo is not an entirely bad man, but one capable of great good or great evil as a result of his ambitious, jealous nature. Echo loves Rosie more than he is able to express to her; he doesn't even realize how much he cares about her until she falls for the unassuming Hector (Matt Moore). When Rosie pleads with Echo to save Hector from being executed for the trio's crimes, Echo has to choose between selfless love and his own safety. As Echo, Chaney is intense, a man taut with energy and expectation. As Mrs. O'Grady, he hides that masculine identity beneath an old woman's face and clothes, but the best scenes show Echo struggling to repress his real feelings while maintaining his feminine disguise. The ridiculous nature of Echo's impersonation grabs our attention in several scenes, but Browning and Chaney frequently remind us that this is no mere frolic, and the consequences of the trio's robberies are deadly.

Of the supporting players, Victor McLaglen and Matt Moore have the least to do, although seeing McLaglen's impressive physique is quite a thrill. Moore’s milquetoast Hector is the weakest part of the film, even more so than the chimpanzee standing in for a ferocious gorilla. He’s so dull that it’s hard to understand what Rosie sees in him, although Mae Busch gives a very good performance as the bad girl slowly succumbing to her better nature. Harry Earles steals his scenes repeatedly as Tweedledee, who spends much of his time pretending to be a toddler but really has the most violent, selfish nature of the lot. When we first meet him, he kicks a child in the face and then tries to get into a brawl; later he watches the other characters with sharp, calculating eyes, always waiting for an opportunity to get the upper hand. The role provides a fascinating contrast with Earles’ best known part, that of the innocent Hans in Browning’s horror masterpiece, Freaks (1932).

Lon Chaney and Harry Earles reprised their roles for a sound version of The Unholy Three in 1930, with Jack Conway as the director. Tod Browning is best remembered today for Dracula (1931), but his other films with Chaney include The Unknown (1927), West of Zanzibar (1928), and Where East is East (1929). See more of Mae Busch in Foolish Wives (1922), Souls for Sale (1923), and Sons of the Desert (1933). Victor McLaglen won an Oscar for Best Actor for The Informer (1935); a favorite of director John Ford, he makes memorable appearances in Wee Willie Winkie (1937), She Wore a Yellow Ribbon (1949), and The Quiet Man (1952). Browning liked the drag aspect of The Unholy Three enough to revisit it with The Devil-Doll (1936), in which Lionel Barrymore tackles the role of the counterfeit granny.
Posted by Jennifer Garlen at 3:00 PM