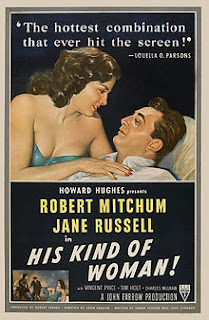 His Kind of Woman (1951) combines film noir and cock-eyed comedy in the performances of two great stars, Robert Mitchum and Vincent Price. Mitchum handles the grimmer business, facing off against Raymond Burr and a gang of nasty lackeys, while Price hams it up gloriously as an actor who yearns to play the hero in real life. John Farrow directs the whole with a skillful hand, weaving together the lighter and darker elements to create a thoroughly entertaining film that also highlights the charms of Jane Russell as the love interest of both leading men.

Mitchum heads up the cast as Dan Milner, a gambler whose run of bad luck pushes him to accept a mysterious but lucrative job in Mexico. Installed in a posh resort and awaiting further orders, Milner tries to figure out who hired him and why, but the more he learns the less he likes it. Meanwhile, Milner strikes up a romance with Lenore Brent (Jane Russell) in spite of her relationship with Hollywood star Mark Cardigan (Vincent Price).

The picture begins as straightforward noir and slowly evolves into something else. Very early on we see Milner get worked over for a bet he didn't make, and we hear that bad things have been happening to him a lot lately. Soon he's told that "maybe this part of the country isn't lucky for you anymore." Milner is no dummy; he realizes that his acceptance of the Mexican job has been orchestrated by some unknown party that probably doesn't have his welfare in mind, but he knows a fix when he's in one. He bides his time for an opportunity to fight back, which gives him plenty of leisure to pursue Lenore, even though she isn't what she seems. All of this is strictly noir material, and when Raymond Burr's vicious Nick Ferraro shows up things get really ugly. Around the midway point, however, Price's bombastic, good-natured character starts to undermine our fatalistic view of the action with his hilarious antics. Whether he's clapping at his own picture, spouting Shakespeare, or firing shots at Milner's enemies, Cardigan is always a hoot, and Price steals every scene where he turns up. Mitchum makes the movie cool, but Price makes it fun, and His Kind of Woman thus occupies a space all its own in the classic noir canon.

The film's other performances also contribute to its overall appeal, with Russell in fine form, especially during her musical numbers. She holds the screen against both of her male costars and moves easily between the picture's moods. Jim Backus provides comedy with a hint of menace as a scheming resort guest with his eye on a pretty newlywed, and Tim Holt is solid as a federal agent who tries to get Milner to help the law nab Ferraro. Charles McGraw is thoroughly unpleasant as Thompson, whose job is to keep Milner in line until his boss arrives, but Raymond Burr really takes the prize for worst bad guy as the brutal and possibly insane Ferraro. Deported from the United States but determined to get back to his underworld business, Ferraro plans to replace Milner by having plastic surgery to look like him. He doesn't take it well when Milner wants out of the arrangement. "I hate welchers, Milner," he growls, just before he knees Milner in the groin and then has him lashed with a belt. Later he threatens Milner with a Nazi drug that will destroy his mind and slowly kill him. It's no wonder that Milner objects to handing over his identity.