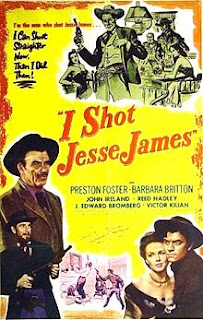 I Shot Jesse James (1949) marked the directorial debut of Samuel Fuller, who would go on to make the noir classic, Pickup on South Street (1953), as well as films like Shock Corridor (1963) and The Naked Kiss (1964). Like his later pictures, this semi-biographical account of Robert Ford rejects easy moral distinctions; its protagonist is no hero, but a man motivated to murder his friend in pursuit of his own personal happiness. Fuller's screenplay takes liberties with the history of the James Gang and the man who eventually caught up with Bob Ford, but it makes for a gripping narrative that demonstrates Fuller's talent even at the beginning of his career. A taut performance from John Ireland as the lead character helps to pull us into Bob Ford's flawed logic even as we recoil from his brutal, selfish nature.

Ireland plays Ford at the critical juncture of his life as an outlaw, when he hopes to marry longtime sweetheart, Cynthy (Barbara Britton), but finds himself trapped by his association with the notorious Jesse James (Reed Hadley). When the authorities offer amnesty to anyone who brings James in dead or alive, Bob sees his chance and shoots his unsuspecting friend in the back. His actions make him a pariah with the public and a target for aspiring gunmen, but they also make Cynthy rethink her feelings for him. Soon she attracts the romantic interest of Kelley (Preston Foster), a decent but unsuccessful prospector, and Bob's jealousy becomes violent.

The film promotes the popular view of James as a pretty good guy in spite of his criminal career, especially in the way it depicts him at home, where he lives under the pseudonym of Mr. Howard. Jesse is loyal and generous to his friends, including Bob and his brother, Charles (Tommy Noonan), although their prolonged stay in the James home irritates Jesse's wife, Zee (Barbara Woodell). Jesse's treatment of Bob makes the younger man's betrayal all the more inexcusable, and Fuller never lets us believe that Bob is really motivated by love because he clearly doesn't understand what it is. Bob sees Cynthy as a reward he can win through underhanded actions, but the murder makes her love for him turn to fear and disgust. She's too afraid of him to tell him that she doesn't want to marry him anymore, and Bob is too dumb to figure it out for himself.

John Ireland's portrayal of Ford casts him as a small-time thug, a jealous lover, and a total failure as a human being. Ireland looks very much at home in the Western genre, where he spent much of his career, and he evokes the brutish quality of his character with his dark features and tight-lipped mouth. His Ford always looks ready to punch somebody in the face, even in his love scenes with Cynthy, who is right to be afraid of him. Even worse, Bob offers to recreate the killing on the stage as a way to make cash, although opening night finds him unable to face the prospect, with a stony-faced crowd silently watching him sweat. Some stories tell of good men gone wrong, and some of bad men who become good, but Bob Ford is a stinker through and through, a treacherous snake who uses love as an excuse to commit an unforgivable act. It takes Bob a long time to figure out why that might have been the wrong thing to do, and by then it's too late, with his friend in the grave and his hopes for the future in ruins.

Samuel Fuller's next picture was also a Western, The Baron of Arizona (1950), with Vincent Price as an amoral but more lovable schemer. John Ireland earned an Oscar nomination for Best Supporting Actor for All the King's Men (1949), but you'll also find him in Raw Deal (1948), The Return of Jesse James (1950), and Gunfight at the O.K. Corral (1957). For more films about the James Gang, try Jesse James (1939) and The Return of Frank James (1940), both of which feature John Carradine in the Bob Ford role. In 2007, Hollywood revisited the story with The Assassination of Jesse James by the Coward Robert Ford, with Brad Pitt as Jesse and Casey Affleck as Ford.
Posted by Jennifer Garlen at 7:54 PM