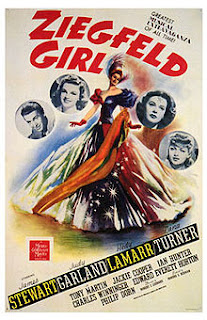 Ziegfeld Girl (1941) provides a different perspective on the Ziegfeld Follies from Best Picture Winner The Great Ziegfeld (1936); it focuses on a trio of chorines rather than the showman himself, who never actually appears in the picture. Judy Garland, Lana Turner, and Hedy Lamarr star as three young women whose Broadway experiences lead to different fates, and each shines in her respective role. Direction from Robert Z. Leonard heightens the drama and romance, and Jimmy Stewart gives a memorable performance as Turner's unhappy beau. Like other films about the Follies, Ziegfeld Girl includes lavish recreations of the original stage spectacles, with Busby Berkeley directing the show-stopping musical numbers.

Judy Garland plays Vaudeville baby Susan, who has the talent to become a star and the unflagging support of her performer father (Charles Winninger). Lana Turner is Sheila, an elevator girl picked out for the chorus by Ziegfeld himself, much to the dismay of her boyfriend, Gil (Jimmy Stewart). Hedy Lamarr plays Sandra, the wife of a gifted but unsuccessful violinist (Philip Dorn); she takes the chorus job for the income but wounds her husband's pride in the process, which strains their marriage to the breaking point. Each of the three women finds moments of happiness and heartbreak, but only one is destined for tragedy.

The three leading ladies are markedly different from one another, just like their characters, but each adds to the movie's overall appeal in her own unique way. Garland's Susan, fresh faced and girlish, is the innocent kid; she just wants to put on a good show and make it in the business. In spite of her unconventional upbringing on the Vaudeville stage, she's so unspoiled that her idea of romance is a root beer at the soda fountain. She's very similar to the teen characters Garland plays in her pictures with Mickey Rooney, including the Betsy Booth role in the Andy Hardy series. Lana Turner is a little more mature as Sheila, who is old enough to marry Gil but quickly gets distracted by money, male attention, and booze. Her downward spiral into alcoholic self-destruction takes Gil along with her until he ends up working for a gangster and going to jail. Both Turner and Stewart get plenty of dark moments that convey the bitter heartache their characters endure over the course of the film. Lamarr's Sandra is the oldest of the three women, and her story starts at a low point, when she and her husband, Franz, have had to pawn his violin to buy food. Sandra, so striking that even the chorus girls nickname her "Beautiful," has no desire for fame or attention, but she takes the job to help Franz even though it drives him away. Lamarr's breathtaking beauty is displayed most effectively in the stage production numbers, but she also brings an air of Continental experience to her character, who already knows more than the others about life, loss, and love.

The supporting cast is stocked with familiar faces. Charles Winninger does especially well as Susan's Pop, who has to face his own rejection by the Follies when Susan gets her big break. His character represents the the Vaudeville roots of the Broadway shows and a way of life that was fast disappearing as the twentieth century gathered steam. Jackie Cooper connects the characters of Susan and Sheila as Sheila's younger brother, Jerry, who worries about his sister while falling for her talented friend. Tony Martin provides music and illicit romance as the show's solo singer, Frank, who woos Sandra even though they are both still married. Since Ziegfeld himself never turns up in person, Edward Everett Horton fills in as his representative, Noble Sage, who has to handle a crowd of chorus girls and keep the show going. In smaller but still memorable roles are Eve Arden, Dan Dailey, Felix Bressart, and Fay Holden, each getting at least a few good scenes and, in Arden's case especially, some excellent lines.

The Follies get a third movie treatment with Ziegfeld Follies (1945), which also features Judy Garland. Robert Z. Leonard directed The Great Ziegfeld (1936), as well, and his other films include Dancing Lady (1933), Pride and Prejudice (1940), and In the Good Old Summertime (1949). For more of the gorgeous Hedy Lamarr, see Algiers (1938), Experiment Perilous (1944), and Samson and Delilah (1949). You'll find both Lana Turner and Judy Garland in Love Finds Andy Hardy (1938), but Turner is best remembered today for her femme fatale turn in The Postman Always Rings Twice (1946). Ziegfeld Girl was the last picture Jimmy Stewart made before departing for the Army and World War II; his next movie, five years later, would be It's a Wonderful Life (1946).
Posted by Jennifer Garlen at 12:34 PM