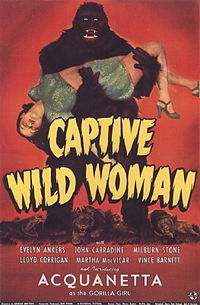 Director Edward Dmytryk's Universal horror is not without its flaws, but Captive Wild Woman (1943) transcends its low-budget tactics with quality performances and a narrative loaded with variations on the usual genre motifs. In addition to memorable horror stars like John Carradine and Evelyn Ankers, this story of a gorilla gone wrong features the inscrutable and alluring Acquanetta as a mysterious girl who literally comes between a struggling big cat tamer and his dangerous charges. Themes of female agency and desire also make Captive Wild Woman a worthwhile picture for fans of films like Dracula's Daughter (1936) and Cat People (1942), which give the ladies a chance to be the monsters for a change.

John Carradine stars as glandular specialist Dr. Sigmund Walters, who gets acquainted with the members of the Whipple Circus when he begins to treat Dorothy, an ailing performer (Martha Vickers). Not long after Walters tours the circus grounds, a newly acquired ape named Cheela goes missing, and Walters returns with Paula, a mute but attractive girl who proves to have a strange power over the circus animals. Paula becomes an assistant to cat tamer Fred Mason (Milburn Stone), whose fiancee, Beth (Evelyn Ankers), is Dorothy's older sister. None of the circus folk suspect the truth about Paula or the dangerous relationship she has to Dorothy, but Beth soon becomes convinced that something connects Paula, Dr. Walters, and the increasing illness of her sister.

Nobody is going to be fooled by the gorilla suit version of Cheela for an instant, but the transformation sequences are handled well, and patently fake gorillas are more or less standard in films of this era. The lions and tigers, however, are terrifyingly real, although recycled footage of the cage scenes makes it painfully clear that Milburn Stone never sets foot near an actual cat. The man in those shots is famed lion tamer Clyde Beatty, who appeared as himself in several films, including The Big Cage (1933), which Captive Wild Woman borrows from liberally for its big cat sequences. Fortunately, the movie has the irresistible screen presence of John Carradine to make up the weakness of Stone as a leading man. No special effects are necessary to make Carradine the epitome of the obsessed scientist who pursues his forbidden research at any cost, including the life of his nurse (Fay Helm).

As memorable as Carradine is, Captive Wild Woman is really about its women, especially Paula and Beth, who advance the plot in between Fred's bouts with the big cats. Acquanetta has the perfect look for Paula; like Kathleen Burke as the Panther Woman in Island of Lost Souls (1932), Acquanetta has a wild, exotic beauty that mingles innocence and menace. Her racial ambiguity was a key part of her Hollywood persona, although claims that she was really African-American add a troublesome subtext to her role as a half-human, half-animal being. Evelyn Ankers is the film's real protagonist; her character, Beth, struggles to protect her sister and solve the mystery of Paula's identity. Fred has his hands full at the circus, so it's up to Beth to confront Dr. Walters and save Dorothy, which Ankers' determined heroine is perfectly capable of doing. Fred, meanwhile, has to be saved on more than one occasion by Paula, although why either she or Beth like him is beyond anyone's ability to guess.

Be warned that the animal act sequences are violent, abusive, and not for the squeamish. The Big Cage was shot before the American Humane Association began monitoring productions in 1940. Captive Wild Woman did well enough to warrant a sequel, Jungle Woman (1944), which reunited Acquanetta, Ankers, and Stone for another confrontation. See more of Ankers in The Wolf Man (1941), The Ghost of Frankenstein (1942), and Son of Dracula (1943), and check out Carradine's turns as Count Dracula himself in House of Frankenstein (1944) and House of Dracula (1945). You might recognize Martha Vickers for her other role as a little sister in The Big Sleep (1946). Edward Dmytryk, though a prolific director, did not generally make horror; his best known films include Murder, My Sweet (1944), Crossfire (1947), and The Caine Mutiny (1954).
Posted by Jennifer Garlen at 2:54 PM