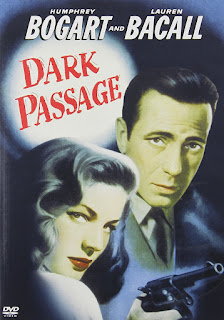 Delmer Daves' Dark Passage (1947) is the third picture to pair Humphrey Bogart and Lauren Bacall, who had become Mr. and Mrs. Bogart in 1945, after their steamy introduction to one another and the world in To Have and Have Not (1944). Dark Passage is not as celebrated as that first film or The Big Sleep (1946), but it represents another opportunity to see the couple heat up the screen with their legendary chemistry. In spite of its emphasis on the romance between its two leads, the movie takes a deeply cynical view of the justice system and provides enough murder and mystery to satisfy film noir fans.

Bogart stars as Vincent Parry, who escapes from San Quentin after being wrongly imprisoned for the murder of his wife. He gets unexpected help from Irene Jansen (Lauren Bacall), a sympathetic and very attractive young woman. Irene hides Vincent in her car and then her apartment as the cops search for him all over San Francisco. With a new face molded by an eccentric plastic surgeon (Houseley Stevenson), Vincent sets out to learn who framed him for the killing of his wife and his friend, George (Rory Mallinson), who turns up dead just after Vincent makes his escape. His efforts are complicated by Madge (Agnes Moorehead), a former acquaintance who testified against him in court, and by a cheap crook (Clifton Young) who hopes to blackmail Vincent and Irene.

The movie opens with the unusual and not entirely successful gimmick of making the camera show Vincent's perspective rather than Vincent himself, a trick also used the same year in Lady in the Lake (1947). It takes more than a third of the movie for us to get our first real glimpse of Bogart. The justification is that it takes that long for Vincent to look like Bogart, since he has to have the plastic surgery to hide his identity from the cops, but it still seems like a long time to run with this approach. It also delays the signature banter and sexual sparks that fly between Bogart and Bacall, which is why most people watch the movie in the first place. Once we finally have the leading man in the camera's view, the movie picks up, and the two stars get their much anticipated scenes together.

When Bogart and Bacall aren't busy with their romance, Dark Passage turns its attention to darker themes, namely the total absence of justice in a system that treats innocent men as killers and lets guilty people get away. The rotten characters, played with malevolent energy by Agnes Moorehead and Clifton Young, use that broken system for their own benefit, and only poetic justice ever catches up with them. Sympathetic characters immediately side with Vincent, even if they don't know anything about him. Irene knows from personal experience that the law is good at going after the wrong guy; her own father died in prison under similar circumstances, and she has followed Vincent's case from the beginning. Vincent also gets understanding assistance from a cab driver (Tom D'Andrea) who arranges the appointment with the plastic surgeon and doesn't even expect anything in return. Vincent quickly realizes that it's up to him to figure out who really murdered his wife and his friend, since the cops are only interested in catching him, but even when he gets the answer he can't fix a system that never looks beyond the easiest, most obvious suspect.