Loosely adapted from a short story by Robert Louis Stevenson, director Joseph Pevney's The Strange Door (1951) plays like a primer for one of Roger Corman's Poe pictures, and fans of those films will find much to appreciate here. Gothic elements abound, including a forbidding castle filled with instruments of torture, but the movie's chief spectacle is Charles Laughton as a deranged nobleman bent on sadistic revenge. Boris Karloff also makes a memorable appearance in a supporting role, although Laughton takes the monster's part for this twisted tale. The Strange Door is a minor entry in the horror canon, and by no means a perfect film, but it's worthwhile viewing for Laughton devotees who love his most unsavory characters. 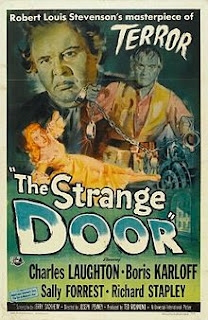 Richard Stapley plays young Denis de Beaulieu, who finds himself an unwilling house guest when Sire Alain de Maletroit (Charles Laughton) thinks he's blackguard enough to be imposed as a bridegroom on the nobleman's niece, Blanche (Sally Forrest). De Maletroit secretly keeps Blanche's father (Paul Cavanagh) locked up in his dungeon, where the prisoner is attended by his faithful servant, Voltan (Boris Karloff). The villainous lord forces Denis and Blanche to marry in the hope that they will hate each other heartily, but when they fall in love instead he resorts to extremes to exact his long-desired revenge.

Laughton revels in his role as the malevolent de Maletroit, making even the most casual lines drip with veiled cruelty. The audience knows immediately that he's a villain, but the extent of his evil is revealed more slowly, building toward his climactic attempt to murder his entire family. Laughton's fleshy, sly face is perfectly suited to this kind of deviant character; he combines the urbane menace of Vincent Price with the corpulent self-indulgence of Sydney Greenstreet. He both fascinates and repulses as we watch him torment his victims, even as he himself is egged on by his henchmen. It's true that de Maletroit's actions don't make a lot of sense, especially his scheme of marrying Blanche off by force to the first cad he can find, but Laughton makes us believe that the character is crazy enough to cook up such a cock-eyed plot. In a Pre-Code picture he might have devised a far more gruesome fate, and Price's heavies in the Corman films certainly put more thought into their nasty plans. Foolishly, De Maletroit doesn't foresee the possibility that his young people might actually start a romance and spoil his little game.

Stapley and Forrest fill their straightforward roles well enough, but the other supporting characters have more interesting parts to perform. Karloff, who had played plenty of monstrous heavies over the years, here gets a more sympathetic role in Voltan, who hopes to free his original master from the usurper's power. He's not exactly heroic, given that he hasn't managed to get poor Edmond out of the cell in twenty years, but he has a pathetic, loyal quality, something like a faithful dog, that really comes to the foreground in the final scenes. Paul Cavanagh does a lot with the minor role of Edmond, who pretends to be insane while waiting for a chance to escape his brother's clutches. His madman act is so convincing that it's a shock to see him come out of it. William Cottrell and Michael Pate play de Maletroit's lackeys with grim enthusiasm, and Alan Napier turns up for a brief but effective performance as a friend who tries help Denis escape from his wedding banquet.

For another adaptation of a Stevenson short story, try The Body Snatcher (1945), in which Karloff takes a more prominent role. Joseph Pevney also directed the Lon Chaney biopic, Man of a Thousand Faces (1957). Catch Laughton being even more horrible in Island of Lost Souls (1932), or see his kinder, gentler side with Ruggles of Red Gap (1935). Richard Stapley acted under the name Richard Wyler later in his career and starred in the TV series, Man from Interpol.

Posted by Jennifer Garlen at 3:15 PM