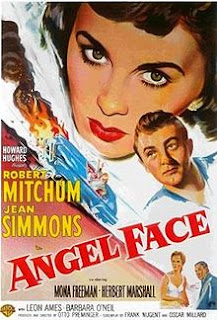 Robert Mitchum and Jean Simmons play a deadly game of dysfunctional romance in Otto Preminger's Angel Face (1952), which features a particularly tragic femme fatale caught in the undertow of her own insanity. Everyone around her is in danger of being dragged down, as well, but Mitchum's protagonist is foolhardy enough to see the danger signs and still dive in. Angel Face benefits tremendously from Preminger's direction and the performances of the two stars, but the picture ultimately belongs to Simmons, whose sweet face conceals the murderous disorder of her obsessive mind.

Mitchum stars as Frank, an ambulance driver who answers a call at the Tremayne house only to become drawn into the family's affairs by Diane (Jean Simmons), a beautiful but manipulative young woman who hates her wealthy stepmother (Barbara O'Neil) as much as she adores her novelist father (Herbert Marshall). Frank blows off his steady girl, Mary (Mona Freeman), in order to spend time with Diane, even though he realizes that he's setting himself up for trouble. When Diane is accused of murder, Frank finds his own life on the line, as well, and he's forced to stick with her in spite of his desire to break things off and go back to Mary.

Mitchum, of course, was made for film noir, but this performance sees him in a more passive role. Frank lets Diane lead him around by the nose until it's far too late to walk out, even though he eventually gets fed up enough to try. The actor has a unique ability to make us believe how a smart guy might do a series of very stupid things. "Never be the innocent bystander," Frank says, "that's the guy that always gets hurt." He doesn't take his own advice. Simmons is a marvel as the siren who lures Frank on toward disaster; she isn't intentionally bad so much as she is utterly deranged, a broken doll with a little girl's face and a jealous killer's heart. Like Ellen Berent in Leave Her to Heaven (1945) and Annie Laurie Starr in Gun Crazy (1950), Diane is capable of love, but it's a passionate, possessive storm of emotion that destroys the ones it adores. Diane loves her father, but she can't tolerate her stepmother's intrusion into their lives, and her desire to get rid of Catherine Tremayne takes her well beyond the point of no return. She loves Frank, even though she knows that he never stops thinking about returning to Mary. Eventually she realizes that there's only one way to make sure that he never walks out.

The supporting performances are all solid, with Herbert Marshall especially sympathetic and rather pitiable as the novelist whose marriage into money has ruined him for his art. We can see why Diane worships her father, but we also recognize the essential weakness of his nature. Barbara O'Neil does an excellent job with the tough role of Diane's stepmother. Diane, resentful and childish, wants to cast her as a fairy tale villain, while O'Neil shows us the extent to which Diane's vision is self-deluding. Mona Freeman has some very good scenes with Mitchum as the justly offended girlfriend, but her best moment is the luncheon confrontation with Diane, where Mary proves that she's not going to play Diane's duplicitous game. Leon Ames is polished and rather disturbing as the attorney who defends Diane, and Jim Backus turns up for a few energetic scenes on behalf of the prosecution.

Posted by Jennifer Garlen at 1:10 PM