Classic Films in Focus: THE BEAST WITH FIVE FINGERS (1946) 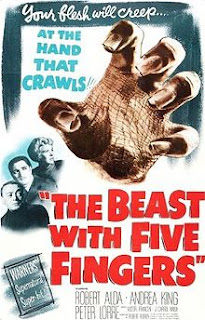 The Beast with Five Fingers (1946) is a surprisingly effective chiller from director Robert Florey and screenwriter Curt Siodmak, who also penned horror classics like The Wolf Man (1941) and I Walked with a Zombie (1943). For genre fans, the chief draw of the picture is Peter Lorre as an obsessed astrologist, but Lorre gets competition for our attention from the ambulatory human hand that gives the movie its title. Well-executed special effects, interesting characters, and a score by Max Steiner all contribute to the film's appeal, with J. Carrol Naish putting in a particularly entertaining appearance as the police commissioner in charge of unraveling the mystery of the murderous hand.

Lorre plays Hilary Cummins, the secretary to Francis Ingram (Victor Francen), a crippled pianist living in a lavish Italian villa. Ingram's obsessive attachment to his attractive nurse, Julie (Andrea King), makes her decide to leave, but before she can depart Ingram dies under somewhat suspicious circumstances. Strange events then begin to occur, and it appears that the dead man's hand may be on the loose. Julie and her friend, Bruce Conrad (Robert Alda), become pariahs to the locals because of the bad luck of the house, while Hilary claims to have seen the killer hand in action. Meanwhile, Ingram's greedy relatives try to undermine the validity of a will that leaves the entire estate to Julie, including the books vital to Hilary's astrological research.

While the cast is solid across the board, Lorre stands out for his portrayal of the decidedly weird astrologist, who lurks around the corners of the villa's many rooms and rapidly comes unglued once the hand starts wreaking havoc. It's never hard to believe in Lorre as a head case, but Hilary starts out as a more subtle example of the type and builds up to full blown insanity, when we find him wild-eyed and wielding a hammer against his dismembered nemesis. J. Carroll Naish also deserves special attention as the police chief, who brings some levity to the situation but is smart enough to figure out the case. Naish invests the character with so much personality that we aren't surprised when he gets the picture's closing scenes. The young couple played by Andrea King and Robert Alda are there for the romance and to give us someone to root for, with Alda's somewhat shifty character a nice change from the usual straight arrow types who fill this role. In contrast to them we get Charles Dingle and John Alvin as Ingram's obnoxious brother-in-law and  nephew, who are both so mercenary that the audience longs to see the hand get a grip on them. Victor Francen doesn't have many scenes before his character gets killed, but he does a fine job setting the stage for the vengeful hand with his virtuoso airs.

Two additional elements, special effects and music, make The Beast with Five Fingers memorable. Several techniques bring the hand to life, and we see it accomplish all kinds of strange feats, from playing the piano to crawling across the floor. It's very similar to Thing from The Addams Family, but instead of being played for laughs this hand gives us the creeps. Its escape from the pianist's tomb evokes a marvelous sense of dread, and the one-handed corpse gripping a knife in its remaining fingers suggests a gruesome act of post-mortem determination. Because the hand has to play by itself, piano music performed with one hand dominates the musical score, especially Bach's haunting "Chaconne in D Minor," as transcribed by Brahms. We first hear it played by Ingram; later, the restless hand performs the piece, with the intensity reaching its peak during the film's climax. Max Steiner, best remembered for creating the iconic theme for Gone with the Wind (1939), elevates this production by making us take the musical aspect seriously, with the score for the other scenes also heightening the charged atmosphere.

For more hand horror with Peter Lorre, see Mad Love (1935), in which the actor really gets to cut loose with his madman persona. Other horror movies featuring J. Carroll Naish include Dr. Renault's Secret (1942) and House of Frankenstein (1944), but you'll also find him playing Sitting Bull in Annie Get Your Gun (1950) and Sitting Bull (1954). Robert Florey directed The Marx Brothers in The Cocoanuts (1929) and Bela Lugosi in Murders in the Rue Morgue (1932).
Posted by Jennifer Garlen at 7:04 PM