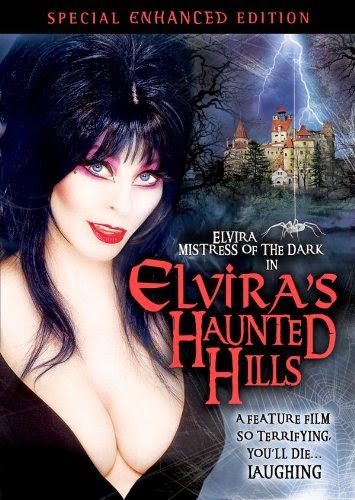 Serendipity led me to watch the 2001 horror-comedy Elvira's Haunted Hills this week, immediately after several nights running of Roger Corman classics. The Elvira picture popped up on Hulu Plus; I wasn't planning to watch it but figured "Why not?"since I like Elvira's oddball style well enough that I own the Elvira: Scared Stiff pinball machine (come on over sometime and you can play, too). I hadn't seen Haunted Hills before, but imagine my delight when it turned out to be a loving parody of two movies I had just seen: House of Usher (1960) and The Pit and the Pendulum (1961)!

Seriously, Richard Matheson really deserves a writing credit for Elvira's Haunted Hills because whole chunks of dialogue are lifted directly from the older movies. The plot splices together the Roger Corman versions of two classic stories by Edgar Allan Poe, with much more emphasis on Corman than Poe. There's some Dracula (1931) thrown in for good measure, along with a string of other gags that mock familiar films and tropes. The result is sort of a mess, but it's a funny mess, especially if you recognize the source material and the way the Elvira film turns it to comedic purposes.

Elvira plays herself, naturally, roaming around 19th century Carpathia en route to Paris and her showbiz career. Along with her French maid, Zou Zou (Mary Jo Smith), Elvira accepts a carriage ride from randy Dr. Bradley (Scott Atkinson) and ends up at Castle Hellsubus, where she meets Vladimere Hellsubus (Richard O'Brien), his wife (Mary Scheer), and his consumptive niece (Heather Hopper). Vladimere suffers from acute sensitivity and an obsession with his dead wife, Elura, whom Elvira happens to resemble. Weird mayhem ensues, along with a fair bit of randy humor, which is just what one expects from Elvira.

This is goofy, low-budget stuff, but it's clear that Cassandra Peterson and her director, Sam Irvin, share a deep love for the Corman Poe movies. The picture is even dedicated to Vincent Price, who played the lead characters in Corman's films. Richard O'Brien, best known for The Rocky Horror Picture Show (1975), offers his own take on the Price characters but certainly seems to be having a lot of fun. He looks more like Nosferatu but doubles down on psychological infirmities with Roderick Usher's hypersensitivity and Nicholas Medina's morbid obsession with his deceased bride. The wan Lady Roxana, aka "Catalepsy Poster Child," wickedly skewers the Poe motif of the dying maiden, while Lady Ema takes her cues from Cloris Leachman's Frau Blucher in Young Frankenstein (1974) but still evokes the Gothic wives of the Corman pictures.

For the best experience with Elvira's Haunted Hills, do watch House of Usher and The Pit and the Pendulum first, perhaps over the Halloween weekend. Then you can really revel in the allusions and jokes the way God and Cassandra Peterson intended.

Posted by Jennifer Garlen at 2:58 PM