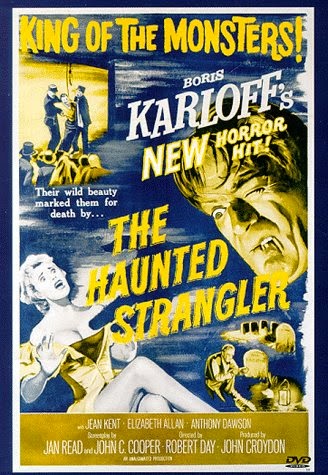 Directed by Robert Day, The Haunted Strangler (1958) comes from the later part of Boris Karloff's career, long after his iconic roles in Frankenstein (1931) and The Mummy (1932). Karloff churned out modest chillers for decades, and he's usually the best thing in them, but The Haunted Strangler gives him a particularly good role as a Victorian novelist trying to uncover the truth about an old murder case in which the wrong man might have been hanged. The eloquent, intelligent Karloff is on full display here, but fans of the horror star's more monstrous side will also find plenty to appreciate.

Karloff plays reform-minded writer James Rankin, who hopes to show the flaws of the legal system by proving that innocent men are executed for other people's crimes. He begins investigating the conviction of Edward Styles as a serial killer called The Haymarket Strangler, although his young assistant, Ken (Tim Turner), doubts the point of his efforts. As he digs deeper into the past, Rankin unwittingly resurrects the real killer, long hidden from view, and new murders precede the revelation of a shocking connection between the intellectual author and the bestial criminal.

The story opens like a police procedural revolving around a cold case, with Rankin and Ken mulling over files, clues, and autopsy reports. They interview witnesses and anyone else connected with the crime, including the residents of The Judas Hole, the seedy dance hall where the final murder took place. There they find Cora (Jean Kent), who was the dead woman's friend, and her pretty apprentice, Pearl (Vera Day). Cora piques Rankin's interest in the mysterious young Dr. Tenant, who frequented The Judas Hole and was involved in the original investigation but disappeared after Styles was hanged. Once The Judas Hole characters are introduced, the plot shifts into the territory of more traditional horror. The murderer returns to spill fresh blood, the search for the killer becomes urgent, and Rankin finally begins to suspect the awful truth. Even worse, his wife Barbara (Elizabeth Allan) and stepdaughter Lily (Diane Aubrey) become targets of the deranged fiend, and even the police cannot protect them.


Along with Karloff's keen performance, thoughtful cinematography and an emphasis on psychology also elevate The Haunted Strangler above the lurid premise of its title. The opening scenes depict a Hogarthian tableau of the gathered rabble's indifference to justice and suffering, prompting us to sympathize all the more with Rankin's humanitarian quest. The can-can sequences also offer a visual contrast between the animal pleasures of the masses and the intellectual refinement of the idealistic gentleman. These images both confound and prefigure the later motif of the suppressed id breaking through to wreak havoc on a carefully ordered and civilized life. Robert Louis Stevenson provides obvious inspiration for the narrative's thrust, but The Haunted Strangler offers its own take on the well-worn tale, merging its Freudian concerns with Jack the Ripper mania and the unconscious transgressions of the involuntary monster.

While it's Karloff's movie from start to finish, be sure to note career villain Anthony Dawson playing against type as the Scotland Yard policeman. Robert Day directed The Green Man (1956), several Tarzan films, and the 1965 version of She starring Ursula Andress. Day's Corridors of Blood (1958) also stars Karloff and makes for a fine double feature with The Haunted Strangler. For more Karloff horror in a similar vein, try The Body Snatcher (1945) and Bedlam (1946) from the Val Lewton canon.

The Criterion release of The Haunted Strangler, which looks fantastic, is available for streaming on Hulu Plus.
Posted by Jennifer Garlen at 4:08 PM