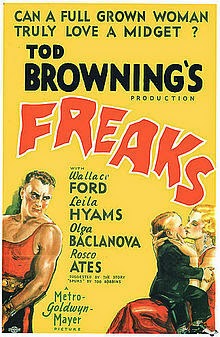 Tod Browning made a lasting mark on the horror genre with Dracula (1931), but Freaks (1932) is by far the stranger and more inventive of the two films. The director had explored the circus before with Lon Chaney silents like The Unholy Three (1925) and The Unknown (1927), as well The Show (1927) with John Gilbert and Lionel Barrymore, but Freaks goes beyond those earlier efforts by casting actual sideshow performers along with more typical stars. The result remains controversial more than eighty years later; Freaks proved shocking in its own time but may smack too much of exploitation for some modern viewers, even though it works hard to show that its good characters treat the title attractions with humanity and kindness, while its villains mock and reject them. Whatever we make of it, Freaks remains an essential film, one that every cinephile interested in Pre-Codes and classic horror must see at least once.

The story follows various romantic entanglements in the tents of the circus folk. Hans (Harry Earles), a little person, is engaged to the equally tiny Frieda (Daisy Earles) but becomes smitten with seductive trapeze artist Cleopatra (Olga Baclanova). She and her strongman lover, Hercules (Henry Victor), delude Hans in order to get his money, with Cleopatra even marrying her small admirer, whom she then plans to poison. Meanwhile, circus clown Phroso (Wallace Ford) and pretty Venus (Leila Hyams) strike up their own romance; they both look out for the sideshow crowd and consider them friends. When Venus threatens to tell the cops about Hercules and Cleopatra, she, Hans, and Phroso all end up in mortal danger, but the circus freaks have their own plans for the cruel, murderous pair.

With their costumes, physical traits, and exotic accents, the career actors in Freaks can be hard to tell apart from the actual circus performers, and perhaps that is intentional on Browning's part. The most ordinary of the bunch are Wallace Ford and Leila Hyams, whose generosity and kindness mark them as kindred spirits despite their hard scrabble lives. The Russian Olga Baclanova puts her foreign appeal to good use as the cold-hearted Cleopatra; her character stands apart from the freaks, literally above them, but the actress fits perfectly in the circus setting. Her dalliance with the German Henry Victor feels like a symbolic union of Eastern menace, especially since Victor went on to play a long string of Nazi roles. Hiding in plain sight is stuttering comedian Roscoe Ates as a circus clown married, awkwardly enough, to a conjoined twin. He, too, fits in with the circus, even though he was an important enough actor to get fourth billing on the film. Despite being under three feet tall, Angelo Rossitto is also one of the movie's professional actors; he racked up 90 screen credits in a career that lasted sixty years. Other, smaller roles are quietly filled by professionals, with Rose Dione as Madame Tetrallini and Edward Brophy as one of the Rollo brothers.

Browning's special cast of actual circus performers begins with Harry Earles, who had made his movie debut in The Unholy Three. He and his real life sister, Daisy, act surprisingly well, and the story depends on them to sell their characters' hopes and heartbreak. They can't pretend they aren't German, but they use that to their advantage; unlike Hercules and Cleopatra, Hans and Frieda seem more vulnerable and lonely because of their foreignness. Their small stature makes them look very young, but Harry was thirty in 1932, and Daisy was twenty-five; both continued circus work for many years and eventually retired. Also acquitting themselves well are the conjoined twins Daisy and Violet Hilton and "half boy" Johnny Eck, although they are overshadowed in the public memory by Schlitze, the Snow sisters, and the limbless Prince Randian. Other sideshow veterans include armless girls, a bearded lady, a human skeleton, and Josephine Joseph, but the film shows us the very ordinary human lives of these people, who chat and have feelings and raise families just like anyone else. If the picture's gruesome climax paints a different image, with its small, grim figures creeping through the mud, Browning at least tries to suggest that they are really just an oppressed and unfairly treated group of people looking out for their own and dishing out some thoroughly warranted poetic justice.

Freaks was banned, recut, denounced, and relegated to vaults for decades; the version you'll find today is not the original work that Browning intended, and the more upbeat ending was a late addition. Modern viewers are unlikely to have the same response that audiences did in 1932; we are too accustomed to a constant diet of visual spectacles, but still Freaks stands out as something unique in the history of film. For more from Tod Browning, try West of Zanzibar (1928), Mark of the Vampire (1935), and the weirdly wonderful The Devil-Doll (1936). Olga Baclanova plays another cruel temptress in The Man Who Laughs (1928), while Leila Hyams faces bestial threats in Island of Lost Souls (1932). Violet and Daisy Hilton made one other screen appearance in Chained for Life (1952), which capitalizes on their experiences as conjoined twins and adds a murder plot twist. Look for Angelo Rossitto in The Beloved Rogue (1927), Spooks Run Wild (1941), and, decades later, Mad Max Beyond Thunderdome (1985).
Posted by Jennifer Garlen at 1:36 PM