Classic Films in Focus: WHATEVER HAPPENED TO BABY JANE? (1962) 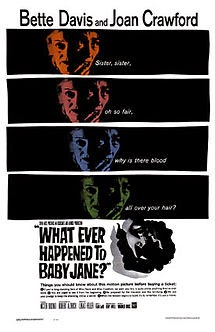 Robert Aldrich's quintessential example of Grande Dame Guignol is often discussed for its value as camp, but Whatever Happened to Baby Jane? (1962) offers genuine horrors as well as pitch black comedy. Bette Davis and Joan Crawford, fierce rivals and determined survivors of the Hollywood fame machine, invest their characters with layers of psychological depth that lesser actresses could never achieve, and the result is a horror film that stirs the imagination long after the terrible irony of the final scene. Like Sunset Boulevard (1950), Baby Jane is a story about the fickle nature of stardom, but it's also a dark fairy tale of sibling rivalry pushed to murderous extremes. You may watch it for camp and laugh at Davis' shrieking hag, but the true genius of Baby Jane reveals itself in the quieter moments, where we witness the awful power of jealousy, love, and hate to wreak havoc on human souls.

Davis plays former child star Baby Jane Hudson, whose heyday on the Vaudeville stage gave way to failure as a screen actress once she grew up. Crawford is her sister, Blanche, once the jealous wallflower but later a huge Hollywood success. Blanche's career ended when a mysterious car accident paralyzed her legs, and years later she is confined to a wheelchair and dependent on the increasingly unstable Jane. Jane's outrageous abuse makes Blanche fear for her life, but a terrible secret binds the two sisters together in a fatal knot of guilt and resentment.

The garish white face of Baby Jane is one of the picture's most iconic elements, along with the infamous rat on a tray, and it might seem like a bizarre moment in Bette Davis' career for those unfamiliar with her particular talent for transforming herself into monstrous objects of pity and revulsion. Take it instead as part of a whole that reaches back to Of Human Bondage (1934) and Marked Woman (1937) and continues through Now, Voyager (1942) and Mr. Skeffington (1944). Davis revels in this kind of role, and it shows in her sharp, poignant performance. Her Jane is as much Blanche DuBois as Norma Desmond, not merely a crazed harridan but a broken soul that longs for acceptance and even love. In the tradition of all great monster performers, Davis works hard to make us feel the tragedy beneath the horror. Jane was young once, beautiful and beloved. If she has fallen so far, there must be dreadful reasons for it, which the film itself will only tease us with, even in the confessional moments of the closing scene. Davis invites us to consider the hidden things, the slow decline of Jane's mind and the toll of living with Blanche all those years.

Joan Crawford plays a subtler psychological game as Blanche, wearing her terrified martyr face but leaning on that buzzer with a vengeance. Without the opening scenes, where young Blanche eyes her sister and father with steely hatred, we might be inclined to believe that Blanche is merely the victim here, the sweet and tragically crippled star pining for a quiet life with her devoted maid, Elvira (Maidie Norman). Gina Gillespie, who plays Blanche as a child, gives a short but critical performance that warns us not to take Blanche's act at face value. Crawford's Blanche is consciously playing a role, but that buzzer shatters Jane's fragile mind at every opportunity, as shrill and profane as Blanche pretends to be long-suffering and refined. Only at the end do we understand the extent of Blanche's responsibility for the fate that befalls her, but then we see her own mask of virtue set aside, as much a false face as Jane's gruesome paint.

Other performances are also worth noting. Victor Buono earned an Oscar nomination for his avaricious, amoral Edwin Flagg, and he has a screen presence reminiscent of Laird Cregar in his sleazier villain roles. Maidie Norman is simply brilliant as Elvira, who distrusts crazy Jane but falls hook, line, and sinker for Blanche's assumed sweetness. Anna Lee provides some context and contrast as the neighbor, Mrs. Bates, who remembers Blanche Hudson's stardom but also reminds us of the normal life that neither sister got to have. Julie Allred, all blonde curls and bad attitude, provides a perfect introduction to Jane as the child star at the height of her career; her temper tantrum at the backstage door is quite a moment, with a deliciously dark connection to the movie's final scene. Oddly enough, Bette Davis' daughter, Barbara Merrill, appears as Mrs. Bates' teenage daughter; her scathing tell-all book about her famous mother was still more than 20 years away, but she would marry at the age of sixteen the year after Baby Jane was released.

In a rare showing of Academy enthusiasm for a horror film, Whatever Happened to Baby Jane? won an Oscar for Best Costume Design, with four more nominations, including a nod for Davis as Best Actress. Ernest Haller's cinematography also picked up a well-deserved nomination. Davis and Aldrich reunited for Hush... Hush, Sweet Charlotte (1964), but Crawford famously dropped out and was replaced by Olivia de Havilland. For more from Aldrich, try Vera Cruz (1954), Kiss Me Deadly (1955), and The Dirty Dozen (1967). See more Bette Davis horror in Dead Ringer (1964), The Nanny (1965), Burnt Offerings (1976), and The Watcher in the Woods (1980). Crawford's late career also includes horror films like Strait-Jacket (1964), I Saw What You Did (1965), and the infamous Trog (1970), which would be her final film credit.
Posted by Jennifer Garlen at 5:43 PM