This post is part of the CMBA Blogathon: Fabulous Films of the 50s. Visit the Classic Movie Blog Association's website for links to all of the participating blogs! 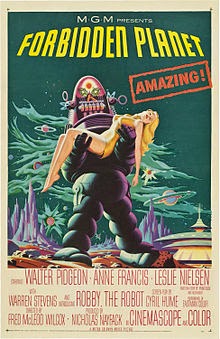 The 1956 science fiction classic Forbidden Planet is like one of those desserts that secretly has spinach or wheat germ in it. On the surface, it's a wildly imaginative influential genre landmark with cool robots, a scary monster, and a hot young Anne Francis in some very short dresses. It's also, however, a thoughtful Freudian revision of Shakespeare's The Tempest in which science and magic become different terms for the same concepts and the nature of monstrosity is internalized to depict the ways in which ambitious people become corrupted by their own power. It's this dual nature of the film that makes it such an enduring classic as well as one of my all-time favorite movies.

Granted, Forbidden Planet gets off to a bit of a slow start, but once it picks up it really keeps going. We have Leslie Nielsen looking serious and heroic as Commander Adams when his team starts turning up dead, killed by the same mysterious creature that wiped out the previous colonists. We get Walter Pidgeon gloriously sombre as the brilliant scientist, Dr. Morbius, and Anne Francis embodying the very definition of pulchritude as his daughter, Altaira. Best of all, we have Robby the Robot, a walking, talking vision of the future as only the 1950s could imagine it. What's not to love?

Now, the sneaky Shakespearean content begins to appear. In The Tempest, the powerful sorcerer Prospero and his daughter Miranda are trapped on a remote island, much like Morbius and Altaira. In both tales a ship arrives, filled with puzzled newcomers, and one of them rapidly develops a passion for the sheltered girl. Prospero's helpful spirit, Ariel, is recast as the docile but remarkable Robby, while the dangerous monster Caliban is transformed into the planet's invisible lurking evil.

Forbidden Planet gives a Freudian twist to the narrative by making its monster an uncontrolled embodiment of the id, the dark, brutish part of Morbius that the scientist thinks he has banished by his experiments with advanced alien technology. As it turns out, Morbius has only accomplished a Jekyll and Hyde kind of separation of the higher and lower parts of his nature; without the yoke of his rational and ethical thoughts, the id runs amok. This, too, has its roots in Shakespeare. Near the end of the play, Prospero says of Caliban, "This thing of darkness I acknowledge mine," and that acknowledgement is precisely what is required of Morbius in order to save his daughter and Commander Adams' remaining men.

While the movie had a profound influence on later science fiction with its visual effects and its iconic robot, Forbidden Planet also shows the depth and breadth of Shakespeare's legacy. That's an impressive one-two punch, to do something radically new that changes a whole genre while still reveling in the ability of something old to have relevance and meaning. It's a movie for science fiction fans and for Shakespeare fans. English majors and engineers can reach across the table and shake hands over a film like this one. I like to think that, in the long run, Forbidden Planet helped to make science fiction smarter, deeper, and more conscious of its literary nature as well as its science. O brave new world, that has such movies in it!

By the way, if you're a fan of Shakespeare and Forbidden Planet, be sure to have a look at the hilarious stage musical, Return to the Forbidden Planet. I had the good fortune to see it performed by the American Shakespeare Center several years ago, but you can find videos from various performances of it on YouTube.

Forbidden Planet and The Tempest are also the underlying influences in my short story, "This is Not a Life," which you'll find on Amazon.com. It helps if you know something about Magritte, too.
Posted by Jennifer Garlen at 12:55 PM