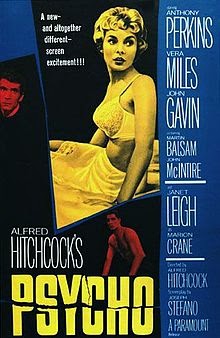 Alfred Hitchcock’s Psycho (1960) marks the arrival of the slasher genre on the Hollywood horror scene, and today it retains a powerful hold on the public imagination, even though the movie itself is quite tame by modern standards. Because the picture has become so familiar, even to people who aren’t necessarily fans of old movies or Hitchcock, it’s almost impossible to watch Psycho now without knowing all of its major twists and turns. We can’t recapture the suspense of seeing it the way audiences did in 1960, but we can still appreciate its iconic Bernard Herrmann score, its diabolical cinematography, and the absolutely brilliant performance of Anthony Perkins as one of cinema’s most dangerously devoted sons. It isn’t Hitchcock’s best or smartest picture, but Psycho remains essential viewing for all serious cinephiles, especially those interested in the history of horror.

Perkins plays the boyish Norman Bates, an amateur taxidermist and the proprietor of the largely empty Bates Motel. His establishment attracts Marion Crane (Janet Leigh), a Phoenix secretary who has skipped town with $40,000 of her employer’s money and is on her way to find her divorced lover, Sam (John Gavin), whom she hasn’t been able to marry because of his alimony payments. Marion’s sister, Lila (Vera Miles), and a private detective (Martin Balsam) both set out to track Marion down, and their investigations lead them to the Bates Motel, where Norman’s mysterious mother seems to be the key to finding out what has become of Marion and the missing money.

Much has been made of the brevity of Janet Leigh’s screen time as the picture’s ostensible leading lady, but from the moment he first appears Psycho is really Anthony Perkins’ movie, and his performance gives the film its chilling appeal. His Norman is so vulnerable and eager to please, but the intensity of his personality lurks just below the surface of his puppyish amiability. With Perkins’ assistance, Hitchcock lures us into liking Norman and sympathizing with him, even after the first murder takes place. Norman’s efforts to clean up Mother’s mess reveal his revulsion at the sight of blood, his discomfort with a naked woman’s body, and his determination to protect the object of his adoration, no matter how badly she treats him. Madness or monstrosity by themselves are mere bugbears; Norman’s fragile, sensitive humanity makes him fascinating and, ultimately, all the more disturbing, because we find ourselves sharing his perspective. The final, shocking scene jolts the audience by revealing just how deranged that perspective has become.

As a technical accomplishment, Psycho demonstrates the ways in which camera angles, editing, and scoring help to create effective horror and suspense, especially in the infamous shower scene, where viewers often imagine seeing a lot more than is actually on display. It would be naive, however, to claim that Psycho is a perfect movie. The menacing Bates house, so much more evocative than the bland motel, is rather underused, and the psychiatrist’s scene near the end drags on like a high school lecture. With only two murders in the entire movie, the second one might have benefited from a little more time and attention, even if it doesn’t provide the salacious voyeurism of the first. Finally, Vera Miles and John Gavin are not especially interesting as Lila and Sam; they don’t have any chemistry with each other, and their mundane, middle-class American characters leave us unconcerned for their welfare. They’re just cogs in the plot machine, like so many characters in later and lesser slasher films, and we know that Hitchcock could have done more with them than that.

Psycho earned four Oscar nominations, including a Best Director nod for Hitchcock, but it went home empty-handed in a year dominated by Billy Wilder’s The Apartment (1960). For contrast, read the original novel by Robert Bloch or endure the generally panned 1998 remake starring Vince Vaughn. Anthony Perkins starred in a couple of Psycho sequels and never really escaped the typecasting that followed the role, but you can see him in a different light in Friendly Persuasion (1956), Desire Under the Elms (1958), and The Trial (1962). Catch Janet Leigh in Touch of Evil (1958), and look for more of Vera Miles in The Man Who Shot Liberty Valance (1962). See Shadow of a Doubt (1943) for an earlier Hitchcock foray into serial killer territory.
Posted by Jennifer Garlen at 2:44 PM