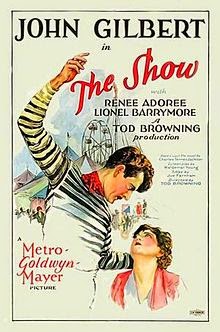 Horror maestro Tod Browning is in familiar territory in The Show (1927), which takes place in a community of Budapest carnival performers. Although much of the movie falls more into the category of melodrama, Browning revels in the opportunity to stage images of the disturbing, the extraordinary, and the truly bizarre, and fans of Browning’s work will certainly see the parallels to films like The Unholy Three (1925), The Unknown (1927), and, of course, Freaks (1932). John Gilbert, Lionel Barrymore, and Renee Adoree star in this silent shocker about a deadly love triangle, which holds up well despite some unintentional hilarity from an unusual animal costar.

Gilbert plays the skirt-chasing Cock Robin, a sideshow barker and performer who uses his charm with the ladies to attract the foolish daughter of a wealthy sheep farmer. Barrymore’s character, known only as The Greek, is a dangerous criminal who jealously watches the attention that Cock Robin receives from his lover, the beautiful dancer Salome (Renee Adoree), who used to be Cock Robin’s girl. Determined to get rid of his competition, The Greek devises a series of bizarre schemes to kill Cock Robin, who has enough problems already thanks to his mercenary entanglement with the farmer’s daughter.

All three of the principals perform their roles beautifully, projecting their characters’ emotions as only silent stars can. John Gilbert, devilishly handsome in his striped shirt and fitted pants, makes us see what the ladies love about the aptly named Cock Robin even though he behaves like a heel. His charisma helps to explain Salome’s helpless attraction to a man who mistreats her so cruelly, although Cock Robin might as well be a saint compared to The Greek. There’s something sadistic, even sociopathic, about Lionel Barrymore’s bright, steely eyes as he imagines his gruesome revenge on Cock Robin. Everybody is afraid of him, and with good reason, too. Renee Adoree plays Salome as a complex character, sometimes a temptress, as her name and stage role suggest, but at other times a patient martyr, a voice of reason, and a steadfast protector. If her sexy carnival costume doesn’t quite become her, it’s because her true nature differs so greatly from the role she has to play; she looks most beautiful when her eyes fill with tears of suffering, love, and compassion.

With the sideshow as the setting for this romantic melodrama, Browning has room for plenty of bizarre touches. Cock Robin and Salome perform a recreation of the beheading of John the Baptist, which ends with Salome kissing the mouth of the decapitated but still living victim. The show also includes an assortment of fake freaks, the most striking of which is the Spider Woman staring balefully from the center of her web. The horrific teeters over into the hilarious, however, when a deadly Gila monster is introduced as The Greek’s weapon of choice against Cock Robin. The poisonous animal is played in the movie by a rather energetic iguana, who leaps onto his victims as if he has been shot from a catapult. When The Greek finds himself trapped in a closet with the angry animal, it’s a moment of poetic justice, but watching Barrymore react to the iguana provokes laughter much more than horror. Perhaps iguanas were less familiar when the movie was made, but whatever audiences in 1927 might have thought of the reptile, it’s sure to be one of the movie’s most memorable elements for modern viewers.

The Show is currently available for streaming on Warner Archive Instant.
Posted by Jennifer Garlen at 9:57 AM