Classic Films in Focus: THE THIEF OF BAGDAD (1940) 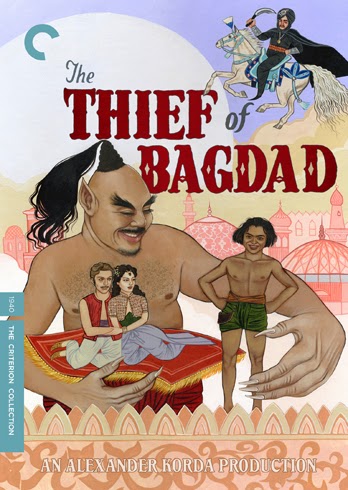 Producer Alexander Korda’s lavish revision of the 1924 silent version of The Thief of Bagdad marks a key moment in the evolution of the fantasy adventure film. It would prove an inspiration to imaginative filmmakers for generations to come; its influence is clearly seen, for example, in the Sinbad movies of Ray Harryhausen, himself an iconic figure in the history of fantasy films. Shot in sumptuous color and bursting with visual delights, The Thief of Bagdad thrills viewers of all ages with its magical creatures and daring escapes, but youngsters will especially appreciate the role of child star Sabu as the plucky thief who gives the story its human interest as well as its title. The movie benefits further from the efforts of a team of directors, including Michael Powell, and memorable performances from Conrad Veidt, June Duprez, and Rex Ingram.

Sabu plays Abu, the loyal companion of lovestruck hero Ahmad (John Justin), whose passion for a beautiful princess (June Duprez) carries the pair into many trials and adventures. Ahmad’s corrupt vizier, Jaffar (Conrad Veidt), first usurps Ahmad’s throne and then tries to win the princess for himself, even bribing her foolish father with a mechanical flying horse. Dark magic and corrupt political power repeatedly enable Jaffar to thwart Ahmad and Abu, but the discovery of a genie (Rex Ingram) and a magical stone offer the heroes some much needed assistance.

The film features an impressive array of special effects that bring its locations and creatures to life, although some techniques are so subtly employed that most viewers will never recognize them. Wide shots of huge fantasy settings use hanging miniatures and matte paintings brilliantly; we perceive the colorful towers of Arabian cities and a giant statue as real things rather than mere illusions, which draws us into the world and encourages us to invest in its characters. The fabulous beings who populate this landscape get our attention more readily, for they are creatures calculated to inspire amazement. A mechanical steed comes to life and carries its riders into the sky, a silver statue seduces and then kills with half a dozen arms, and an enormous genie emerges from his bottle to fill the screen and frighten tiny Abu. A few of these effects scenes reveal their age, especially around the edges, but they were groundbreaking accomplishments in 1940, and they still have the power to charm and surprise a generation brought up on computerized cinematic spectacles.

The performances of the human actors help to sell this story of exotic enchantment. Conrad Veidt projects hypnotic menace as the evil Jaffar, a villain of great cunning and power, while June Duprez is lovely enough to justify all of the attention she gets from both Jaffar and Ahmad. John Justin, making his very first screen appearance, plays Ahmad as affable, romantic, and sincere, especially during his blind beggar phase. He has just a touch of roguish charm to liven up his character without stealing Sabu’s thunder. A jovial Rex Ingram makes the genie a highlight of the picture, and Miles Malleson, who also wrote the screenplay, has a memorable role as the toy-obsessed sultan. Foremost of all, however, is Sabu, the Indian child actor who had first appeared in Korda’s Elephant Boy in 1937. With his mischievous grin and youthful charisma, Sabu brings a street urchin’s perspective to the grand calamities of the adult world. He’s funny, energetic, and boyishly handsome, a more exotic version of Tom Sawyer or Peter Pan. It’s easy to see why Korda was eager to capitalize on the sixteen year old’s appeal by building pictures around him.

The Thief of Bagdad won three Oscars, for Cinematography, Art Direction, and, most deservedly, Special Effects. Sabu, like many child stars, did not enjoy much success as an adult actor, but his other early films include Drums (1938), Jungle Book (1942), and Black Narcissus (1947). Conrad Veidt, best remembered as a Nazi in Casablanca (1942), can also be found tackling a sinister role in A Woman’s Face (1941). Look for June Duprez in None but the Lonely Heart (1944) and for Rex Ingram in The Adventures of Huckleberry Finn (1939) and Anna Lucasta (1958). Don’t miss Miles Malleson, one of the most prolific actors in the cast, as Dr. Chasuble in The Importance of Being Earnest (1952). Be sure to point out to young viewers the remarkable similarities between The Thief of Bagdad and Disney’s Aladdin (1992); Sabu’s protagonist gets downgraded to a monkey sidekick, but many of the plot elements and characters are exactly the same.

The Thief of Bagdad is available on DVD from the Criterion Collection and is currently included in the Criterion streaming catalog on Hulu Plus.
Posted by Jennifer Garlen at 12:44 PM