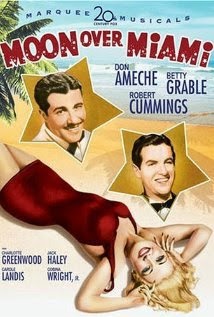 Walter Lang’s musical comedy is another of the frothy, fun Technicolor amusements produced by Fox during the early 1940s, with the usual assortment of studio players and plenty of eye candy in the form of pretty girls, glamorous costumes, and lively dance sequences. This one actually has more plot than several of its peers, but Moon Over Miami (1941) also benefits from very winning performances by its leading ladies and supporting cast. Fans of Betty Grable will find a lot to like in her turn as the gold-digging heroine, and other notable performers include Carole Landis, Don Ameche, and Robert Cummings, with scene-stealing appearances by character actors Charlotte Greenwood and Jack Haley. Intentionally light and airy, Moon Over Miami promises nothing more than a good time, which it dutifully and energetically delivers.

Grable and Landis star as sisters Kay and Barbara Latimer, who leave Texas for Miami with a plan to snag a wealthy husband for Kay. With their aunt Susan (Charlotte Greenwood) posing as their maid, the girls take up residence in a posh resort, where Kay soon meets the suitably rich Jeff Boulton (Robert Cummings) and his friend, Phil McNeil (Don Ameche). The two men compete relentlessly for Kay’s attention, but Jeff also attracts Barbara’s admiration, and Kay has to choose which suitor to lure into a proposal. All the while, the truth about the girls’ finances and intentions threatens to get out, especially with hotel waiter Jack (Jack Haley) constantly hanging around Susan.

The classic narrative structure of the romantic comedy dictates the course of this story, which has its obligatory pairs of lovers, counterpoint clowns, and Forest of Arden atmosphere. Grable and Ameche, as the primary leads, are of course destined to be together, although their road to union proves riddled with potholes shaped like dollar signs. Landis and Cummings make a more subdued secondary couple; her quiet interest in him is telegraphed early on, but it takes his flighty character a long time to see what’s right in front of him. Of the four principal actors, Landis has the smallest role but also the most nuanced one; disguised as her sister’s secretary in glasses and sensible shoes, Barbara is more introverted than Kay but also kinder, more thoughtful, and more sincere. The funny stuff happens when Greenwood and Haley get together; their big number, “Is That Good?” is a highlight of the picture, with Greenwood launching into her signature high kicks and Haley making those most of his big, expressive eyes.

The movie includes a number of memorable dance sequences, thanks to the efforts of choreographer Hermes Pan, who makes his own appearance on screen as Betty Grable’s partner during the “Kindergarten Conga” piece. Grable does part of the dance for “You Started Something” sitting down, which is an entertaining twist on the usual routines; her partners during this segment are the impressive specialty dancers, the Condos Brothers, who appear again in the Seminole dance near the end of the picture. Don Ameche’s performance of the song, “I’ve Got You All to Myself,” is also fun because it opens a zany montage of the two rivals constantly horning in on each other’s dates with Kay, which culminates with a memorable shot of a shirtless Robert Cummings underwater. Ameche actually sings quite a bit in this picture, more than any other performer, but his delivery is predictably good, and his songs are well-integrated into the flow of the story.