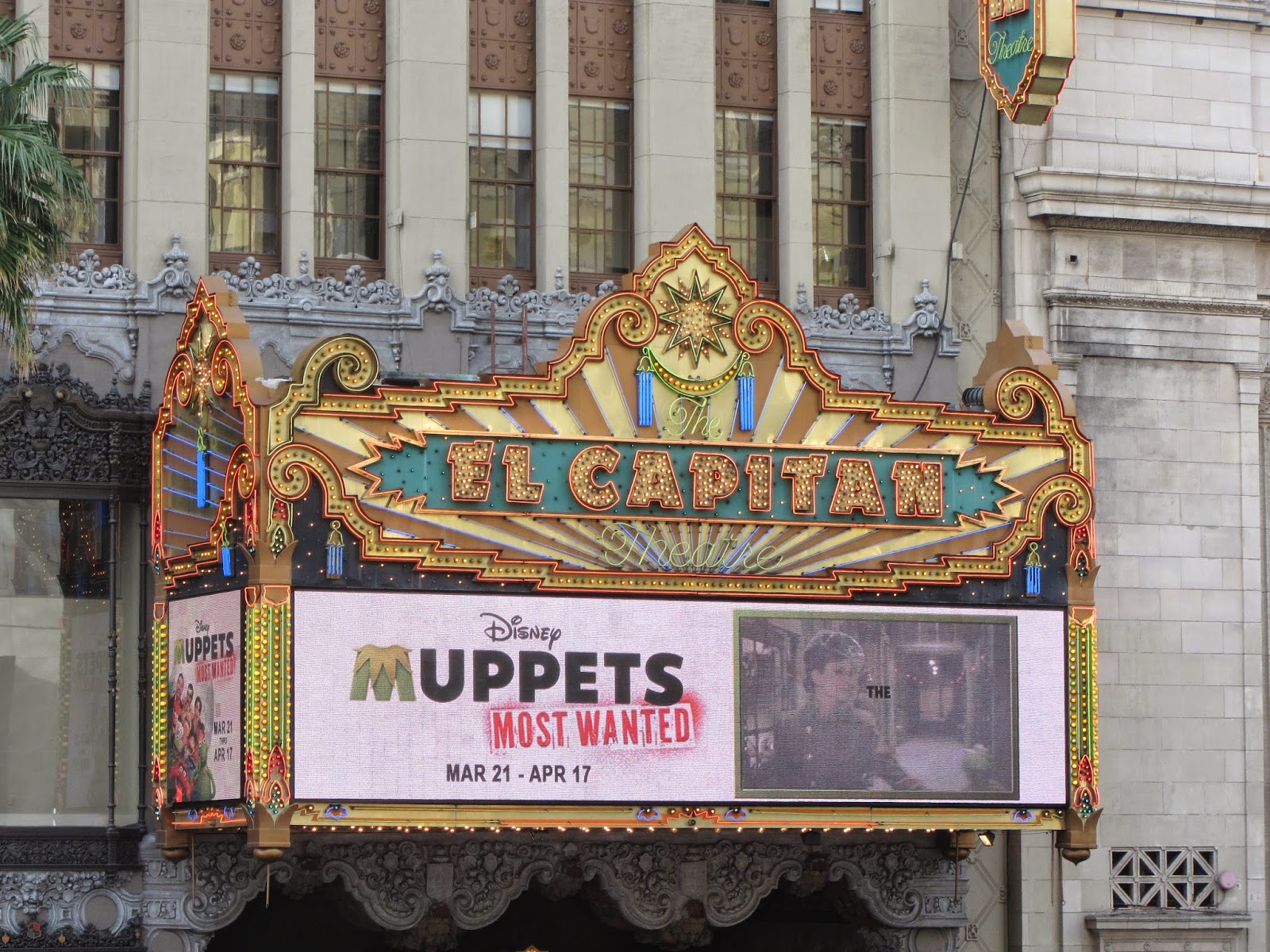 We take our movies and our Muppets pretty seriously at our house, so I can't claim that I was surprised when the Kid declared that she wanted a Muppet-themed birthday party this year. Her trip to see Muppets Most Wanted at Disney's El Capitan Theatre in Hollywood had been quite the religious experience (for her and for me!). Surely, I thought, with a brand new movie out, Disney would have some Muppet themed party supplies on the market. The party would be easy! 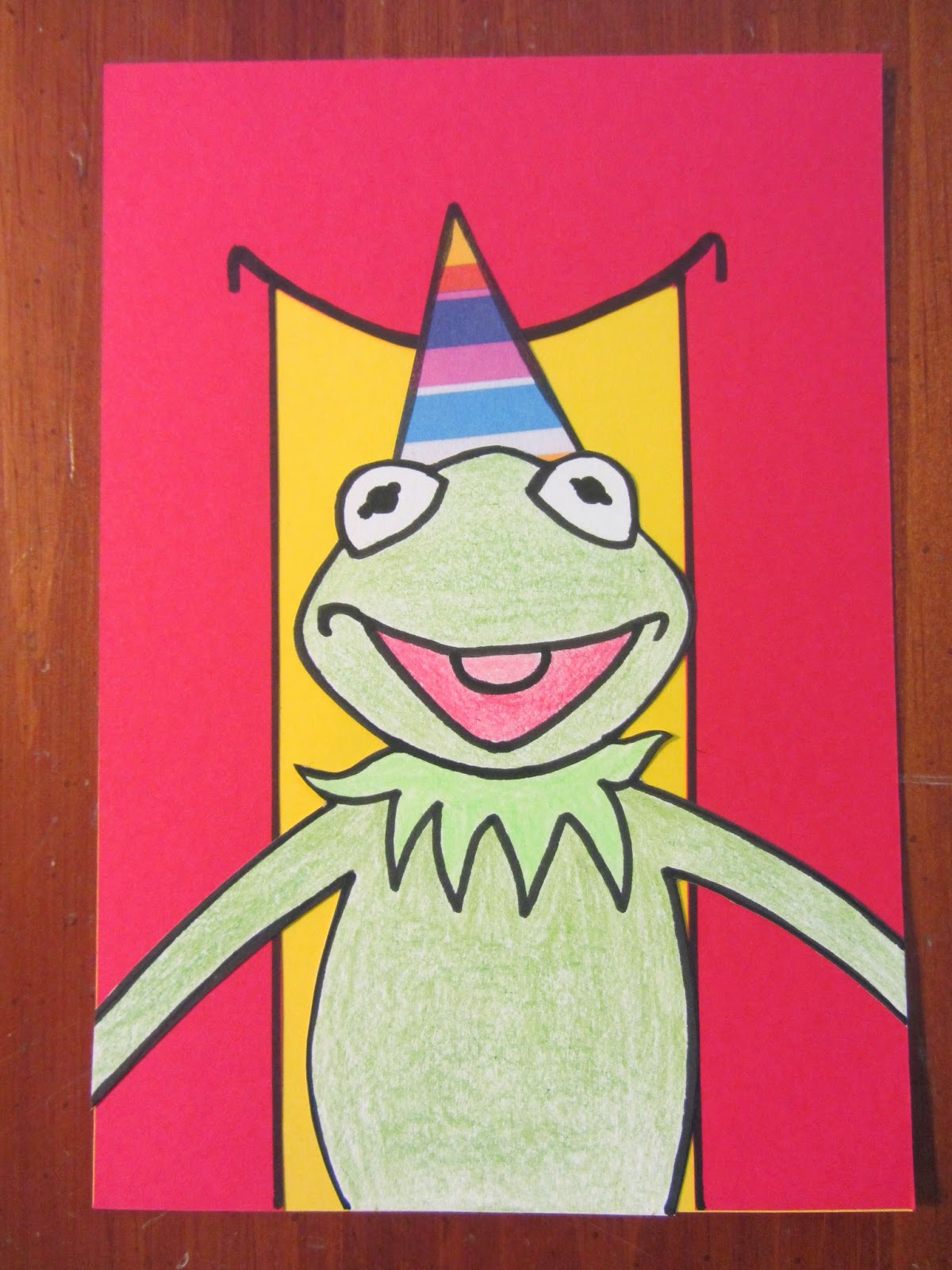 Alas, no. Although Disney has done a good job getting more Muppet merchandise into the pipeline in a general way, apparently it never occurred to them that kids might want Muppet-themed birthday parties in the wake of the latest film. Maybe they're just distracted by the relentless snowball of success that is Frozen. We couldn't find any Muppet-themed party supplies in town. The Kid was beginning to look a bit glum. Now that she's turning thirteen, I can see the end of her wanting to have this kind of party at all; I didn't want to let her down.

So we got creative. I started work on handmade party invitations and a Muppet-themed centerpiece; thank goodness it was a short guest list, so we didn't need a huge pile of invitations. We decided to capitalize on the "Rainbow Connection" as a motif and have rainbow colored tableware and treats. (Actually, rainbow stuff is also harder to find than you might expect, unless, perhaps, you live near a gay pride center). I found a case of Muppet Pez dispensers on Amazon and ordered them as the main party favors. Slowly the pieces began to come together. 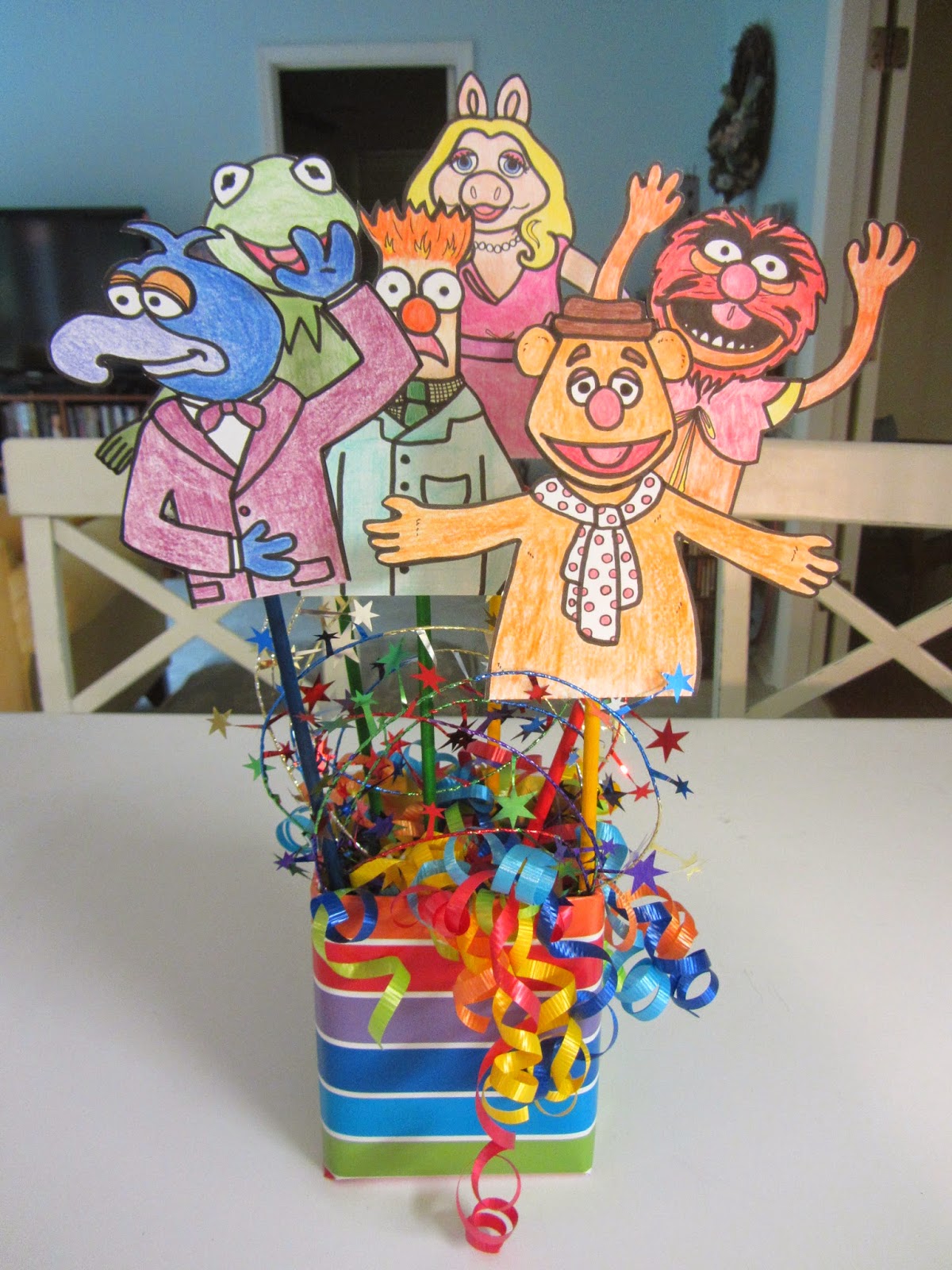 Now, I'm into Muppets, so much so that I have co-edited two essay anthologies about them, so of course I have Muppet stuff lying around my house. Unfortunately, it isn't necessarily the kind of stuff you use for party decorations. I have Christopher Finch's terrific book, Jim Henson: The Works. I have copies of  my own two books, Kermit Culture and The Wider Worlds of Jim Henson. I don't, however, think that the kids would have enjoyed a book display, no matter how informative and engaging the texts. ("Hey, kids, let's listen to Dr. Garlen give a fascinating reading of her essay on high and low aesthetic cultural values as represented by Gonzo the Great!") Luckily, I also have a stuffed Gonzo and a secret stockpile of Muppet stickers, and we put those to work for our cause.

For snacks, we had Piggy pink and Kermit green cupcakes, rainbow Jello, and rainbow sherbet. Rainbow Jello looks super, but it takes forever to make all of those layers, and I had to keep repeating "Roy G Biv" to myself while I made each new level. We also had a colorful tray of veggies and a bowl of rainbow Goldfish crackers, but as you can probably imagine we had a lot of veggies left over at the end. Who knew kids would rather eat cupcakes than raw carrots? 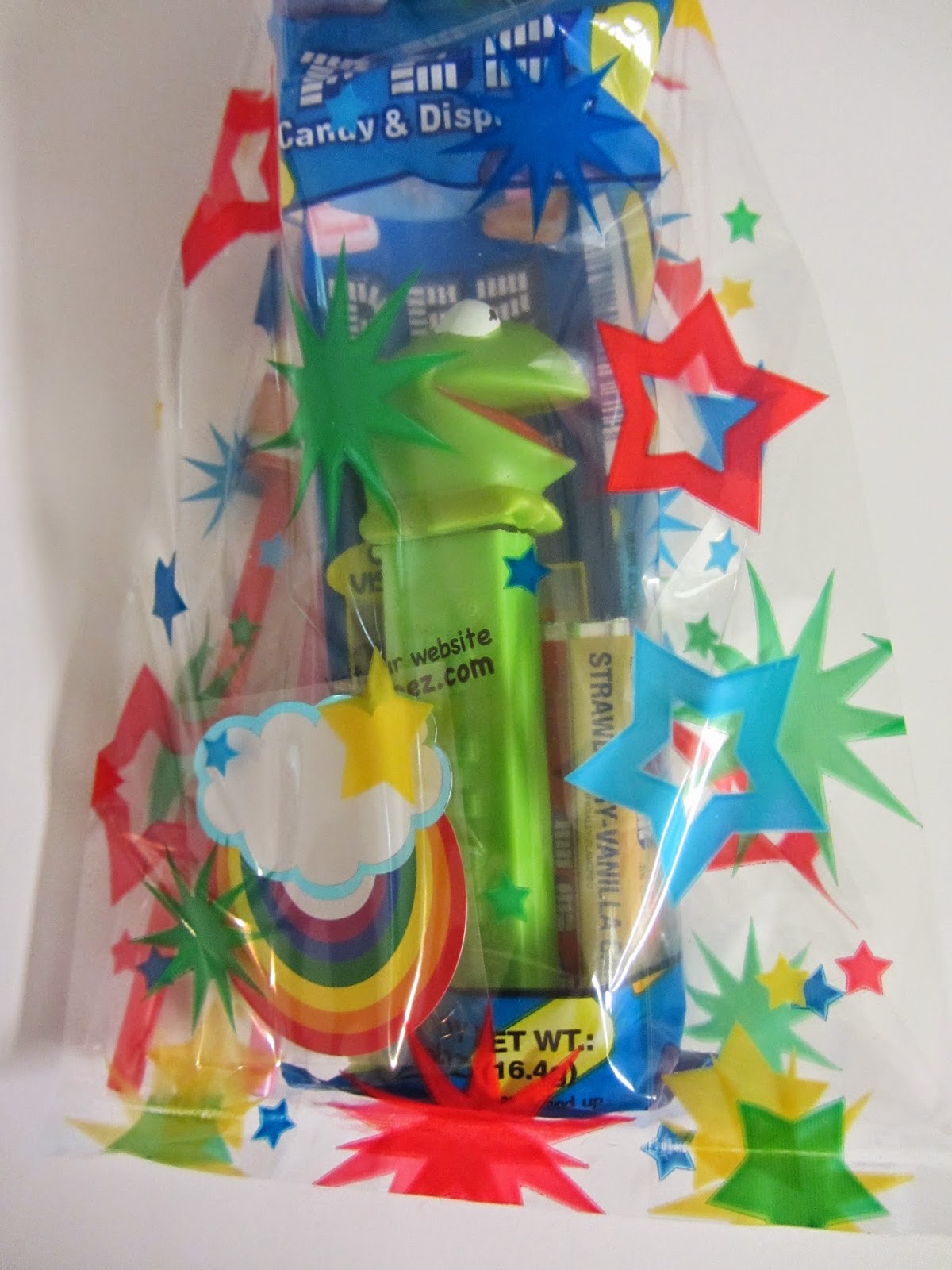 The Kid wanted us to have a Muppet-themed activity, so I made a 20 Questions kind of game where we pinned the names of Muppet characters to the kids' backs and had them ask yes or no questions to figure out which one they had. We had easy, medium, and hard questions, but I might have gotten a teensy bit carried away with the hard ones. Hey, I was sure the Kid and our other junior Muppet fan would get Camilla, Uncle Deadly, Link Hogthrob, and Lew Zealand! It's not like I asked them to guess Bobby Benson's Baby Band or Wayne & Wanda (OK, maybe I did put Marvin Suggs in there. I have a sadistic streak). The kids who didn't know anything about the Muppets - and I'm sad to tell you that such children do exist in the world, poor deprived little urchins that they are - got the softball Muppet standards like Kermit, Miss Piggy, and Animal.

The party was a big success, and we scored a last minute win by finding a giant Kermit balloon at a grocery store in town. Hopefully the Kid will have some memories to cherish. I'll take it as a sign that I'm raising her right if she shares my enthusiasm for Muppets and classic movies. Actually, I guess I ought to be thankful she didn't decide she wanted to have a Gene Kelly or Marx Brothers themed birthday party instead! Seriously, I wouldn't put that past her. 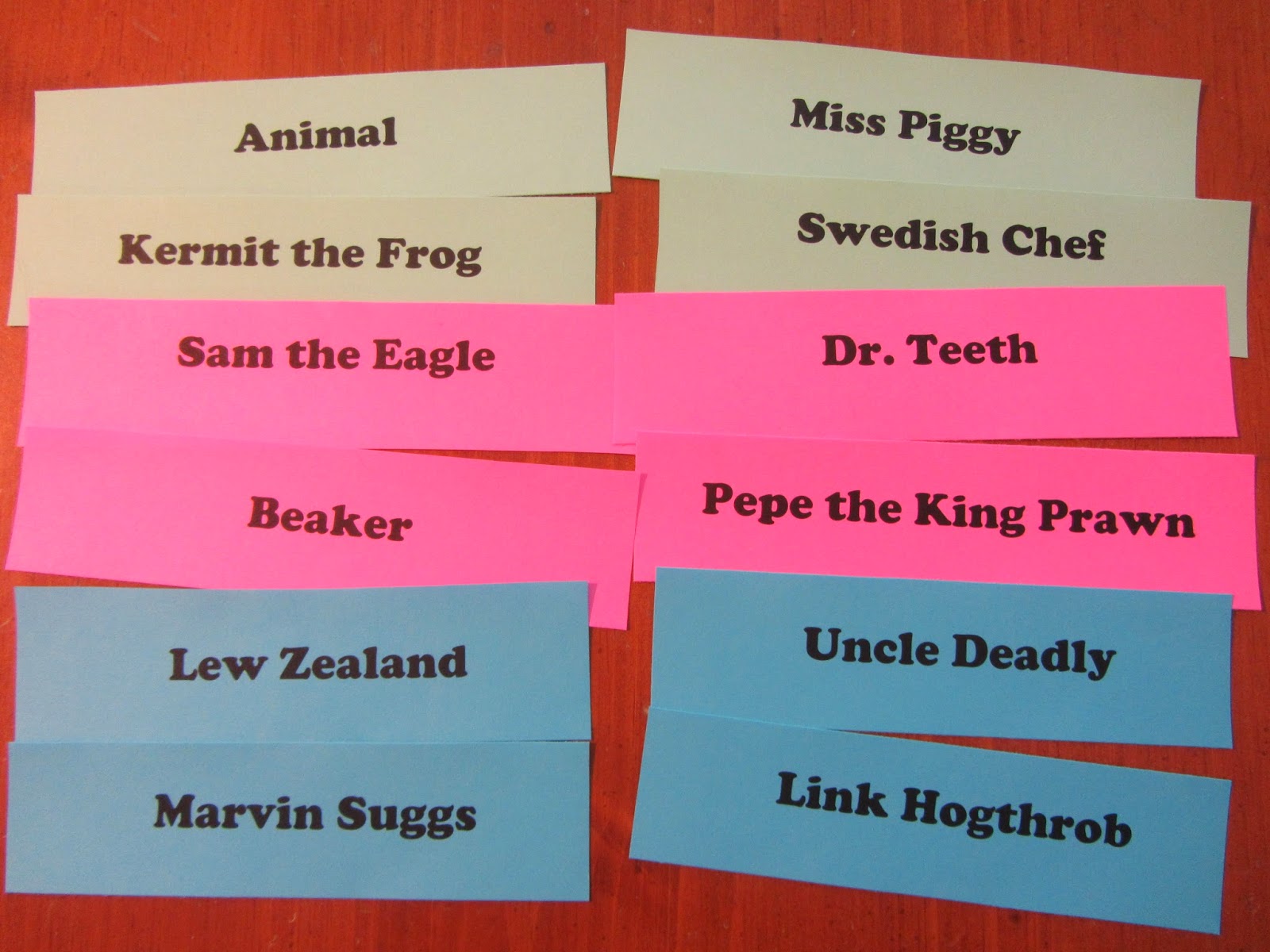 Nobody give her any funny ideas like that for next year!

Posted by Jennifer Garlen at 4:23 PM