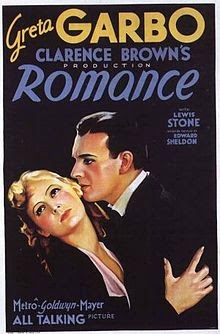 Greta Garbo earned two Oscar nominations for Best Actress in 1930, one for Anna Christie (1930) and the other for Romance (1930). Both talking pictures and the Oscars were still new that year, and the double nomination testifies to the thrill viewers felt on hearing Garbo’s remarkable voice. In Romance, directed by Clarence Brown, Garbo uses that voice and all of her other charms to great effect, although the picture falls short of her best work because of trouble with the story and a weak performance from her leading man. Despite these issues, Romance is worth watching for its luminous star, who revels in the glamor and the tragedy of her character in truly operatic fashion.

Garbo plays European opera diva Rita Cavallini, who arrives in New York as the guest of her much older lover, Cornelius Van Tuyl (Lewis Stone). There she meets Tom Armstrong (Gavin Gordon), a young clergyman who becomes enamored of her and naively believes that they can be married. Van Tuyl encourages Rita to end the relationship in order to spare Tom the inevitable heartbreak of learning the truth about Rita’s past affairs, but Rita finds her own love for Tom too powerful to resist.

Rita is a perfect role for Garbo because it capitalizes on her persona as a foreign enchantress, an angel of the unknown, both gloriously bright and faintly threatening. Radiantly beautiful in her formal evening gown, Rita appears in her first important scene with Tom as a Sleeping Beauty awakened by his arrival in the room, but her pose is all a calculated role. Tom fails to recognize her, and she delights in his ignorance, even telling him that Madame Cavallini is a fat, ugly hunchback. The way she says “horrible” is thrillingly naughty, exaggerated and arch. Throughout the movie she is the flame to which moths and viewers are drawn, so we understand why both Van Tuyl and Tom fall in love with her, but it’s much harder to fathom what she sees in Tom, who comes off as priggish, stiff, and hopelessly out of touch. His prudish morality sounds especially dull coming from Gavin Gordon, who simply lacks any onscreen chemistry with his leading lady. We really believe he’d marry her and then expect her to be content crocheting doilies for the rectory and receiving the occasional chaste peck on the cheek as a mark of his affection.

The frame tale that surrounds the central narrative works very well, with the elderly Tom much more sympathetic and interesting than young Tom ever manages to be. Old Tom, a wiser and a sadder man, tells the story of his brief romance to his grandson, Harry (Elliott Nugent), a headstrong youth who wants to marry an actress against his mother’s wishes. We find out a lot about the aftermath of Tom and Rita’s brief time together in just a few lines of quiet dialogue. Of course Tom settles into a comfortable life with a woman more suited to his expectations and profession, but Rita’s story takes a different turn, surprising perhaps but perfectly in keeping with the grand theatrical nature of her passions. The last time we see her in Tom’s story, she is standing like a saint at the sacrificial stake, her rapt face turned toward God, with the forgotten and now worshipful Tom clinging to the hem of her gown. She seems poised for ascension; what earthly life could hold meaning for her after a moment like that?

Be sure to appreciate the appearance of Clara Blandick, best remembered as Auntie Em in The Wizard of Oz (1939), as Tom’s disapproving aunt. See more of the great Garbo in Grand Hotel (1932), Queen Christina (1933), and Ninotchka (1939). Gavin Gordon went on to play supporting roles in many films, including Mystery of the Wax Museum (1933), The Scarlet Empress (1934), and The Bride of Frankenstein (1935). Lewis Stone played Judge Hardy in the Andy Hardy series, but you’ll also find him in other Garbo films and in Jean Harlow pictures like Red-Headed Woman (1932) and China Seas (1935). Clarence Brown earned an Oscar nomination for Best Director for his work on Romance; although he never won, he picked up five more nominations over the course of his career for films like A Free Soul (1931), National Velvet (1944), and The Yearling (1946).

Posted by Jennifer Garlen at 9:59 AM