Classic Films in Focus: ACROSS THE WIDE MISSOURI (1951) 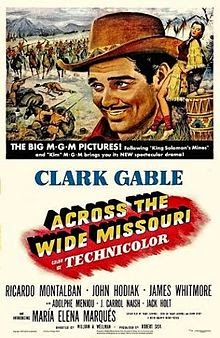 Hollywood churned out Westerns during the 1950s, but only a few of them became true classics on the level of Winchester ‘73 (1950) and The Searchers (1956). The rest, like William Wellman’s Across the Wide Missouri (1951), amused the Saturday matinee crowd well enough, and today they are still decent company for an hour or two, especially for fans of the genre as a whole. Although it’s by no means a great film, Across the Wide Missouri offers just enough entertainment to make it interesting, especially in its fine cast and gorgeous Technicolor scenery. Classic movie fans will appreciate Clark Gable in the lead role, with supporting players like Ricardo Montalban, John Hodiak, Adolphe Menjou, and J. Carrol Naish.

Gable stars as Flint Mitchell, a beaver trapper who takes a pretty native wife (María Elena Marqués) as a business arrangement to open up new territory. Soon enough he finds himself in love with his spirited bride, but their happiness is threatened by the antagonism of the Blackfoot warrior, Ironshirt (Ricardo Montalban).

Yes, indeed, we have Ricardo Montalban as the shirtless Blackfoot antagonist, looking almost as ridiculous in retrospect as Rock Hudson in Winchester ’73. Both of the most important “native” roles in the film are actually played by Mexican actors, with the lovely María Elena Marqués making a charming if ethnically inaccurate Blackfoot heroine. The chiefs are equally inauthentic; J. Carrol Naish plays Looking Glass, and Jack Holt appears as the aging Bear Ghost. Of the lot, the Marqués character, Kamiah, proves the most interesting. Unfortunately, she follows the Pocahontas model of Native American femininity; she’s spunky, eager to throw in with the white man’s cause, and safely controlled by tragedy.

Moments of startling cultural conflation provide some of the film’s best scenes. John Hodiak appears as a Scotsman who has adopted Blackfoot dress and culture, which makes his performance of a traditional Scottish jig quite a sight. Later, a Native American chief appears decked in a suit of medieval armor, buckskins, and a huge feather headdress. Throughout the film, the frontier appears as a place where cultural identities are negotiated and revised, with a diverse group of settlers banding together and sharing aspects of their national tastes and traits with one another. Thus we have characters like the French trapper, Pierre (Adolphe Menjou), joining the mix of Scots, Southerners, and natives who populate the wilderness.

An earlier version of this review originally appeared on Examiner.com. The author retains all rights to this content.
Posted by Jennifer Garlen at 10:38 AM