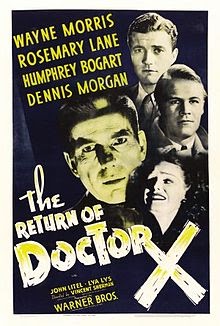 Before The Maltese Falcon (1941) and Casablanca (1942) made him a certified leading man, Humphrey Bogart often played heavies, but The Return of Doctor X (1939) takes him into even stranger territory as a villain who also happens to be one of the undead. This otherwise routine horror programmer directed by Vincent Sherman becomes something unique in the annals of Hollywood history thanks to Bogart’s performance, which shows him more at home in the horror genre than one might suspect. For fans of the iconic star or those interested in the evolution of the movie vampire, The Return of Doctor X merits a viewing, but its thrills mostly depend on the bizarre spectacle of the beloved Bogie in his ghoulishly pallid disguise.

Bogart plays Marshall Quesne, the mysterious assistant of the prominent blood specialist Dr. Flegg (John Litel). When a famous actress (Lya Lys) inexplicably recovers from being murdered, the doctor is consulted about the case by dogged reporter Walt “Wichita” Garrett (Wayne Morris) and junior physician Mike Rhodes (Dennis Morgan). A second murder deepens the plot, and the two young men begin to think that Dr. Flegg and his strange associate know more about the deaths than they’re saying. Their investigation uncovers the incredible truth but also endangers the life of Mike’s new love interest, Joan (Rosemary Lane), a pretty nurse whose blood type matches that of both of the murder victims.

Technically, Bogart’s character is just a supporting role, but his subsequent fame and his intense performance make him the player to watch. Wayne Morris is genial but rather mild as the reporter, especially in comparison to Lee Tracy, who plays the same type of character in the original Doctor X (1932). Although they make credible leads in other pictures, Dennis Morgan and Rosemary Lane just don’t have that much to do as the obligatory romantic pair, and they’re consistently less interesting than the creepy characters. Lya Lys has some effective scenes as the undead Angela Merrova, while John Litel really looks the part of the dangerously obsessed academic in his goatee and monocle, but from the moment he first turns up Bogart really steals the movie. We first see him, with his white-striped hair and deathly pallor, in full mad scientist garb, weirdly accompanied by a white rabbit cradled in the crook of his arm. He looks like the long-lost grandfather of Johnny Depp as Sweeney Todd. In just a few moments on screen Bogart manages to convey both the menace and the pathos of his character, who describes both himself and the rabbit as “victims of circumstance.”

The specific circumstance that dictates Quesne’s fate makes The Return of Doctor X intriguing as a blend of the scientific hubris of Frankenstein and the bloodlust of Dracula. Dr. Flegg uses manipulation of the blood, plus his own invention of a synthetic substitute, to bring the dead back to life; unfortunately, his patients must have a constant supply of new blood to replenish their systems. Although the vampires of this story require transfusions rather than exposed necks, the murder victims end up drained of their blood just the same. While Angela and Quesne both have the pale faces, cold flesh, and strange manner typical of the 1930s screen vampire, their monstrosity is born of science, not the supernatural. Neither of them chooses to become what they are, yet they cling to their unnatural lives with grim determination. Later movies, like Near Dark (1987) and Blade (1998), would further explore the idea of vampirism as a matter of hematology, but in this picture the theme is yoked to the overreaching ambition of a scientist determined to play God. Near the end of the movie, Flegg, the Victor Frankenstein of this narrative, predictably laments, “My experiments have turned into madness. I’ve created a monster.” We understand that his intentions were the very best, but perhaps he ought to have expected this outcome when he chose a crazed scientist executed for child murder as his test subject.

The Return of Doctor X is currently available for streaming on Warner Archive Instant.
Posted by Jennifer Garlen at 11:20 AM