Hollywood is naturally the Mecca of every classic movie fan, but for many of us visiting in person is difficult, if not impossible. I have been reading lucky travelers' blog posts and admiring photos of the Walk of Fame for years, but last week I finally got to check Hollywood off of my own personal bucket list. It was everything I expected it to be: tacky, crowded, worn around the edges, and yet bursting with the spirit of those who made it great. Footprints and stars, glamor and squalor, the absurd and the sublime - all are there among the throngs of tourists and the endless blaring signs.

We made a comfortable camp at the Hollywood Bed & Breakfast just up the street, which allowed us to walk a few blocks into the tourist stretch when we woke early on Sunday morning. Being on Central Time, we were wide awake long before the locals got going, and we mostly saw joggers and dog walkers along the residential section. Even Grauman's Chinese Theatre was quiet when we first passed by. 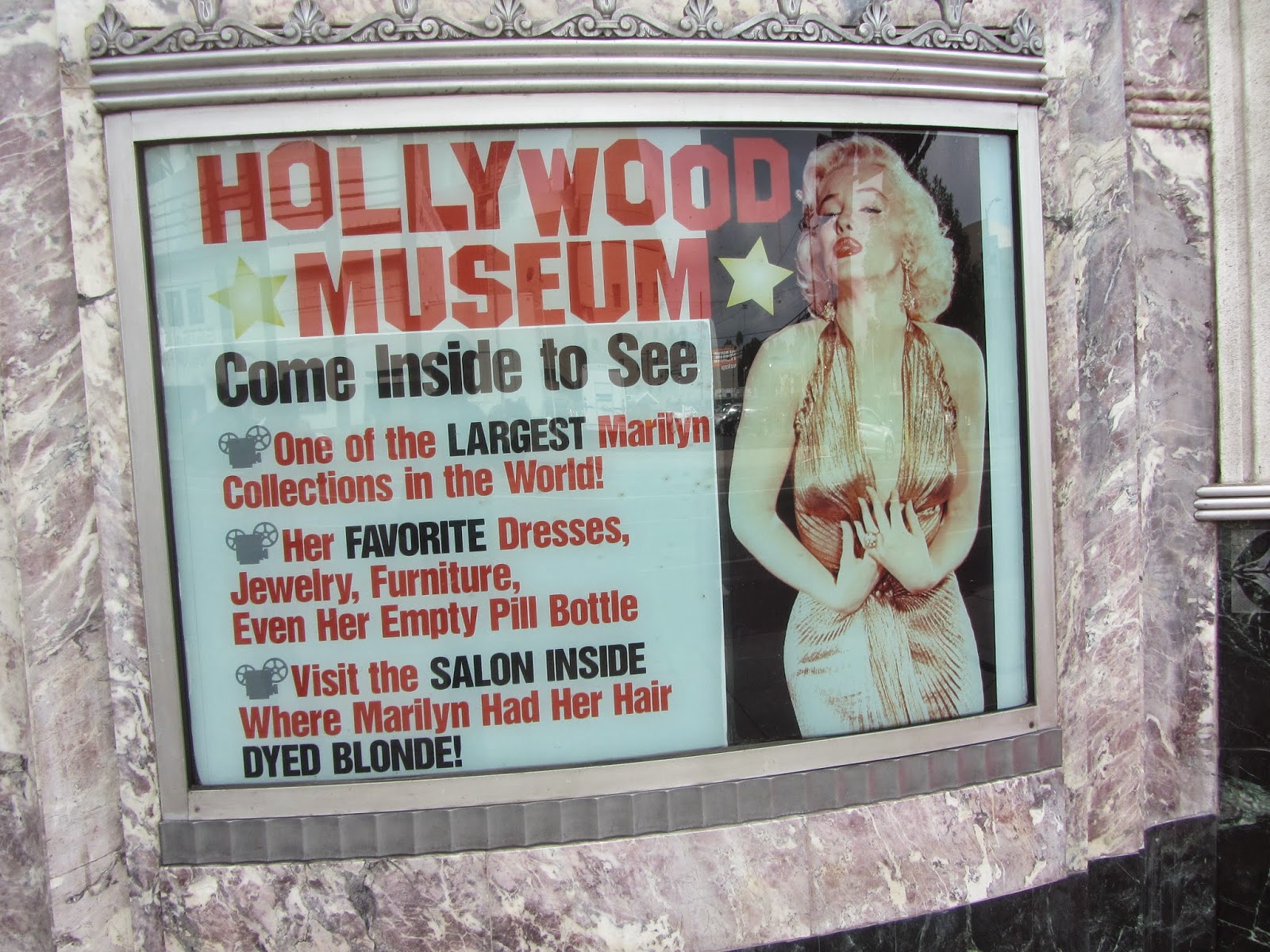 Our first stop of the day was the Hollywood Museum, located in the Max Factor building. In spite of an exterior and barker that make it seem like just another tourist trap, this is a great place for classic movie buffs. The Max Factor angle actually makes for fascinating history, especially if you're interested in Jean Harlow, Lucille Ball, Joan Crawford, and other stars who were known for the distinctive looks that Factor helped to create. Downstairs were mildly gruesome horror exhibits celebrating Boris Karloff, Christopher Lee, Hammer films, and other genre icons. Upstairs we found exhibits featuring Elvira, Sonny and Cher, The Beverly Hillbillies, and just about everything else you can think of. A costume display highlighted outfits from recent movies and television shows. We spent a good two hours in the museum, but you could stay longer if you wanted to watch the entire Max Factor in Hollywood documentary.

Mel's next door to the museum was a touristy bust, very expensive and lacking in the character that made us enjoy Mel's in San Francisco. Even though Mel's offers a discount on Hollywood Museum tickets if you eat there first, I suggest you skip it and find someplace better - or at least less pricey - to eat. Sadly, some of the more iconic Hollywood Blvd. eateries were closed the day we were there. 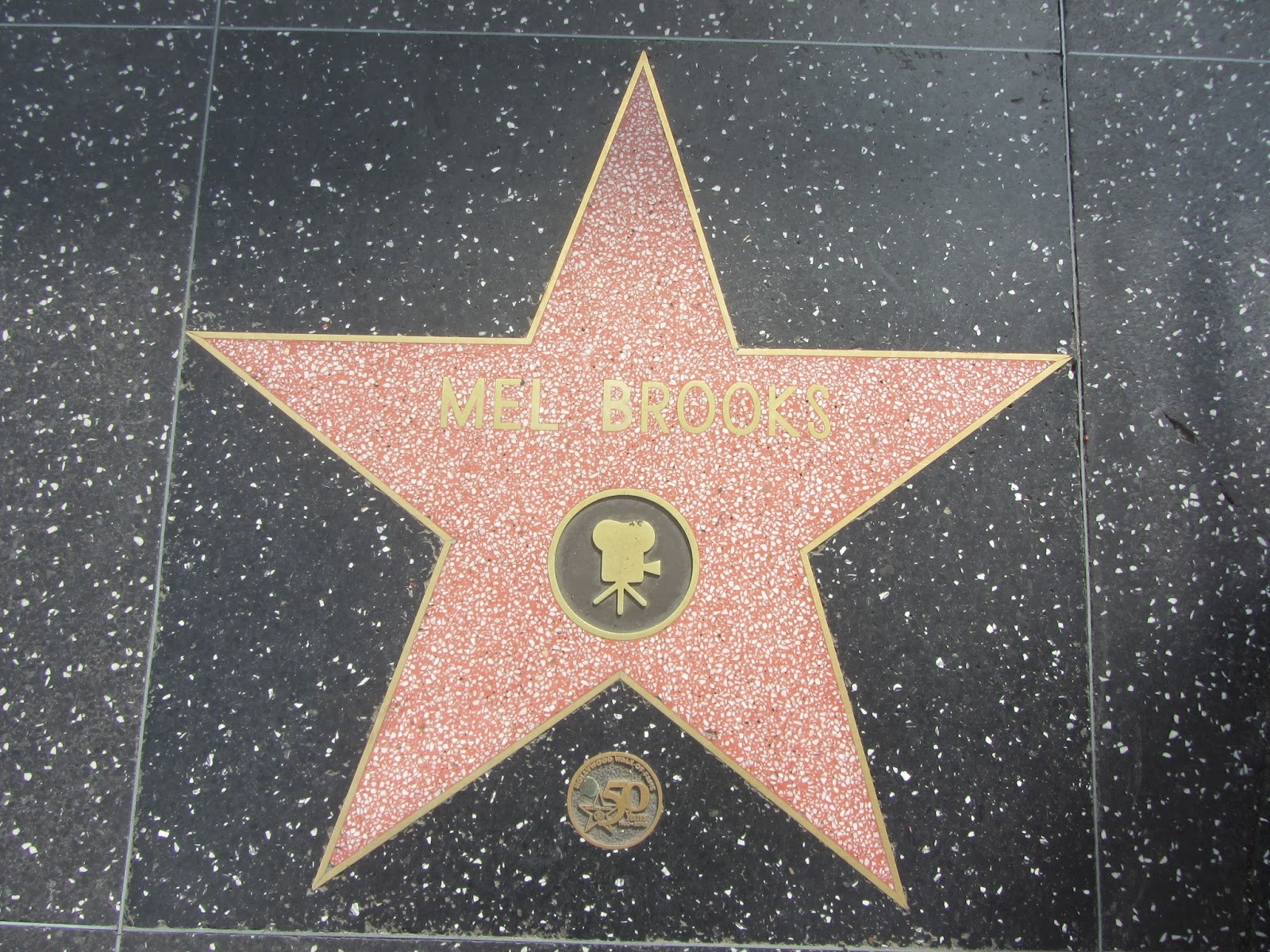 Of course we spent time wandering up and down the Walk of Fame, and I enjoyed reciting the film careers of the stars to my utterly uninterested spouse and child. (They endure similar educational lectures from me on a regular basis.) Some homeless men had constructed a bizarre shrine on Marilyn Monroe's star that consisted mostly of McDonald's fare, including an apple pie still in the box, a handful of chicken nuggets, and some other items that they arranged with great consideration. Oddly enough, none of the homeless people ever asked us for anything, although one man called out "Welcome to Hollywood!" every time we passed him.

By the time we returned to Grauman's to see the cement, the crowds had arrived. Hoards of people jostled one another in front of the theater, but most seemed unimpressed by the stars whose names appeared next to their handprints. It was easy enough to get photos of the blocks honoring Charles Laughton, Margaret O'Brien, and Monty Woolley. 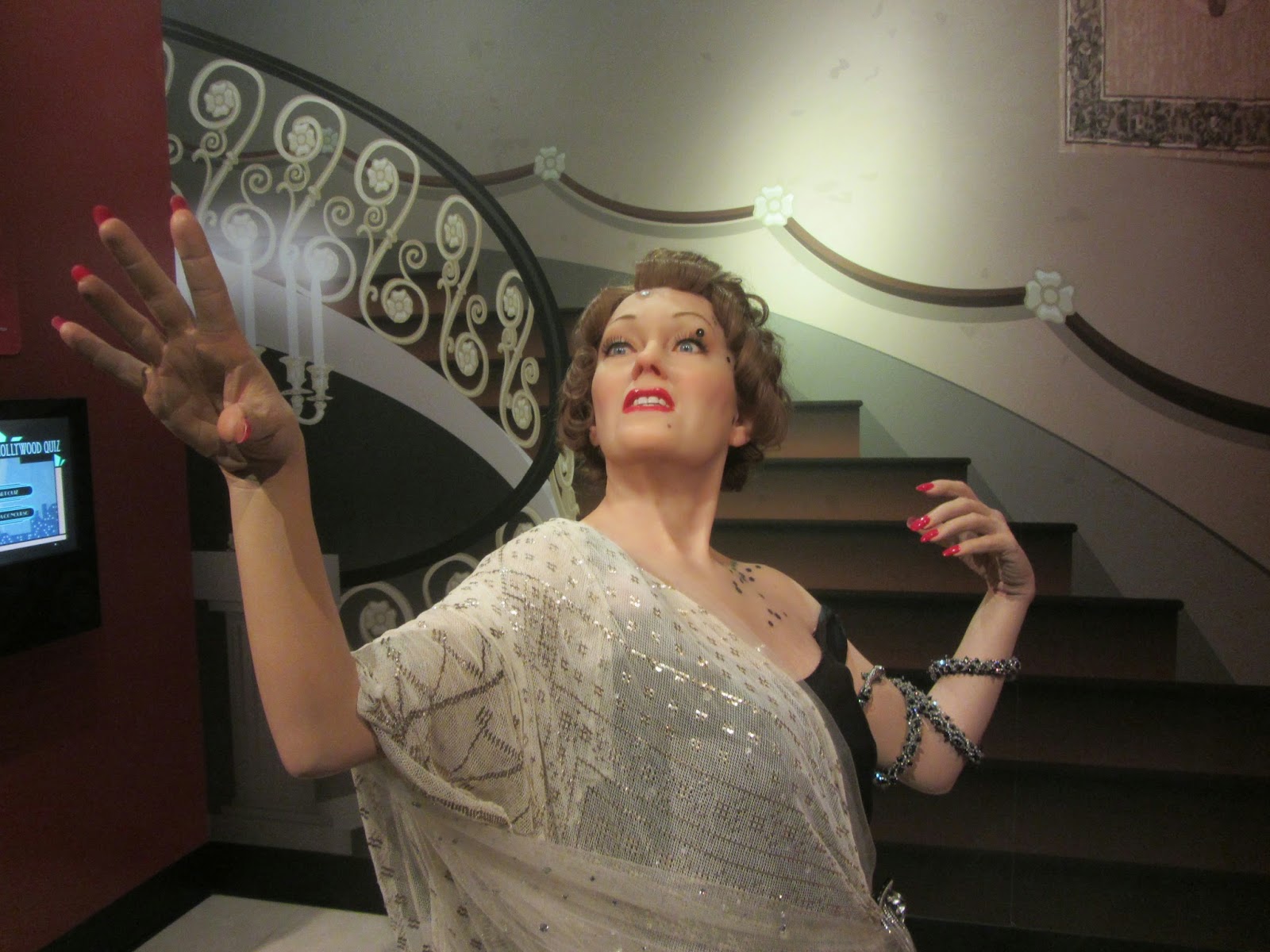 We spent the afternoon at Madame Tussauds Hollywood, which is overpriced and very touristy but also a delight for those who want to have their pictures made with Fred and Ginger, Charlie Chaplin, George Burns, and Bette Davis. The number of classic stars represented was really pretty impressive; I think my favorite was Gloria Swanson as Norma Desmond in Sunset Blvd., but I was also thrilled to find Katharine Hepburn and Humphrey Bogart in The African Queen. The wax figures are more fun because the museum encourages visitors to get close and take interesting pictures; props are even provided for some scenes.

The shopping center near Grauman's has little for the cinephile, although there are some eateries and a number of familiar mall staples. I found the real deal, though, at Larry Edmunds Bookshop, where I browsed movie books, stills, and posters to my heart's content. I would probably still be there a week later if my family hadn't dragged me out.

The highlight of our day in Hollywood was seeing Muppets Most Wanted at Disney's El Capitan Theatre. An organist played a Wurlitzer as the seats filled, making his way through an astonishing number of Disney tunes (he seemed to like Mary Poppins in particular). When he played the theme for The Muppet Show the audience went wild. Then, to our utter delight, we enjoyed a live performance by Kermit the Frog and Miss Piggy. It must have been fifteen or twenty minutes long, and the duo made their way through several songs and gags. The experience became positively uncanny when the movie started outside the very theater where we were sitting! Having co-edited two books about Jim Henson and the Muppets, you could definitely say I'm a fan, and seeing the newest Muppet movie in this setting was almost a religious experience. Afterward, we got to stroll through a display of props and costumes from the picture, including several of Miss Piggy's gowns and the tiny car driven by Ty Burrell. 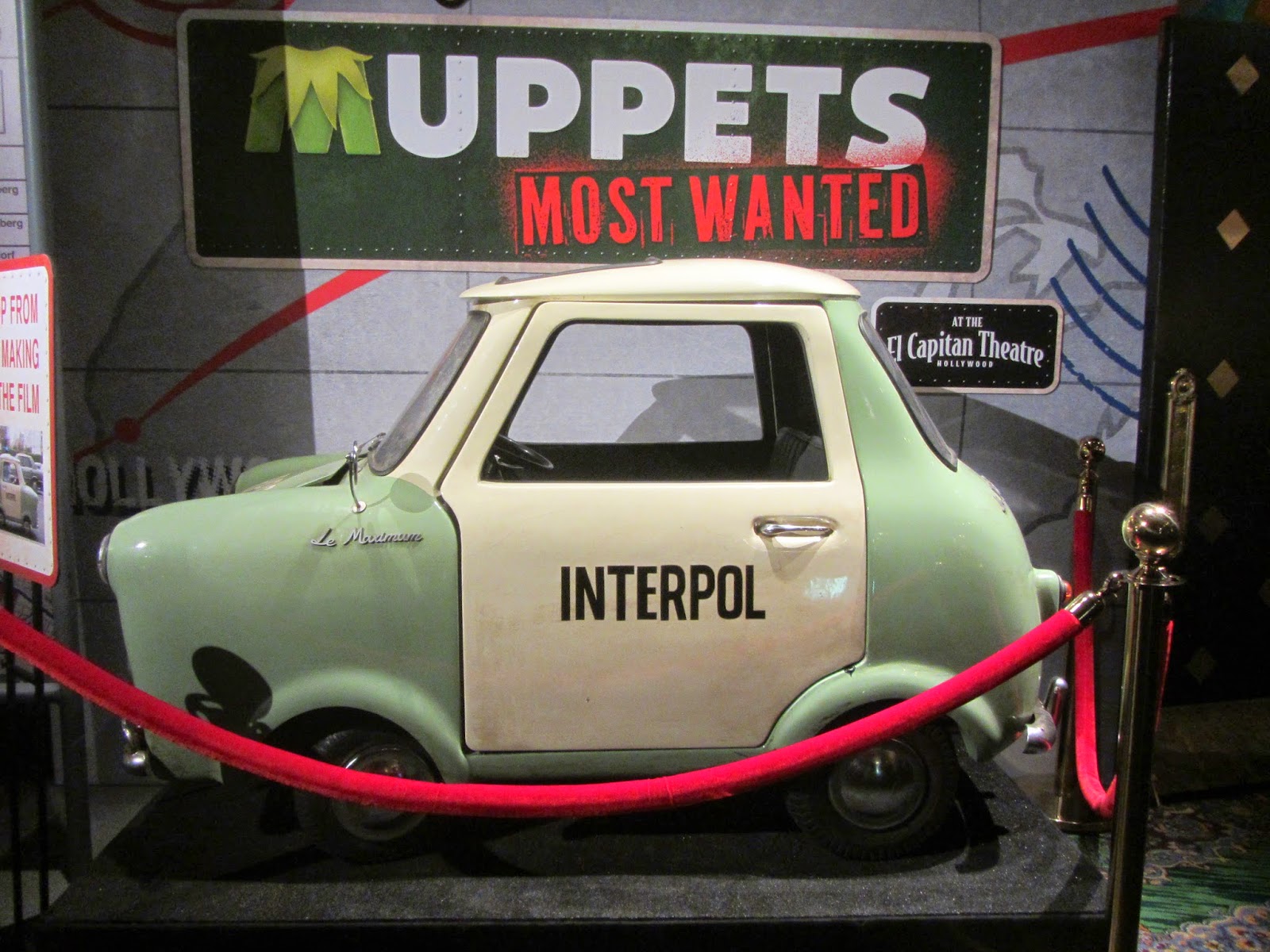 Exhausted and giddy, we caught a bus back to the Hollywood B&B, where we collapsed into Muppet and movie filled dreams. My day in Hollywood was over, but the memories will stay with me for a very long time.
Posted by Jennifer Garlen at 9:18 PM