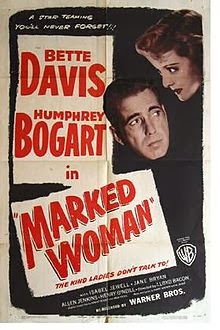 The world of the gangster movie is largely a boys' club, where women exist only as victims or commodities and the mobsters' guns serve as constant reminders of their phallic power. In opposition to that trend we have director Lloyd Bacon's very effective Marked Woman (1937), which features Bette Davis as the leader of a group of women who fight back against the mob's control over their lives. Inspired by the real-life fall of mobster Lucky Luciano in 1936, Marked Woman is a film that took a lot of finesse to get by the censors, but it's an excellent example of a classic Warner Bros. gangster picture that also offers something different from the studio's better-known films.

Davis stars as Mary Dwight, one of five "hostesses" at a night club newly acquired by Johnny Vanning (Eduardo Ciannelli), a vicious crime lord. At first, Mary and her friends agree to play by Vanning's rules, and Mary even helps the mobster beat a murder charge prosecuted by a crusading assistant district attorney named David Graham (Humphrey Bogart). Later, Vanning murders Mary's innocent kid sister, Betty (Jane Bryan), and the devastated Mary leads the women in a dangerous bid to help Graham bring Vanning to justice for his crimes.

Of course the women are prostitutes. The movie calls them "hostesses" to placate the censors, but there's little doubt about their real occupation at the club. When Vanning first takes over, his speech to the assembled girls pointedly includes directions to soften up the suckers for the gambling tables by any means necessary, and later scenes show them cozying up to various men according to the management's orders. The seedy nature of their work contrasts with their beautiful clothes and attractive faces, but they are all tough survivors underneath, pragmatic and jaded enough to cover up Vanning's crimes and keep their mouths shut. The actresses who play the women are all very good at projecting those facets of their characters' personalities. Davis is the undisputed star, but Isabel Jewell is very good as the soiled Southern belle, Emmy Lou, and Lola Lane, Mayo Methot, and Rosalind Marquis all give solid performances, as well. In the most powerful scene in the film, the gangsters beat and mutilate Davis' Mary behind closed doors while the other girls (and the audience) shudder in horror at the sounds of screams and blows. When the door opens, we see only the girls' white-faced reaction shots as clues to the carnage inside. Davis proves her talent for dramatic transformation when she later appears bandaged and beaten in a hospital bed, the wrecked visage and copious gauze a result of her own decision to make the scene more realistic than Bacon and the make-up department had intended.

Bogart's role is comparatively small, although the film marks a reunion with Davis following their appearance together in The Petrified Forest in 1936. At least the part of David Graham put him on the other side of the law for a change. More importantly for Bogart, the film introduced him to Mayo Methot, whom he married in 1938, although the union would prove to be a train wreck that ended with divorce in 1945. Eduardo Ciannelli has a meatier part as the gangster boss, and he makes a truly horrifying villain. Jane Bryan is fresh-faced and sweet as Davis' kid sister, a perfect contrast to the streetwise group who avenge her tragic death.

An earlier version of this review originally appeared on Examiner.com. The author retains all rights to this content.
Posted by Jennifer Garlen at 11:29 AM