Classic Films in Focus: THE HOUND OF THE BASKERVILLES (1959) 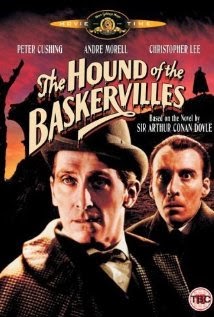 Like other Hammer adaptations of literary classics, director Terence Fisher’s 1959 version of The Hound of the Baskervilles takes many liberties with its source material but strives to retain the essence of the original’s appeal. Making the best-known and most adapted of the Sherlock Holmes mysteries was a natural step for the studio, which boasted not one but two stars who could credibly play the iconic detective. In this outing, Peter Cushing gets the plum role, while Christopher Lee takes on the part of his client, the heir to an estate that is plagued by a deadly legacy. Purists might squirm at the picture’s many deviations from Sir Arthur Conan Doyle’s story, but Hammer fans will find a lot to love in the performances of its legendary stars.

In this adventure, Holmes (Peter Cushing) and Watson (Andre Morell) accept an engagement as the bodyguards of Sir Henry Baskerville (Christopher Lee), who has just inherited the Baskerville estate after the mysterious death of the previous owner. While Watson keeps an eye on Sir Henry, Holmes scours the countryside for clues about the spectral hound who supposedly brings doom to the Baskervilles. Sir Henry becomes interested in Cecile (Marla Landi), the daughter of his neighbor, Stapleton (Ewen Solon), but danger dogs the Baskerville heir at every step.

Cushing makes a very compelling Holmes, so much so that he would play the part again in a 1968 television series and a 1984 TV movie. Like Van Helsing and Victor Frankenstein, Holmes is a character perfectly suited to the fierce intelligence displayed in Cushing’s elegant carriage, expressive face, and precise speech. Christopher Lee would get his own chance to play the sleuth in Sherlock Holmes and the Deadly Necklace (1962) and two TV movies in 1991 and 1992, but since there can only be one Holmes at a time Lee has to make the most of his role as Sir Henry, which gives him the unusual opportunity to be a romantic lead in his scenes with the smoldering Marla Landi. Neither Cushing nor Lee could play the part of Watson, that exemplar of hearty British normalcy, but Andre Morell fills the role very nicely. Holmes’ cold brilliance requires Watson’s merely human counterpoint, but Morell never makes a buffoon of his Watson, which is a great relief to those bothered by less flattering depictions of the detective’s stalwart companion.

Although The Hound of the Baskervilles is not really a horror movie, Hammer milks the gruesome backstory for all the lurid material it can offer. The lengthy opening sequence delays our introduction to the main players but revels in the history of the sadistic Sir Hugo (David Oxley), whose sins supposedly bring about the curse of the monstrous hound. Kidnapping, torture, rape, and murder are the themes of the introduction, making the events that follow seem quite tame by comparison. For all its delight in shocking the viewer up front, the movie remains oddly coy about showing the hound itself, but the budget and effects available at the time produce a rather unexciting beast, so that might be for the best. The human monsters are far more interesting, and each of them gets an opportunity to be perfectly awful, with the requisite poetic justice not far behind.

Terence Fisher also directed Cushing and Lee in The Curse of Frankenstein (1957), Horror of Dracula (1958), and The Mummy (1959). You’ll find Christopher Lee playing Sherlock’s brother, Mycroft, in The Private Life of Sherlock Holmes (1970). Look for Andre Morell in Stage Fright (1950), The Bridge on the River Kwai (1957), and Ben-Hur (1959); although not as famous as his two costars, he had quite an impressive career in both television and film. For the sake of comparison, try other classic Sherlock Holmes movies like The Hound of the Baskervilles (1939), The Adventures of Sherlock Holmes (1939), A Study in Terror (1965), and Murder by Decree (1979). You could really spend the rest of your life watching Holmes adaptations and pastiches; along with Count Dracula, he is one of the most frequently depicted fictional characters of all time.
Posted by Jennifer Garlen at 3:52 PM