Classic Films in Focus: LADIES THEY TALK ABOUT (1933) 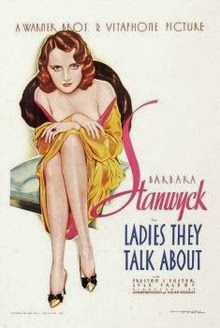 Barbara Stanwyck is always exciting to watch, especially in Pre-Code pictures that let her characters straddle a fascinating line between good and bad. Baby Face (1933) is the best known of her films from this era, but Ladies They Talk About (1933) also merits admiration, especially because Stanwyck gives such a great performance as its anti-heroine, a jaded crook who nonetheless wins the love of a straight arrow crusader against crime. Most of the movie takes place inside a women's prison, which gives Ladies They Talk About plenty of ladies who warrant some discussion, as well as lots of opportunities to revel in the freedoms of Pre-Code film production. Like its iconic star, Ladies They Talk About is smart, sexy, and as tough as they come.

Stanwyck stars as Nan Taylor, a career criminal and the lone female member of a gang of bank robbers. When a sharp-eyed detective recognizes Nan at the scene of the robbery, she ends up going to jail, but she also attracts the attention of David Slade (Preston Foster), an energetic young reformer from her old hometown. Nan confesses her role in the robbery to Slade, who then retracts his offer to help her avoid prison, even though he really cares about her. In the women's section of San Quentin, Nan refuses to see Slade and becomes embroiled in her gang's jailbreak attempt, but her feelings for the handsome Slade are far more complicated than she realizes.

This is Stanwyck's picture from start to finish, and she never disappoints. Her Nan is one cool customer, even on her first day in prison. A less self-assured woman might be daunted by the cries of "New fish!" that go up when Nan enters the common rooms, but she promptly shows her mettle and puts down Susie (Dorothy Burgess), the rival whose jealous obsession with Slade makes her Nan's inveterate enemy. Only Slade has the ability to rock Nan's boat; she melts enough to confess to him early on, but his moralistic reaction strikes her as an unforgivable betrayal. She angrily tears up his letters and then plots revenge against him, but her attraction to him reveals her own better nature, even when she herself refuses to acknowledge it.

The other players merely support Stanwyck's performance, but they do so capably, especially Lillian Roth as Nan's scrappy friend, Linda, and the wonderful Ruth Donnelly as a kind-hearted prison matron. Preston Foster has the clean features and erect posture expected of a religious reformer, but he never seems too stuffy to be likable. Dorothy Burgess plays Susie with a compelling mixture of malice and madness without upstaging the star, although Maude Eburne does engage in some scene stealing as the earthy old madam, Aunt Maggie. In fact, the women of San Quentin make up quite a colorful lot, including the murderous Mrs. Arlington (Cecil Cunningham) and the feisty Mustard (Madame Sul-Te-Wan).

Be sure to appreciate the posh amenities of the prison, including the women's numerous pets and the cell walls decorated with movie stars' pictures. For more classic women's prison movies, try Caged (1950) and I Want to Live! (1958). Barbara Stanwyck's other Pre-Code films include Illicit (1931), Night Nurse (1931), and The Purchase Price (1932). You'll find Preston Foster in Doctor X (1932), I am a Fugitive from a Chain Gang (1932), and The Last Days of Pompeii (1935). Howard Bretherton and William Keighley, who directed Ladies They Talk About, also collaborated on The Match King (1932).

Ladies They Talk About is currently available from streaming on Warner Instant Archive.
Posted by Jennifer Garlen at 5:48 PM