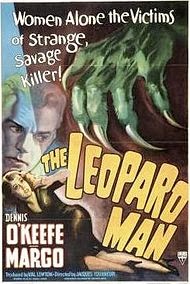 The Leopard Man (1943) provides another example of the collaborative efforts of RKO producer Val Lewton and director Jacques Tourneur, a pair best known for their work on the iconic horror classic, Cat People (1942). Although this movie returns us to feline territory, the story takes a more practical view of horror, with suggestions of the supernatural limited to the dark fate predicted by a fortune teller's cards. The Leopard Man is strictly a low-budget production, with few familiar stars in sight, but like most of Lewton's pictures it shows what a talented filmmaker can do with a lot of imagination and a very small amount of cash. It's not the first Lewton film a newcomer should see - that would be Cat People or I Walked with a Zombie (1943), also directed by Tourneur - but it's a worthwhile addition to the horror canon, and at only 66 minutes long it doesn't take much time to experience.

Dennis O'Keefe stars as Jerry, the manager and boyfriend of an attractive singer named Kiki (Jean Brooks). Jerry and Kiki are playing a gig in New Mexico when he decides to generate publicity by renting a showman's leopard for Kiki to use as a prop, but the leopard promptly escapes. Soon young women are turning up dead all over town; the leopard is the obvious suspect, but Jerry realizes that something more sinister might be taking place.

Suspense and atmosphere are the key elements in this picture, which depends on the creation of a certain mood much more than it relies on the actual leopard or the killer who impersonates him. We see very little of either predator during the movie's most riveting scenes, when the young women meet their violent ends. The most famous is the first death scene, in which a frightened girl finds herself locked out of her house as something terrible closes in. Her skeptical mother, safely on the inside, mocks her until the girl's screams become too horrific to ignore. By then it is too late, and we see the dark pool of the girl's blood ooze beneath the door. The next girl meets an equally gory death in a walled cemetery, while a third, more brazen than her fellow victims, tries to laugh at the death card the fortune teller repeatedly draws for her. These moments make the most effective use of pacing, shadow, and sound, especially as Clo-Clo (Margo), the third young woman, plays a constant rhythm on her castanets wherever she goes.

Other Lewton films rely on the star power of actors like Simone Simon, Boris Karloff, Frances Dee, or Anna Lee, but The Leopard Man lacks a really fascinating central character. Dennis O'Keefe and Jean Brooks have no air of mystery about them; they're just two all-American folks hoping to assuage their guilt by finding the leopard and the opportunistic killer. The first two victims are lovely but not especially interesting girls, and they have too little screen time for us to become really invested in them. More compelling are Clo-Clo and her fortune teller friend, Maria, played by the very capable Isabel Jewell; they get quite a bit of development, and Clo-Clo's feisty, sweet and salty personality makes her the most engaging female character in the movie. While it would spoil the movie's ending to say too much about the killer, this is definitely not a story that makes a protagonist out of the heavy, which might be a bit of a letdown given the title and the implied possibilities for psychological aberration.

The Leopard Man is currently available for streaming on Warner Archive Instant.
Posted by Jennifer Garlen at 2:07 PM