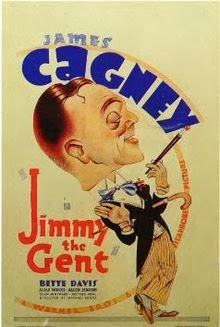 James Cagney and Bette Davis only made two pictures together, the first of which was Jimmy the Gent (1934), and the second The Bride Came C.O.D. (1941). The pairing of these two huge personalities might seem like a match made in heaven, but neither of their collaborations is as good as their individual films, perhaps because both put Bette Davis into uncertain territory as a comedic heroine. In Jimmy the Gent, Michael Curtiz directs the two stars through a rocky romance that plays like a tamer version of a typical Pre-Code comedy, which makes sense given the movie’s release date in 1934, just as the Hays Code really started to be enforced. There are laughs to be found in Jimmy the Gent, thanks to Cagney and the daffy charms of Alice White, but the picture will mostly appeal to those who have a vested interest in the careers of the two iconic leads.

Cagney plays Jimmy Corrigan, who specializes in providing imaginary heirs for the fortunes of dead millionaires, with a generous cut for himself as the reward. Bette Davis bristles as the more ethical Joan Martin, who used to work for Jimmy but jumped ship to his upscale rival, Wallingham (Alan Dinehart). As Jimmy makes an effort to polish his act, he and Wallingham end up supporting rival heirs to an old lady’s fortune, but Jimmy’s real plan is to win back Joan by exposing Wallingham as a cheat and a heel.

With his shaved head topped with a cockscomb of wavy hair, Cagney has the feisty demeanor of a barnyard rooster, strutting and crowing in an office full of attractive hens. He plays up the comedic aspects of his character, who talks like a gangster but is really a much milder kind of crook, and his most violent acts involve throwing things at his sidekick, Louie (Allen Jenkins). Jimmy yearns for class and the appearance of respectability, but he doesn’t fully comprehend either. In fact, Jimmy is crooked to the core; even his show of “ethics” to win back Joan is merely that. Cagney invests the character with such energy and humor that we want to like him in spite of his amoral behavior, but some of his dealings are so shady that it’s hard to forgive him, especially when Jimmy plans ahead of time to cheat Gladys Farrell (Mayo Methot) out of her cut of the money that he promises to give her.

Bette Davis ends up being another problem with our final sense of the picture. A different leading lady, perhaps Jean Harlow or Joan Blondell, might have made Jimmy the Gent a real corker of a comedy, but Bette Davis plays it perfectly straight, and her performance creates a jarring sense of dual genres. The shift is especially noticeable in her scenes with Alan Dinehart, when his smirks and double takes contrast with her melodramatic delivery of her lines. The movie also saddles Davis with an odd hairstyle and camera angles that don’t necessarily flatter her face, but this is still early in her career, before she was a big enough star to have a say in such matters. Her breakout role would come later the same year, when her dramatic talents were put to much better use in Of Human Bondage (1934). I would never say that Bette Davis was bad in anything, but Jimmy the Gent is by no means the best place to see her, and her performance suggests that she knows this isn't her kind of movie or the sort of character she was meant to play.

Jimmy the Gent is currently available for streaming on Warner Archive Instant.

Posted by Jennifer Garlen at 7:54 PM