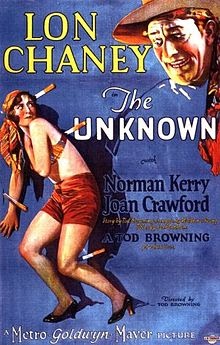 Lon Chaney’s talent for physical transformation takes a different form in this silent horror film from Tod Browning, the director best remembered today for Dracula (1931) and Freaks (1932). Like Freaks, this earlier Browning production also unfolds in a circus, with Chaney as one of the sideshow acts, and it presages the later movie’s themes of altered bodies, unrequited love, and terrible revenge. As the movie’s murderous protagonist, Chaney gives an intense, powerful performance that silent horror fans are certain to appreciate, but Joan Crawford also provides part of the appeal as the object of Chaney’s deranged devotion.

Chaney stars as Alonzo, an armless performer in a gypsy circus. His inability to touch her attracts the friendship of the beautiful Nanon (Joan Crawford), who harbors a phobia of men’s hands. Alonzo, however, has a dangerous secret; he does have arms, which he keeps hidden because a deformity of his fingers marks him as a wanted criminal. Alonzo pretends to encourage his handsome rival, Malabar (Norman Kerry), to pursue Nanon, but secretly he plots to win her for himself, even if keeping her love means making a monstrous sacrifice.

Many of Chaney’s most famous characters depend on makeup and appliances to alter his face, but as Alonzo he looks more or less like himself, if outfitted in picturesque gypsy garb. We actually get to see the way in which his arms are bound when Alonzo gets undressed at night, and it looks absolutely excruciating, but the real fascination lies in Alonzo’s expressions, which Chaney brilliantly invests with love, hatred, rage, and grim resolve. We understand that Alonzo is both evil and insane, but we also see that he worships Nanon with a passion even more violent than his darker urges. He will go to any lengths to possess her, and we have to pity him for that devotion, much as we pity all of the great, doomed monsters of classic horror.

As Nanon, Crawford amply justifies Alonzo’s ardor, although she’s so young that you might not recognize her at first glance. With her large eyes and Cupid’s bow mouth, the youthful Crawford has a softness about her that we don’t normally associate with her image. We do, however, see flashes of the woman she would become later in her film career; when Nanon is frightened, angry, or repulsed, the angles of her face take on their familiar shape, the hard lines revealing that steely, indomitable force. She has her best scenes early on, when she recoils from the amorous Malabar’s embraces; later, once she gets over her fear and accepts him as a lover, she functions mostly as Alonzo’s unwitting tormentor, smiling at her distraught admirer while the hated rival triumphantly takes her in his arms. We can hardly blame Alonzo for plotting an accident that will tear the offensive appendages right off of Malabar’s muscular torso.

Browning and Chaney both revel in a perverse sense of irony that builds to a crescendo around the halfway point and then spills over into the conclusion, but the climax really comes with Alonzo’s realization, too late, that he has made his sacrifice in vain. It’s an extreme but effective reminder not to count one’s chickens before they hatch, and the scene delights in showing us the happy couple’s caresses contrasted with Alonzo’s increasing hysteria in reply. They don’t know why he laughs, and cries, and faints, but we do, and the result is brilliantly awful, the kind of moment that makes a viewer squirm with an unbearably delicious sense of agony and dread. It is precisely the kind of sublime horror that the best of the silent films excel at evoking.

Alloy Orchestra provides musical accompaniment on the Warner Archive version of the film, which enhances the mood without being intrusive. For more Chaney and Browning collaborations, see West of Zanzibar (1928) and Where East is East (1929). You can see Chaney in his most iconic roles in The Hunchback of Notre Dame (1923) and The Phantom of the Opera (1925); Norman Kerry appears in both of those films, as well. For more of Joan Crawford's early screen work, see West Point (1927) and Our Dancing Daughters (1928).

The Unknown is currently available for streaming on Warner Archive Instant, along with the 1928 Chaney picture, Laugh, Clown, Laugh.
Posted by Jennifer Garlen at 9:22 AM