Classic Films in Focus: THE BEAUTIFUL BLONDE FROM BASHFUL BEND (1949) 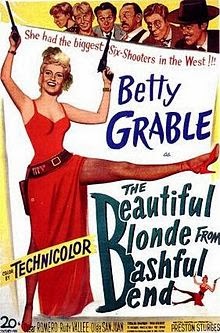 If you know much about writer and director Preston Sturges, you might well go into The Beautiful Blonde from Bashful Bend (1949) expecting too much. Sturges, after all, was the brilliant creative force behind smartly daring comedies like The Lady Eve (1941), Sullivan’s Travels (1941), and The Miracle of Morgan’s Creek (1944), but this Western musical comedy starring Betty Grable lacks the punch of those classic films. Despite that, The Beautiful Blonde from Bashful Bend is still amusing enough to be worth watching, especially because of a sprightly supporting cast and several instances of Sturges’ typically outrageous humor.

The story follows Freddie Jones (Grable), a feisty singer in a frontier saloon who gets into trouble when she accidentally shoots a judge in the rear end while aiming for her faithless lover, Blackie (Cesar Romero). Freddie and her pal, Conchita (Olga San Juan), hightail it out of Bashful Bend and impersonate a schoolteacher and her Native American maid in another town further down the railroad line, where Freddie entertains the advances of a wealthy local (Rudy Vallee). Trouble pursues the girls when Blackie discovers their hiding place and the resulting shenanigans cause a shootout in the town.

Grable is fetching as the trigger happy heroine, and her musical number early in the picture is fun, especially as her backup singers react to her plans to finish the song with a bang. Cesar Romero projects his customary charm as her roving paramour, and Rudy Vallee is reliably cast as the fussy golden boy. The romantic relationship between Freddie and Blackie sadly lacks development, and the joke about the judge’s posterior gets old by the end of the picture, but Sturges’ usual crew of character actors liven things up, and Sterling Holloway is hilariously weird as a crazy local youth. There’s also a great cameo appearance by Margaret Hamilton early in the movie. Upstaging all of these comedians is the simply delightful Olga San Juan as Freddie’s Mexican friend, Conchita. Whatever the other failings of the picture might be, her knowing, naughty performance makes the whole thing worthwhile.

Be sure to catch the strains of the old murder ballad, “Frankie and Johnny,” in the score whenever Freddie and Blackie get together. Look for more of Betty Grable in Down Argentine Way (1940), I Wake Up Screaming (1941), and How to Marry a Millionaire (1953). Best remembered today for his role as the Joker on the 1960s Batman series, Cesar Romero can also be found in Wee Willie Winkie (1937), Orchestra Wives (1942), and Vera Cruz (1954). Rudy Vallee plays similar characters in The Palm Beach Story (1942) and The Bachelor and the Bobby-Soxer (1947). Olga San Juan never became a star, but you can find her in a couple of comedies, including Blue Skies (1946), Variety Girl (1947), and One Touch of Venus (1948). Finally, ask the kids if they recognize the distinctive tones of that maniacal redheaded fellow; Sterling Holloway provided the voice for several memorable Disney characters, including the Cheshire Cat and Winnie the Pooh.

An earlier version of this review originally appeared on Examiner.com. The author retains all rights to this content.
Posted by Jennifer Garlen at 10:49 AM