Classic Films in Focus: THE UNSUSPECTED (1947) 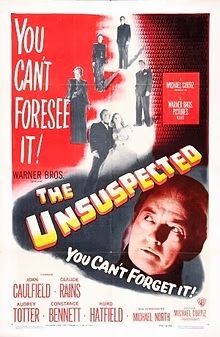 Michael Curtiz’s 1947 thriller, The Unsuspected, puts Claude Rains back into the kind of role he had already played with great success in films like Casablanca (1942) and Notorious (1946), so it’s no surprise that he’s equally compelling as Victor Grandison, the suave but manipulative radio host who is really this picture’s protagonist. Fans of the incomparable Rains will enjoy The Unsuspected because it focuses on his character and gives him a series of excellent scenes in which to work out Grandison’s various moods, although the romantic leads aren’t able to hold the screen against their more interesting costar. Despite a few weak spots that hold it back from true greatness, The Unsuspected is certainly worth watching if you like Claude Rains, and it also offers some memorable performances from Audrey Totter, Hurd Hatfield, and Constant Bennett.

Rains dominates the movie as the “genial host” of a murder mystery radio show, who lives with his vicious niece, Althea (Audrey Totter), and her drunken husband, Oliver (Hurd Hatfield), in a mansion that actually belongs to Grandison’s ward, the naive Matilda (Joan Caulfield). When Matilda unexpectedly returns home after being presumed drowned in a shipwreck, she finds not only her familiar housemates but also Steven (Ted North), a mysterious young man who claims to be her husband. Murder, mystery, and hysteria ensue as the apparent suicide of Grandison’s secretary is revealed to be foul play, and the chief suspects are the residents of Matilda’s own home.

A strong Gothic quality hangs over the whole plot, with the imperiled heiress constantly under siege from one quarter or another. Her sanity is already questionable because of the shock of being lost at sea, and the events that unfold do little to improve her mental health. Like Paula Alquist in Gaslight (1944) or Lina McLaidlaw in Suspicion (1941), Matilda Frazier spends much of the story coming unglued, but Joan Caulfield lacks the presence of an Ingrid Bergman or a Joan Fontaine. We never see enough spine in this heroine to root for her or really fear for her safety. In fact, Caulfield’s Matilda is such a milquetoast that it’s easy to see why Althea hates her and much more difficult to understand her appeal to either Steven or Oliver. Steven also comes off as a bland, straight arrow sort, which undermines his guise as the forgotten husband. Joseph Cotten or Cary Grant might have played his role with a little more menace and uncertainty, but Ted North, credited as Michael North, can’t muster the necessary subtlety, and this role would prove to be his last screen appearance.

As problematic as the lovers might be, there are several solid players giving top-notch performances here. Rains, of course, puts his talent for slippery types to excellent use, and his hypnotizing voice makes him a perfect choice for a radio host. The great Audrey Totter oozes malice as nasty Althea, who steals Oliver from Matilda just for spite and quickly gets to work on Steven when she finds out that he belongs to Matilda, too. Hurd Hatfield, best remembered today as the title character in the 1945 adaptation of The Picture of Dorian Gray, here looks more like Dorian’s ruined portrait than his ageless original, with the decay of alcohol and self-loathing heavy on his brow. He makes us pity Oliver even as we deplore the weakness that leaves him vulnerable to Althea’s predatory charms. Constance Bennett has a small but effective part as Jane, who works for Grandison and is deeply interested in finding out who killed his secretary. Unlike Matilda and Althea, who could easily relocate to a Gothic castle, Jane is a thoroughly modern woman, cheerful, smart, and independent. Her no-nonsense attitude and strong moral character make her the only female character in the movie who is never in the slightest bit of danger.

The Unsuspected is available on DVD from Warner Archive.
Posted by Jennifer Garlen at 9:36 AM