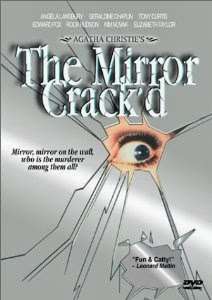 Director Guy Hamilton's 1980 film, The Mirror Crack'd, is not the greatest screen adaptation of an Agatha Christie mystery; there are plenty of more likely contenders for that title, including Witness for the Prosecution (1957), Murder on the Orient Express (1974), and Death on the Nile (1978). That said, it is a solid enough picture, perhaps a bit slow, but worth the time for Christie fans, particularly those who favor the village investigations of Miss Marple, here played by the very capable Angela Lansbury. The best audience for The Mirror Crack'd, however, is undoubtedly the experienced classic movie fan, who will appreciate this picture's dense web of classic Hollywood references, allusions, and inside jokes.

As Miss Marple, Lansbury enjoys a ringside seat at a murder investigation that begins when a group of Hollywood players settles in the neighborhood to make a lavish costume drama. At a party hosted by the American celebrities, one of the locals, Heather Babcock (Maureen Bennett), is fatally poisoned, and the evidence suggests that the intended victim was actually troubled star, Marina Rudd (Elizabeth Taylor). Plenty of suspects surround the actress, including her husband, Jason (Rock Hudson), her assistant, Ella (Geraldine Chaplin), and her hated rival, Lola (Kim Novak). Scotland Yard sends Miss Marple's nephew, Inspector Craddock (Edward Fox), to solve the case, and he naturally relies upon his observant aunt for assistance in discovering the identity of the murderer.

As a sleuth, Lansbury is best known as Jessica Fletcher, the heroine of the television series, Murder, She Wrote, but she makes a perfectly good Miss Marple, although in 1980 she was really too young for the role at only 55. There's less than a decade between Lansbury and her costar, Elizabeth Taylor, but Taylor looks decidedly middle-aged, while Lansbury's makeup and costume are designed to pass her off as a little old lady. The two actresses had first appeared together as sisters in National Velvet back in 1944, so The Mirror Crack'd represents a kind of reunion for its two stars. They are joined by an elite ensemble of classic Hollywood A-listers, with Rock Hudson, Tony Curtis, Charlie Chaplin's daughter, Geraldine Chaplin, and Kim Novak all playing substantial parts. Of the lot, Kim Novak has the most fun; she makes off with the entire film in her role as brassy, bitchy Lola Brewster, a wicked parody of the rotten Hollywood diva.

Christie's plot derives from a well-known Hollywood tragedy involving classic star Gene Tierney, which I won't summarize here because knowing what happened makes it all too easy to see how the mystery will end. Wait until after the movie to look it up if you aren't familiar with the real-life events. Other allusions in the film include the middle initial of Tony Curtis' producer character, a reference to David O. Selznick, as well as spoken lines from the characters that pay tribute to the other films of the stars playing the roles. Elizabeth Taylor, for example, gets to mock Kim Novak for looking like Lassie, with whom Taylor had starred in Lassie Come Home (1943), while Rock Hudson's frequent costar Doris Day is mentioned in another joke.

The Mirror Crack'd takes its title from Alfred, Lord Tennyson's famous poem, The Lady of Shalott; Christie named the original novel The Mirror Crack'd from Side to Side and used the poem as a recurring motif. Most of the film's stars are easy enough to find in other pictures, especially Elizabeth Taylor. Blink and you'll miss an uncredited appearance by a very young Pierce Brosnan. For more Miss Marple, see the films starring Margaret Rutherford from the 1960s, starting with Murder She Said (1961). You can see Angela Lansbury in her most important early roles in Gaslight (1944) and The Picture of Dorian Gray (1945). Director Guy Hamilton is best known for his work with the James Bond franchise; he directed Goldfinger (1964), Diamonds Are Forever (1971), Live and Let Die (1973), and The Man with the Golden Gun (1974).

An earlier version of this review originally appeared on Examiner.com. The author retains all rights to this content.
Posted by Jennifer Garlen at 1:41 PM