Classic Films in Focus: THE VALLEY OF GWANGI (1969) 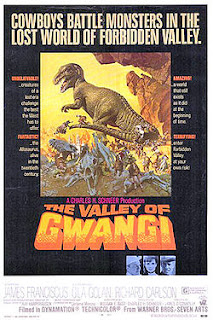 Like most of the films on which he worked, The Valley of Gwangi (1969) is best known today for the contributions of Ray Harryhausen, the special effects wizard whose pioneering work in stop-motion created monsters and magic long before the advent of CGI. This particular example of Harryhausen’s talent features plenty of fun creatures. made more interesting by their interactions with live actors and sets, but it’s certainly not the best movie in the Harryhausen canon. Haphazardly directed by Jim O’Connolly, The Valley of Gwangi lacks a human cast equal to its stop-motion stars, although the combination of B-Western cowboys and prehistoric dinosaurs does provide an entertaining spectacle once the mysterious valley appears.

Leading the human characters is James Franciscus as Tuck, an ambitious Western showman who wants to buy a wonder horse from his old flame, T.J. (Gila Golan). As it turns out, she has an even more wonderful horse than Tuck expected, a tiny eohippus taken from a forbidden valley by T.J.’s new boyfriend, Carlos (Gustavo Rojo). When gypsies steal the prehistoric steed to return it to its home, Tuck, T.J., Carlos, and Champ (Richard Carlson) team up with paleontologist Professor Bromley (Laurence Naismith) and his young guide, Lope (Curtis Arden), to enter the secret valley and recapture the valuable creature. There they find that the eohippus is only the least dangerous of the valley’s strange inhabitants.

The movie begins as a low-budget cowboy story about a group of Wild West showmen working south of the Mexican border, and except for the eohippus it stays firmly in that genre territory for quite a long time. There are plenty of odd characters poking about, including the ominous gypsies, who are led by an old blind woman with the usual penchant for prophesying doom. Naturally she has a sinister looking dwarf for a sidekick. The gypsies play as the villains in the piece, which doesn’t really make sense when they only want to return little Diablo to his valley home, but the movie seems content to assume that we’ll root for the cowboys and against the gypsies without any rational justification. Perhaps it doesn’t matter, since the audience is really going to root for the dinosaurs as soon as they make their appearance. The real advantage of merging the Western characters with the prehistoric effects is the chance to see the cowboys bullfight one dinosaur and lasso another, and these are some of the best moments of the whole picture.

The actors are an uneven bunch, although there are a few standouts among them. James Franciscus has a handsome face that recalls Charlton Heston’s in its smug, strong jaw and untrustworthy grin, and he does well enough as the leading man, but Gina Golan leaves a lot to be desired as his love interest. Richard Carlson is solid in a small role as the older showman, Champ, and Laurence Naismith is suitably academic and out of his element as Professor Bromley. Curtis Arden brings the cute kid element to the picture without being too precious, and he has some good exchanges with James Franciscus and a memorable encounter with a pterodactyl. As is often the case with monster movies, there are too many characters in the mix, largely to give the dinosaurs more opportunities to eat them, and we get little development for colorfully named cowboys like Rowdy and Bean.

Of the lot, Naismith probably had the best film career. See more of him in Village of the Damned (1960), Jason and the Argonauts (1963), and Camelot (1967), in which he played Merlyn. James Franciscus also stars in Beneath the Planet of the Apes (1970). For more of Ray Harryhausen’s iconic special effects work, see The Seventh Voyage of Sinbad (1958), Jason and the Argonauts (1963), and Clash of the Titans (1981).
Posted by Jennifer Garlen at 9:16 AM