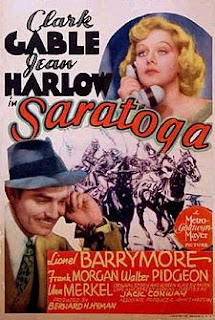 Although the story itself is a romantic comedy, Saratoga (1937) wears a shroud of sadness peculiar to those films unknowingly made by doomed stars. Jean Harlow, only 26 years old and already a huge Hollywood success, died just before shooting of the picture could be completed, and the studio finished the production and released the movie largely because of her fans’ fervent desire to see her final screen appearance. The loss of its leading lady undermines the movie’s ending, but until then Saratoga is a solid comic outing, featuring a classier role for Harlow and a cast of familiar players that includes Clark Gable, Lionel Barrymore, Walter Pidgeon, Una Merkel, and even Hattie McDaniel.

Harlow stars as Carol Clayton, a child of the horse track crowd who is moving up in the world thanks to her engagement to wealthy Hartley Madison (Walter Pidgeon). When her father dies and leaves the deed to the stud farm as a marker with his bookie, Duke (Clark Gable), Carol insists on buying Duke out before she gets married. Duke sees Carol’s fiancé as a rich target, but his better nature also inclines him to help the Clayton farm and Carol’s crusty old grandfather (Lionel Barrymore).

The early parts of the film are the best, with Harlow looking fabulously put together in a series of fashionable little hats. She and Gable have a sharp, snappy chemistry that marks all of their pictures together, but in Saratoga they clash constantly, and Harlow’s character has a prickly, contrary personality that is markedly different from the brassy, boisterous girls she often played. The problems in the third act caused by Harlow’s death are nobody’s fault, but one can’t help watching the film with a morbid eye for signs of Harlow’s illness or absence. Later scenes do seem to suggest her collapsing health, and the stand-in shots that were necessary to complete the film are glaringly obvious, with "Carol" seen only from the back and her face obscured by hats and other tricks.

Gable flashes his usual charming, roguish grins as the rival for Carol’s affections, and it’s clear from the start that his Duke is a lot more fun than Walter Pidgeon’s rich but rather wooden business tycoon. Gable also has some very good scenes with Lionel Barrymore and Gone with the Wind (1939) costar Hattie McDaniel, who makes the most of yet another domestic role. A crowd of other character actors also helps to keep the story rolling, with Una Merkel enjoying a fine part as Duke’s friend, Fritzi, and Frank Morgan mangling his lines amusingly as Fritzi’s jealous husband, Mr. Kiffmeyer. Look for Margaret Hamilton and her unmistakable nose in one scene with Frank Morgan that will entertain fans of their later film, The Wizard of Oz (1939). Keep an eye out, too, for George Zucco as the patronizing doctor who tries to calm a tightly wound Carol.

For earlier pictures with Harlow and Gable, try Red Dust (1932), China Seas (1935), and Wife Vs. Secretary (1936). Jack Conway, who directed Saratoga, also directed Harlow in Red-Headed Woman (1932), The Girl from Missouri (1934), and Libeled Lady (1936). See more of Walter Pidgeon in How Green Was My Valley (1941), Mrs. Miniver (1942), and Forbidden Planet (1956). Look for Una Merkel in several other Harlow films as well as 42nd Street (1933) and Destry Rides Again (1939). Prolific character actors Lionel Barrymore and Frank Morgan also turn up in additional Harlow pictures, but with more than 200 screen appearances for Barrymore and nearly 100 for Morgan, you’ll find both of them in plenty of classic films, often playing fatherly or grandfatherly roles to a variety of leading ladies, including Shirley Temple.
Posted by Jennifer Garlen at 9:54 AM