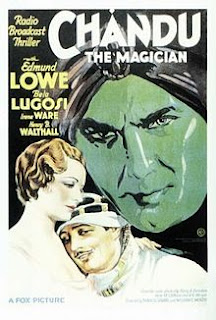 In the 1930s, Chandu the Magician was a popular radio program with a supernatural twist that lent itself to eerie sound effects, replete with the creaking doors, ringing bells, and ominous footsteps that made such programs so delightfully spine-tingling for their listeners. The movie version sought to take advantage of the original’s popularity with audiences, but it also had to translate the spooky chills into a visual medium, no small task considering a plot that involves astral bells, hypnotism, and hallucinations as well as exotic locations. Happily, Chandu the Magician (1932) manages to deliver quite a thrilling ride for viewers, thanks to inventive direction by William Cameron Menzies and Marcel Varnel. If Edmund Lowe is a bit stiff as the title hero, the special effects and sense of adventure go a long way to make up for it, but the real treat here is a deliciously evil performance by Bela Lugosi as a madman bent on controlling the world.

Lowe plays Frank Chandler, better known as Chandu the Magician, a white man who has acquired the mental powers of the Hindu yogi as well as their taste in headgear. Chandu leaves India for Egypt to defend the world and his sister’s family against the maniacal Roxor (Lugosi), who hopes to take over the planet by means of a giant death ray invented by Chandu’s brother-in-law, Robert Regent (Henry B. Walthall). Roxor will stop at nothing to gain knowledge of the ray, and Chandu finds himself, his family, and his lovely friend Princess Nadji (Irene Ware) in constant peril from Roxor’s countless lackeys and spies.

Chandu the Magician plays more or less as a horror story because of Bela Lugosi’s presence and the constant threats of sexual violence and torture set against the creepy backdrop of an Egyptian tomb. Fans of adventure stories, however, will notice the beats of that genre as part of the film’s makeup, as well. The set pieces, like the Hindu temple and the slave market, are meant to transport and excite the viewer with their exotic spectacles, and they succeed admirably. The special effects include duplicate versions of Chandu that appear and disappear, guns that change into snakes, ropes that hang in midair, and miniature versions of the boozy sidekick, Miggles (Herbert Mundin), that materialize to taunt him whenever he takes a drink. In between there are plenty of extreme closeup shots of Chandu’s hypnotic eyes and the frozen gazes of his victims.

The performances in the film are a mixed bag, but overall they work well enough to keep the picture interesting. Edmund Lowe, a leading man of the period who had previously played a magician in The Spider (1931), is not really unearthly enough to be credible as a mystic hypnotist, but he looks good in the disguises and has a hearty, masculine presence that works better with the adventure aspect than the supernatural one. Irene Ware puts her beautiful eyes to good use as the love interest, but Virginia Hammond and June Lang (credited as June Vlasek) don’t have a lot to do as the other women except to project the occasional terrified reaction shot. Herbert Mundin has several funny bits as the comic relief, and Henry B. Walthall holds his own as the captive inventor of the death ray, although it’s puzzling why a man with his strong moral convictions would create such a thing in the first place. Bela Lugosi, however, rules the cast with his terrific performance; this is really one of the best places to see him, freed from the distracting makeup and costumes of his more famous roles. In Chandu he looks slim, menacing, and full of sinister energy, and he gets plenty of dialogue to play with, too. He has so much screen presence that the studio got rid of Lowe and cast Lugosi as Chandu in the subsequent films.