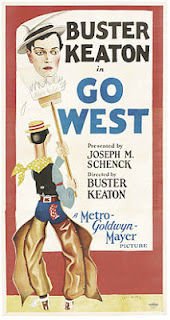 Although it’s set in its own modern day, Go West (1925) provides Buster Keaton with the opportunity to exploit the comic possibilities of Western staples like cattle drives, cowboy life, and the cultural conflict between urban and rural perspectives. These elements give the silent comedy its unique character in the Keaton oeuvre, with its own particular gags, even though the basic situation of Keaton’s awkward, earnest protagonist remains more or less the same. Although it lacks the jaw-dropping brilliance of Keaton’s best films, Go West still provides plenty of entertainment, and young viewers will especially appreciate the main character’s odd romance with a four-footed heroine.

Keaton plays the unfortunate Friendless, who follows Horace Greeley’s advice to “go West” after striking out in Indiana and New York. He falls into a job as a cowhand, where he finally finds a friend in a sweet-natured cow named Brown Eyes. When Brown Eyes gets sent to the stockyards by the rancher (Howard Truesdale), Friendless goes to great lengths to save her.

Like Keaton’s most famous film, The General (1926), Go West features the spectacle of our hapless hero atop a moving train, but the most memorable scenes in this picture involve the huge herd of cattle and the chaos that they inspire during their rampage through city streets. The unruly herd routs the locals by venturing into barber shops, department stores, and Turkish bath houses, with Friendless doggedly shooing them back out despite persecution as the cause of these intrusions. Keaton then stages a bizarre version of the running of the bulls, inducing the cattle to follow him by donning a red devil costume that works rather better than his character might like.

Less showy but more subtly subversive is Keaton’s substitution of a cow for his usual love interest. Brown Eyes plays the same role as the heroine in other Keaton films; like Annabelle Lee in The General, Brown Eyes has to be rescued from frequent peril, but her kindness is the transformative experience in the protagonist’s life, and to him she’s worthy of the utmost devotion. The actual girl in Go West, played by Kathleen Myers, never really competes with Brown Eyes for Friendless’ affection, as the picture’s final gag makes clear. Being a cow, however, Brown Eyes has some unique problems for her protector to solve, such as her inability to stand up to the other cattle due to her lack of horns. Friendless’ solution provides one of the silliest images of the film, which is certain to leave kids rolling in the aisles with laughter.

Keaton not only stars but also writes and directs on Go West; for more of his work in front of and behind the camera, see Sherlock Jr. (1924) and Seven Chances (1925). Don’t miss The General (1926), Steamboat Bill, Jr. (1928), and the earlier short, One Week (1920), as examples of Keaton’s most celebrated work. Any of the Keaton films will work well to introduce children to silent movies, but if the kids love Brown Eyes they’ll also fall for the monkey in The Cameraman (1928).
Posted by Jennifer Garlen at 10:52 AM