Classic Films in Focus: THE LEGEND OF THE 7 GOLDEN VAMPIRES (1974) 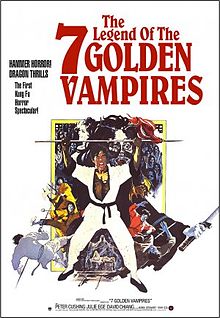 The basic idea of this later Hammer production from director Roy Ward Baker is patently ridiculous. The Legend of the 7 Golden Vampires (1974) might just as well have been called Kung Fu Dracula, representing as it does a mash-up of the successful Hammer formula and the Hong Kong martial arts genre as realized by the Shaw Brothers. It’s a crazy movie propelled by a crazy concept, but its nuttiness is a large part of its appeal, even if it’s a minor entry in the Hammer canon of vampire films.

Peter Cushing returns to the role of Professor Van Helsing, who has traveled to China in search of Asian vampires. With his son, Leyland (Robin Stewart), and an adventurous, wealthy widow (Julie Ege) in tow, Van Helsing sets off with a family of Chinese warriors to find a remote village plagued by deformed bloodsuckers. Dracula (John Forbes-Robertson) has already found out about this nest of vampires and has taken the form of a Chinese visitor (Shen Chan) in order to take over the undead army of the vampires and their victims. Inevitably, Van Helsing and the warriors must engage in a desperate battle with their demonic adversaries to put a stop to Dracula’s predation.

Christopher Lee is absent in the role of the bloodthirsty count, but it doesn’t really matter since Dracula spends most of the movie disguised as Kah. The plot might just as well have dispensed with Dracula entirely and focused on the unfamiliar and more promising territory of the Chinese vampires, who are markedly different in appearance and behavior from their European cousin. Van Helsing shows some interest in the cultural variations between Eastern and Western vampires, and we do see that the Buddha works just as well as the Christian cross when it comes to holy symbols. Unfortunately, we don’t learn nearly enough about the Chinese vampires. The undead attackers might be hopping vampires, but the film doesn’t bother to discuss them or their unique place in vampire mythology. It’s a shame, too, because the different vampires help to distinguish this installment from the stale retreads of the same old formula that Hammer had been using for far too long.

On the plus side, we have Cushing still playing Van Helsing with conviction and gravitas, looking very elegant in his tailored suits and adventure gear. Hammer gets to put quite a bit of female bosom on display and kill off a large cast of supporting characters in an orgy of gory excess, both elements that endear the studio to its many fans. The kung fu scenes are great fun, with David Chiang and Szu Shih both giving especially energetic performances. The movie also takes a decidedly liberal attitude toward interracial romance, and the location shooting in Hong Kong freshens up the whole atmosphere. These are sufficient attractions to keep Hammer devotees entertained throughout, especially if they’re also fond of the iconic kung fu pictures produced by the Shaw Brothers during their long and glorious career.