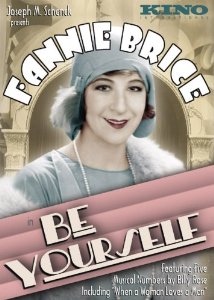 In 1969, Barbra Streisand won an Oscar for playing Fanny Brice in Funny Girl (1968), but that performance is probably the only encounter most modern viewers have with the Jewish comedienne, who became a star with the Ziegfeld Follies and was also known for her radio performances as Baby Snooks. Brice was not primarily a film actress. She made fewer than half a dozen notable screen appearances, which is too bad because she’s awfully fun to watch in Be Yourself! (1930), a minor comedy-drama that is worth seeing largely because of Brice’s comedic talent.

Brice (credited as Fannie rather than Fanny) plays Fannie Field, a nightclub performer who develops an affection for promising boxer Jerry (Robert Armstrong). Along with her lawyer brother, Harry (Harry Green), Fannie trains and manages Jerry until he becomes a big success, but her romance with him hits the skids when a predatory rival (Gertrude Astor) puts the moves on the gullible lug.

Be Yourself! is primarily a musical comedy, with Brice performing a number of songs that highlight her humorous bent. Her opera parody is funny stuff, but the highlight of the picture is Brice’s loony take on a swan ballet, in which the graceful conceit of a woman impersonating a dying bird gets turned on its head. Brice also excels at delivering one-liners and rolling her eyes to great effect, and she revels in stereotypically Jewish exchanges with Harry Green. Their constant kvetching, carried on with affection for each other and for Jewish identity, is another memorable aspect of the film.

Brice also has a chance to show her more serious side, especially in her moving and heartfelt performance of “When a Woman Loves a Man.” The song echoes the tone of Brice’s signature song, “My Man,” and Brice delivers both with great pathos. She also invests her character with dramatic feeling when Jerry jilts her for the gold digging Lil, although being a smart cookie Fannie soon cooks up a plan to win him back for good. Robert Armstrong plays Jerry as such a goofy palooka that we never know exactly what it is that Fannie sees in him, but having picked him she sticks faithfully, even when Lil lures him away.

You can see Be Yourself! on Netflix Instant or on Amazon Prime Instant Video.
Posted by Jennifer Garlen at 8:53 AM