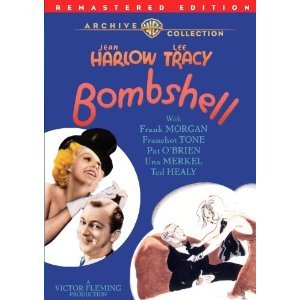 Two of Jean Harlow’s film titles became permanently associated with her image; one is Platinum Blonde (1931) and the other is Bombshell (1933), a very Hollywood look at the life and trials of a fictional leading lady. Under the uncredited direction of Victor Fleming, Bombshell presents a comedic take on the hazards of stardom, with Harlow playing a role for which she already had plenty of personal experience. Although it’s a funny picture with a cast of memorable performers, Bombshell also suggests the darker side of Tinseltown fame, since Harlow’s harried movie queen finds that there’s really no exit from the gilded cage in which she resides.

Harlow plays Hollywood star Lola Burns, who is adored by her fans but beset by leeches and opportunists on every side. Lola’s fame and the studio’s overeager publicity head, Space Hanlon (Lee Tracy), conspire to make her love life impossible, while her nutty relatives thwart her desire for peace at home. Sick of her crazy life, Lola runs away, but neither the studio nor Lola’s family will let go of their meal ticket that easily.

Although she is remembered today primarily as a sex symbol, Harlow shows a natural gift for comedy, and she easily keeps up with her hammy costars. She throws several impressive fits throughout the picture, tossing her platinum curls and stamping her little foot to great effect. Lee Tracy and Frank Morgan give her plenty to fume about with their troublesome characters; Harlow’s screen presence is evident in her ability to keep such inveterate scene-stealers from walking off with her film. Una Merkel, however, has little to do as Lola’s secretary, which is a shame since she knows how to work a comic character just as well as any of her costars. Franchot Tone adds class as the latest man to enter Lola’s life, the well-heeled Gifford Middleton, with C. Aubrey Smith and Mary Forbes as his parents.

Bombshell is ostensibly a comedy, and it does offer some very funny scenes and performances, but there’s also something terribly sad about Lola’s situation. She ends the movie no better than she started, even though we long to see her throw off the mooching father, the opportunistic secretary, and the two-faced publicity man once and for all. She never has a meaningful relationship with another person, even though her desire to adopt a baby shows how much she longs for it. Her career is ultimately nothing more than a glamorous trap from which she cannot escape, even though we know that an actress’ fame lasts only as long as her looks and her youth. Harlow herself would die at the tragically young age of 26, right at the height of her popularity, but her three marriages and two divorces indicate that she must have known something of Lola’s struggle to find real love.