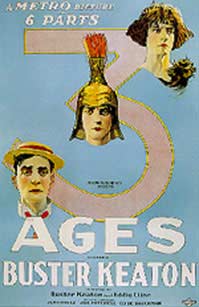 Although it’s not as celebrated today as Sherlock Jr. (1924) or The General (1926), Buster Keaton’s Three Ages (1923) is still funny stuff, even if it ventures into more outlandish settings than most of Keaton’s films. This would be the first of Keaton’s efforts at creating a feature film after a series of shorts; Keaton not only starred in Three Ages but also wrote, directed, and produced it, which means that his influence is felt in every frame of the picture but also that he had a lot riding on this production. Given its place in the formation of the Keaton canon, Three Ages is required viewing for hardcore fans of the silent comedian, but it’s also goofy and energetic enough for the youngest novice to enjoy, even if it lacks the polished brilliance of Keaton’s best films.

Keaton plays the underdog suitor in three interwoven tales of love and war across time: one in the Stone Age, one in the Roman Empire, and one in the modern day of the 1920s. In each incarnation Keaton vies with a larger and more successful rival (Wallace Beery) for the affections of a lovely girl (Margaret Leahy), but fate and his opponent throw one obstacle after another into Buster’s path.

The stories alternate so that we follow our romantic triangle through each segment of the common narrative in batches. Each story is set up, then the contests between the two rivals begin, and from there we proceed through the ups and downs of courtship toward the inevitable end. Of course, the conclusion of each story remains the same, with Buster finally winning his lady fair and retiring to enjoy the pleasures of domestic life, although the fruits of domesticity vary from age to age.

The Stone Age is the most absurd of the three settings, with Buster riding a stop-motion dinosaur and all of the characters engaging in gags that presage those seen on The Flintstones. In the Roman sequences the funniest bit is probably the chariot race, in which Buster drives a dogsled against his rival’s more traditional horses. His handling of a “flat” during that scene is particularly silly, but kids will love it. The lion’s den segment is also charmingly bizarre, especially when Buster searches the lion’s paw for a thorn to pull. There’s nothing remotely realistic about the lion, but he still displays wonderful personality, and his movements are fascinating to watch. The modern plot has fewer opportunities for such wild visual antics, but the situations remain just as comical, and without the crazy costumes we can focus on the more nuanced aspects of the three central characters.

For more of Keaton’s silent features, see Our Hospitality (1923), The Navigator (1924), and Steamboat Bill, Jr. (1928). He continued to appear in films long after the silent era ended, and you’ll also find him in In the Good Old Summertime (1949), Sunset Blvd. (1950), and A Funny Thing Happened on the Way to the Forum (1966). Wallace Beery also made the jump to talkies, and today he is best remembered for character roles in classics like Grand Hotel (1932), Dinner at Eight (1933), and China Seas (1935). In 1932 he tied with Fredric March for the Best Actor Oscar for his performance in The Champ (1931). Margaret Leahy, the winner of a leading lady contest in England, made no other pictures, so Three Ages is the only chance you’ll have to assess her potential as a silent film star.
Posted by Jennifer Garlen at 7:56 PM