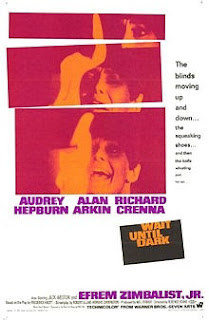 Directed by Terence Young, Wait Until Dark (1967) represents a departure for star Audrey Hepburn from the softer, more romantic roles that she usually played. It turned out to be a good move, too, since Hepburn earned her fifth and final Oscar nomination for Best Actress because of her performance as a blind woman terrorized by a trio of devious criminals. Nearly fifty years later, Wait Until Dark remains a very effective thriller largely because Hepburn does such a good job convincing us that she really is desperately afraid and completely unable to see. Her costars, especially Alan Arkin, also make this film a nailbiting affair, and the last ten minutes provide a tense payoff that Warner Bros. publicized with great enthusiasm when the movie was first released.

Hepburn plays Susy Hendrix, who recently lost her sight in a car accident and is learning how to navigate the world as a blind person. Her photographer husband, Sam (Efrem Zimbalist Jr.), pushes her to be independent, even though she often feels afraid and longs for more sympathy from him. When Sam unwittingly takes possession of a doll filled with drugs, he makes Susy a target for three ruthless criminals determined to get the doll back. Susy has only herself and a troubled neighbor child, Gloria (Julie Herrod), to help her find the doll and figure out the truth about Mike (Richard Crenna), Carlino (Jack Weston), and the mysterious Mr. Roat (Alan Arkin).

Hepburn’s character has to evolve very quickly in order to survive her encounter with the criminals, and the film shows us some provocative contrasts between the faltering, uncertain Susy of the beginning and the frantic but determined Susy of the climax. She starts the story terrified by the very idea of fire, but she ends it waving a lit match in an apartment covered with gasoline, and she reveals a fierce side of herself that she clearly did not know existed. Hepburn remains fragile, if not hysterical, throughout, but we understand that Susy is a person who really has to search for the courage to fight back against her attackers. She is also a very observant woman, despite her blindness; it’s not so much that her other senses are sharper, but that she has to rely on them more for information about what’s going on around her. Her ability to read those clues gives her a critical advantage over the con men who try to trick her into giving them the doll; they think she’s an easy mark because of her sex and her disability, but she turns out to be a lot more resourceful than they - or we - expect.

Alan Arkin is especially sadistic as Roat, the leader of the criminal trio. His performance makes it clear very early on that Roat has no qualms about murder, and we know better than to think that he will be satisfied to retrieve the doll and leave Susy unharmed, no matter what he says to his two accomplices about nobody getting hurt. Roat relishes Susy’s confusion and panic, which is why he allows the ruse to continue as long as it does. As Mike and Carlino, Richard Crenna and Jack Weston look like Boy Scouts compared to Arkin’s amoral killer; the audience sees them as charlatans but not necessarily as sinister antagonists, and Mike in particular seems ambivalent about the role he plays in deceiving Susy. If there’s a serious fault with the picture, it’s that Mike turns out to be much more attractive and sympathetic than Susy’s husband, Sam, and the chemistry between Crenna and Hepburn is so palpable that we long to see it realized even though we know Susy is already married.

See Audrey Hepburn in her most iconic roles in Roman Holiday (1953), Breakfast at Tiffany’s (1961), and My Fair Lady (1964) for contrast with her performance in Wait Until Dark. Director Terence Young is also remembered for his work on the James Bond films, Dr. No (1962), From Russia with Love (1963), and Thunderball (1965). Alan Arkin, who is still working in films, won an Oscar for Best Supporting Actor for Little Miss Sunshine (2006); he recently earned his fourth career Oscar nomination for his performance in Argo (2012). You can find Richard Crenna as Colonel Trautman in all three of the Rambo movies. Frederick Knott, who wrote the original stage play version of Wait Until Dark, also wrote Dial M for Murder, which was adapted as a film by Alfred Hitchcock in 1954.
Posted by Jennifer Garlen at 10:41 AM