Classic Films in Focus: THE RETURN OF THE VAMPIRE (1944) 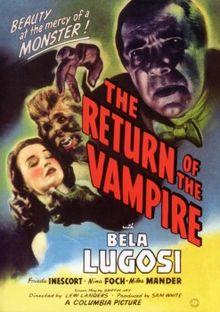 This Columbia production directed by Lew Landers puts Bela Lugosi back into a vampire’s cape and fangs, but The Return of the Vampire (1944) is not exactly a success when it comes to following up on the iconic Dracula (1931). Despite a number of inspired elements, the film fails with its two most visible characters, the vampire and his werewolf lackey, and in a horror film that’s a problem that simply can’t be ignored. Still, Lugosi fans will probably want to see The Return of the Vampire just for more of the actor’s burning eyes and sinister accent, and at just 69 minutes long it’s easy enough to sit through if you can put up with one of classic horror’s worst werewolf attempts.

Lugosi rises from the grave as Armand Tesla, a vampire who is first defeated in 1918 by Dr. Walter Saunders (Gilbert Emery) and Lady Jane Ainsley (Frieda Inescort). Decades later, during the bombing of World War II, Tesla is revived when German shells reveal his coffin. He reclaims his werewolf servant, Andreas (Matt Willis), and sets out for revenge against Lady Jane by threatening her son, John (Roland Varno), and his fiancee, Nicki (Nina Foch).

There are a lot of things to admire in this film, beginning with the progressive casting of a female scientist as the vampire’s opponent. Frieda Inescort is completely credible as the courageous and intelligent Lady Jane, and it’s interesting to note that the story never sexualizes her struggle with Tesla at all. Is she too old or too practical for such ploys? At any rate, the vampiric seduction focuses entirely on the innocent young Nicki, whom Tesla first attacks when she is just a little girl, and lovely Nina Foch has some good scenes wandering about under Tesla’s seductive mind control. The movie also uses the World War II backdrop well, with the vampire hunt complicated by constant bombing and the monsters finding plenty of places to hide in the damaged ruins of the city. The cemetery scenes offer plenty of fog and spooky atmosphere, and the idea of Tesla assuming the identity of a scientist fleeing Nazi Germany is also a timely touch.

The monsters themselves, however, disappoint, especially the lackluster werewolf. We never understand how Tesla transforms Andreas into a werewolf in the first place; who knew that lycanthropy was a result of hypnosis? The makeup for the wolf man lacks originality, and Andreas never manages to be scary, partly because he talks and acts like a regular person in full werewolf form. He’s really just a hairy Renfield, without Dwight Frye’s manic madness. Lugosi doesn’t have much to do as Tesla; he mostly stands in doorways and whispers hypnotically at people from offscreen. In the scenes where he pretends to be Dr. Bruckner, there’s really nothing sinister about him at all, and even rising from his coffin he seems too solid and ordinary to be a terrifying ruler of the undead. Given Lugosi’s performances in other films, the fault here lies with the material he is given, not with the actor himself, but this is certainly not the place to start watching Lugosi’s work.