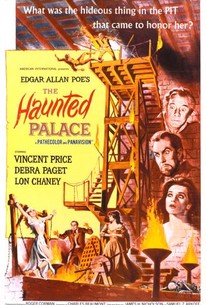 Although the story really comes from H.P. Lovecraft's The Case of Charles Dexter Ward, Roger Corman's The Haunted Palace (1963) bills itself as one of the director's Edgar Allan Poe films and features all of the familiar trappings of those Gothic horror tales. Vincent Price is, as usual, in the lead, here playing a dual role as an evil warlock and his identical descendant, with Debra Paget making her final screen appearance as the descendant's long-suffering wife. The constant fog, gloomy period setting, and well-established genre tropes ensure that fans of Corman's other films will find plenty to appreciate here, but the chief attractions beyond Price and Paget are a gaggle of creepy mutant villagers and supporting performances from Lon Chaney, Jr. and Elisha Cook, Jr. The Haunted Palace is one of five films Corman directed in 1963, and it's not the first Corman picture anyone should see, but it's a fun outing for its iconic stars and worth the time if you enjoy the other Corman and Price collaborations.

Price appears first as the powerful necromancer Joseph Curwen, who conspires with his mistress, Hester (Cathie Merchant), to bewitch young women and bring them to his castle for unspeakable occult practices. The local villagers form a vigilante mob and burn Curwen at the stake, but not before he curses them and their descendants. Over a century later, Curwen's identical great-great-grandson, Charles Dexter Ward, inherits the castle and arrives in the town of Arkham with his lovely wife, Ann (Debra Paget). The village men (played by the same actors who appeared as their ancestors) make the Wards unwelcome, but Curwen's spirit soon possesses Charles and resumes his diabolical schemes of necromancy and revenge.

The dual roles of Joseph Curwen and Charles Dexter Ward give Vincent Price plenty to do, especially when he gets to play the two personalities warring for dominance over Ward's mind. Greenish makeup on the warlocks' faces helps us know when Curwen has control, but Price embodies the shift convincingly without the visual cue. Ward is a perfectly normal gentleman who loves his wife and doesn't believe in supernatural curses, while Curwen is a cunning sadist who is more than willing to murder anyone who crosses him. Of course, Curwen is destined to get the upper hand and wreak havoc, which ensures that Price can cut loose with his villain and make the most of a thoroughly terrible character. His sudden cruelty to his devoted wife leads her to suspect that evil is at work in the castle, but over time Curwen gets better at impersonating Ward so that he can continue his schemes in the secret chambers underground.

Debra Paget gives a solid performance as the worried wife, although she's the only developed female character in the whole story and spends most of her time looking frightened. Curwen is supposed to be obsessed with his dead mistress, Hester, but we don't see enough of her to understand his determination to resurrect her even though it's a distraction from the mission he and the other necromancers are supposed to be accomplishing. Lon Chaney Jr. has several scenes with Price but is subdued throughout; by 1963 he's long past his heyday as a horror star and not really credible as a fiendish immortal necromancer. The villagers, both past and present, are played by Leo Gordon, Elisha Cook, Jr., Frank Maxwell, and John Dierkes, and of the lot Maxwell has the most scenes because his doctor character tries to befriend and assist the Wards, although Cook is probably the most fun to watch because he plays fear-induced panic so brilliantly. Almost all of the named characters are rather dramatically upstaged by the deformed mutant villagers, descendants of the women Corwen bewitched and the ancient godlike thing he keeps locked in his underground lair. Cook's character, Peter, hints at the way the unholy mating has tainted the bloodlines of Arkham by revealing his own webbed hand, while Gordon's Edgar Weeden keeps his violent mutant son imprisoned in his home. Sadly, we don't know what, if anything, becomes of the mutants at the end of the story, since the Curwen/Ward conflict dominates the third act.

Different Corman fans will have their own favorites, but I recommend House of Usher (1960), The Masque of the Red Death (1964), and The Tomb of Ligeia (1964) if you want to see some of the best of the Poe adaptations with Vincent Price. You'll find both Price and Debra Paget in The Ten Commandments (1956), while Elisha Cook Jr. and Price both appear to great effect in William Castle's classic shocker, House on Haunted Hill (1959). See Lon Chaney Jr. in better times in his most memorable role as the ill-fated Larry Talbot in The Wolf Man (1941) and Frankenstein Meets the Wolf Man (1943), or check out his dramatic roles in Of Mice and Men (1939) or High Noon (1952).

Posted by Jennifer Garlen at 8:49 PM