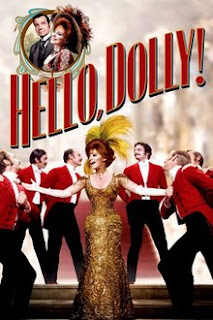 Big, colorful musicals are my favorite antidote to troubled times. As much as I enjoy the black-and-white productions of the 30s, there's just something about a bright, splashy palette that makes everything else in a musical seem more cheerful. That's certainly the case with Hello, Dolly! (1969), which looks like a candy store with its rainbow of period costumes and sprightly dance sequences. Directed by Gene Kelly and headlined by Barbra Streisand, this adaptation of the Broadway show has its flaws and failures, to be sure, but it benefits from Streisand's magnetic screen presence and truly amusing performances by Michael Crawford and Danny Lockin as two store clerks set loose on the big city.

Streisand stars as widowed matchmaker Dolly Levi, whose entrepreneurial zeal extends to all kinds of business but is primarily invested in securing her own marriage to grumpy shop owner Horace Vandergelder (Walter Matthau), who in turn has his sights set on an attractive hat maker named Irene Molloy (Marianne McAndrew). Dolly thwarts Horace's plans by setting up Irene and her assistant, Minnie (E.J. Peaker), with Horace's two clerks, Cornelius (Michael Crawford) and Barnaby (Danny Lockin). At the same time, Dolly also thwarts Horace's desire to keep his niece, Ermengarde (Joyce Ames), away from her ardent beau, Ambrose (Tommy Tune), even though Dolly has been hired by Horace to make sure the lovebirds are separated. When everyone finally meets up at Dolly's old stomping grounds in New York City, the various romances play out against a backdrop of dancing waiters and musical chaos.

Despite its seven Oscar nominations and three wins, and its popularity at the box office, Hello, Dolly! still hammered nails into the musical genre's coffin because it was too expensive to be profitable, and it does have a certain late-stage quality about it. It's overlong, especially in the second half, thanks to extended dance sequences that don't advance the story, and most of the songs are nice enough but not really memorable (the title song excepted, of course). Ermengarde and Ambrose disappear completely for such a long time that it's a bit of a shock when they finally turn up again for the conclusion, and honestly it's never clear why on earth Dolly wants to tie herself to such a sourpuss as Horace, even if he does have enough money to provide a comfortable life. That might have something to do with the obvious lack of chemistry between Streisand and Matthau, who just don't look or act like they belong in the same room, much less the same marriage. Streisand is, undoubtedly, too young for the role, which had been played on Broadway by Carol Channing, and the age difference between Streisand and Matthau only increases the feeling that Dolly is settling for an unsuitable spouse for the sake of financial security.

Those problems, however, don't keep Hello, Dolly! from being genuinely charming and enjoyable, and Streisand holds its all together from start to finish. Dolly is in complete control of the narrative throughout the story, and Streisand is simply captivating in her performance, resplendent in red hair and a stunning array of grandiose hats and gowns to match. She's such a glorious presence that we understand the excitement when she returns to the Harmonia Gardens for the final act, where waiters leap into joyful chorus lines at the mention of her name. Streisand gets her best support from Crawford and Lockin as the clerks who take Dolly's advice and end up having the time of their lives; they have a delightful rapport with each other and their respective love interests, which goes a long way to make up for the absent Ambrose and Ermengarde. The mood of the whole picture is sunny and energetic, with a youthful enthusiasm that makes every obstacle seem surmountable, especially when it comes to love. It has that same charming if utterly fictional turn-of-the-century atmosphere that pervades at Main Street USA in Disneyland, where parasols and a can-do attitude are equally necessary equipment.

Given that comparison, it's fitting that you can currently stream Hello, Dolly! on Disney+, which is also appropriate because of the film's significance to the title character in the 2008 Pixar hit, Wall-E. Hello, Dolly! was Barbra Streisand's second feature film appearance, the first being Funny Girl (1968), which earned her an Oscar for Best Actress. She would go on to star in The Way We Were (1973), A Star is Born (1976), and Yentl (1983). I enjoy Walter Matthau more in other films, especially The Odd Couple (1968). Michael Crawford would become best known for his leading role in Andrew Lloyd Webber's stage production of The Phantom of the Opera, but Danny Lockin's career was tragically short and ended with his murder in 1977, when he was just 34 years old. If you enjoy the musical exuberance of Hello, Dolly!, try The Music Man (1962) or Paint Your Wagon (1969) for more of the decade's offerings in the genre.

Posted by Jennifer Garlen at 7:08 PM