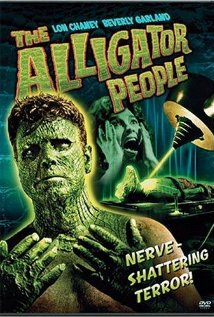 Like The Fly (1958), The Alligator People (1959) merges science fiction and horror with a premise about dangerous experimentation gone horribly wrong, although in the second movie's case the combination of animal and human traits is intentional rather than tragically coincidental. Thus we get Richard Crane, as the increasingly reptilian victim of medical innovation, wandering the Louisiana swamps with one seriously bad case of gator face, while Beverly Garland chases after him as a dedicated wife who just won't take "no" for an answer. Most horror fans will come to The Alligator People for Lon Chaney, Jr., who plays a drunken villain, or for another example of the drive-in sci-fi chiller that flowered in the 1950s, but additional attractions can be found in the direction of Roy Del Ruth and performances from experienced players like Bruce Bennett, George Macready, and Frieda Inescort, each of whom helps to nudge the picture beyond mere B-movie spectacle.

Garland is the story's protagonist, a newly married nurse named Joyce Webster whose husband, Paul (Richard Crane), vanishes from a train on their honeymoon. Joyce tracks Paul to his family's plantation in the swamps, where she meets his mother, Mrs. Hawthorne (Frieda Inescort), who gives Joyce an icy welcome and tries to force her to leave. Determined to uncover the truth, Joyce stays until her mother-in-law and a local medical researcher, Dr. Sinclair (George Macready), reveal that Paul is suffering the side effects of a radical treatment for injuries he sustained in a plane crash during the war. Joyce joins their efforts to reverse Paul's transformation, but chaos erupts when a loutish plantation worker, Manon (Lon Chaney, Jr.), transfers his violent hatred for alligators to the alligator man.

The Alligator People is by no means a great film, and it often makes choices that are typical of its genre, but it also offers pleasant surprises. The pseudo-science of the central plot is wrapped in a strange psychological setup that presents Joyce, now known as Jane, as a victim of trauma induced amnesia as a result of her experience. Bruce Bennett appears in the frame scenes as one of two sexist doctors who can't stop mentioning how attractive the nurse is even as they use hypnosis to dredge up her horrible past. On the plus side, the frame tale serves a practical purpose in that it lets the audience know right away that this story won't end well for the alligator man or his bride, much as the opening of The Fly sets that story on its unbending course toward tragedy. The sexism also gets a much appreciated rebuke in the stalwart devotion of Joyce, who refuses to give up her search or abandon her husband once she sees his monstrous transformation. She even goes after him at the end, screaming not so much at his freakish appearance as his awful demise. Sure, his alligator head looks utterly fake, and we can even see the seams in his bodysuit, but Beverly Garland's performance as Joyce helps us focus on the drama of the situation rather than its special effects budget.

The success of the movie depends mostly on Garland, who plays Joyce as an active, intelligent woman caught up in overwhelming horror, but several supporting performances are worth noting. Lon Chaney. Jr. makes his presence felt as the belligerent Manon, a far nastier role than the actor's best known characters in other horror films. With his hook hand and his lecherous eye, Manon is a true monster; he provides a telling contrast to Paul, who loses the appearance of humanity but retains its inner qualities, even to the bitter end. Frieda Inescort also turns in a good performance as Paul's distraught mother; her accent wanders a bit, but she navigates the emotional territory of her character with greater assurance, letting her stern rejection of Joyce melt into shared misery over a loved one's terrible fate. Richard Crane gets less screen time as Paul, since he mostly skulks around the bayou in hiding, but his opening scenes set the stage for his later anguish. Hold on to the subtle cues on his handsome face as he talks about his accident with Joyce; that subtlety is lost later, but its emotional impact endures. Bruce Bennett and George Macready are both somewhat underused in their roles, but they give their doctors far more animation than such characters usually have in these pictures.

Posted by Jennifer Garlen at 8:17 PM