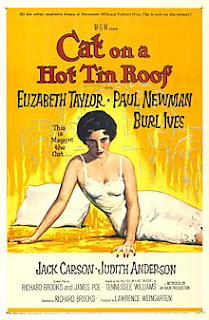 Along with A Streetcar Named Desire (1951), Cat on a Hot Tin Roof (1958) is one of the most popular Hollywood treatments of a Tennessee Williams play, although the author himself was not a fan of the changes that had to be made to get his story onto film. In spite of Williams' understandable frustration with Hays Code homophobia, Cat on a Hot Tin Roof garnered six Oscar nominations and helped to boost the popularity of its stars, Paul Newman and Elizabeth Taylor, who both picked up Academy Award nominations for their performances. The movie still packs a punch nearly sixty years later, thanks to Newman and Taylor's tortured chemistry as well as truly memorable turns by Burl Ives, Judith Anderson, and Jack Carson. Like most Tennessee Williams stories, this one deals with a deeply dysfunctional Southern family, which provides plenty of explosive material without the missing theme of Brick's suppressed homosexuality, and the stars in each major role give their all in bringing their complicated, conflicted, and flawed characters to life.

Newman plays alcoholic football has-been Brick Pollitt, who returns to his family's plantation home with his wife, Maggie (Elizabeth Taylor), for the birthday of the ailing Pollitt patriarch, Big Daddy (Burl Ives). Brick breaks his leg in a drunken attempt to relive high school glories, but his real problems are the recent death of his best friend, Skipper, and his subsequent estrangement from his wife, whom he punishes for her role in Skipper's death by withholding sex. Brick's brother, Gooper (Jack Carson), and his aggressively fertile wife, Mae (Madeleine Sherwood), spend their time eavesdropping on Brick and Maggie and plotting ways to get a bigger piece of Big Daddy's considerable estate, while Big Momma (Judith Anderson) clings to the hope that Big Daddy's illness is not as serious as everyone else suspects.

Newman and Taylor set the screen on fire with their depiction of a fraught relationship on the very edge of annihilation; they are both impossibly sexy, prowling around in states of undress and simultaneously tempted to tear each other's clothes off or tear each other apart. The film makes a point of Brick's heterosexuality by having Newman secretly bury his face in Maggie's nightgown even as he rejects her from behind a closed bathroom door. He wants her badly but feels driven to hurt both her and himself because of his guilt over Skipper. Taylor's Maggie, the titular cat, never stops fighting to win Brick back, but she also has to contend with Goober and Mae and their brood of obnoxious children; her genuine sympathy for Big Daddy and Big Momma contrasts with her loathing for Goober's family, which can sometimes make her seem shrill. Brick proves the more dynamic of the pair, since he has to come to grips with his alcoholism, his marriage, and his relationship with his father during a condensed period of time. The symbolic shift occurs when he breaks his crutch while trying to flee the plantation in a pouring rain; his guilt, his booze, and his anger are all crutches that he'll have to give up if he wants to survive.

The supporting cast members have less attractive but equally complex roles to play. Burl Ives, best remembered today as the jovial voice of the Snowman in Rudolph the Red-Nosed Reindeer (1964), gets a chance to demonstrate his belligerent side with Big Daddy, a bad-tempered old tyrant who bullies and harasses his family but doesn't know how to love them. He and Judith Anderson both walk a very fine line in playing characters who are often difficult and even exasperating but ultimately have to be sympathetic. The film shows us the warts first and then asks us to understand these wounded, yearning older people; in one especially powerful scene, a heartbroken Big Momma holds Big Daddy's birthday cake and laments, "In all these years you never believed I loved you. And I did." Anderson invests her character with equal parts foolishness and anguished affection, and in lines like that her performance goes straight to the heart. Less likable are Jack Carson and Madeleine Sherwood as Gooper and Mae, both grasping and disingenuous schemers who treat reproduction like an arms race. Carson gets to redeem Gooper just a bit near the very end, but Sherwood's Mae is an unrepentant bitch, and her performance is gloriously vicious throughout, with Mae getting a lot of the movie's best lines. You'll itch to slap the insufferable "Sister Woman" cockeyed, especially after that crack about the "Punch Bowl," and her comeuppance is one of the finale's sweetest payoffs.

Richard Brooks, who directed Cat on a Hot Tin Roof, returned to Williams material and Paul Newman with Sweet Bird of Youth (1962); Brooks also directed Elmer Gantry (1960), The Professionals (1966), and In Cold Blood (1967). For more film adaptations of Tennessee Williams, try Baby Doll (1956), Suddenly, Last Summer (1959), and The Roman Spring of Mrs. Stone (1961). Elizabeth Taylor's third husband, Michael Todd, died in a plane crash during the production of Cat on a Hot Tin Roof, making this film a particularly difficult effort for her; see her in happier times in Lassie Come Home (1943) or in later roles in Who's Afraid of Virginia Woolf? (1966) and The Taming of the Shrew (1967). Don't miss Paul Newman in The Hustler (1961), Cool Hand Luke (1967), and Butch Cassidy and the Sundance Kid (1969). For the sake of contrast, see Judith Anderson's terrifying performance as Mrs. Danvers in Rebecca (1940) and Jack Carson's comedy shenanigans in Romance on the High Seas (1948) and Dangerous When Wet (1953).

Posted by Jennifer Garlen at 4:55 PM