Classic Films in Focus: AND THEN THERE WERE NONE (1945)

Long a staple of high school and community drama programs, Agatha Christie's stage version of And Then There Were None is a little less murderous than the original novel but still packed with good parts. The 1945 film adaptation, directed by Rene Clair, stocks those parts with truly memorable character actors, including Walter Huston, Judith Anderson, Barry Fitzgerald, Mischa Auer, and Richard Haydn, each in fine form as one of the condemned guests of the mysterious Mr. Owen. Invested with a mischievous sense of humor as well as a constantly growing heap of corpses, And Then There Were None moves quickly and handles its large cast well, giving each at least one good scene before the murderer removes that player from the game. The result is great fun, even if the viewer already knows the identity of the killer before the opening credits roll. 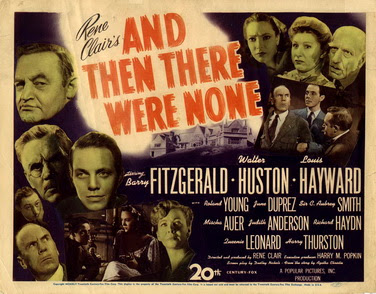 Eight guests and two house servants gather to spend the weekend on a remote island estate at the command of the secretive Mr. U.N. Owen, whom none of them seem to know. A recording soon informs them that their host is privy to their terrible secrets; each is accused of causing the death of another person and getting away with it. The guests are then rapidly dispatched, each in a way that corresponds to the nursery song, "Ten Little Indians," and every death is accompanied by the destruction of another Indian statue on the dining room table. Realizing that one of them must be the killer, the shrinking group of survivors tries to identity the murderer, but alliances within the group both help and hinder the process. 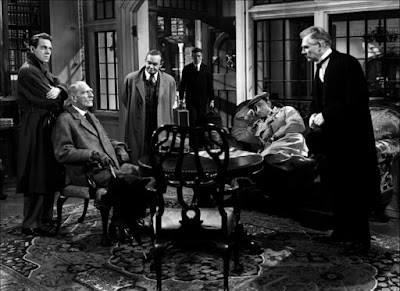 It's difficult to say very much about the mystery itself without giving away the ending, although most viewers who come to the movie will already know it from previous encounters with the frequently performed play. The conclusion does differ significantly from that of Christie's 1939 novel (the title also differs, and for good reason), although most of the characters carry over in somewhat altered forms. Christie's premise has been copied, parodied, and reworked countless times, but it's still a very good setup for a mystery, and the criminal conduct of most of the guests makes us fairly nonchalant about their deaths. The absence of a proper detective - Roland Young's dense Mr. Bloor definitely doesn't count - leaves the nervous survivors to figure things out for themselves, while the audience makes it own guesses as each new death removes another suspect from the list. No two deaths are exactly the same, although, this being Agatha Christie, there is a decided preference for poison overall, which helps to keep the women and older male characters in play as potential killers.

For movie buffs, the real pleasure of this particular production is the large and impressive cast, including Walter Huston as the alcoholic Dr. Armstrong and Barry Fitzgerald as Judge Quincannon. Both of those actors are celebrated for their strong character performances, and here they simply revel in their delightfully suspicious roles, especially when they join forces in the third act. Judith Anderson, best remembered as Mrs. Danvers in Rebecca (1940), plays the sanctimonious Miss Brent with heartless hauteur, while C. Aubrey Smith is rather tragic as the elderly general. Richard Haydn and Mischa Auer both play their characters for laughs, with Haydn as the long-suffering butler, Rogers, and Auer as the "professional house guest" prince. Sadly, Auer's character is the first to go, but he makes the most of his brief time on screen. Louis Hayward and June Duprez play the attractive young couple who fall for each other even as the murderer closes in, and they have fine chemistry together, especially when each suspects that the other might be the killer. Rounding out the crowd are Roland Young as the ineffectual Mr. Bloor and Queenie Leonard as the housekeeper, Mrs. Rogers, whose early death the other characters lament mainly because it deprives them of their cook.


If the black comedy of And Then There Were None appeals, follow up with Murder by Death (1976) or Clue (1985), both of which take their cues from Christie's plot. For more film adaptations of Agatha Christie, try Witness for the Prosecution (1957), Murder on the Orient Express (1974), and The Mirror Crack'd (1980). Rene Clair also directed The Ghost Goes West (1935), The Flame of New Orleans (1941), and I Married a Witch (1942). See Barry Fitzgerald in Going My Way (1944), where his performance earned nominations for both Best Actor and Best Supporting Actor (he won the latter). Walter Huston won an Oscar for The Treasure of the Sierra Madre (1948), but don't miss his wild performance in Kongo (1932). Look for both C. Aubrey Smith and June Duprez in The Four Feathers (1939), and catch Louis Hayward in The Man in the Iron Mask (1939). Oddly enough, both Richard Haydn and Queenie Leonard, who play a married couple in this film, provided voices for the 1951 Disney classic, Alice in Wonderland.
Posted by Jennifer Garlen at 5:00 PM