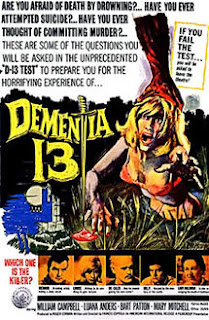 Whatever the outcome, there's something fascinating about the combination of Roger Corman and Francis Ford Coppola, the producer and director, respectively, of the low-budget shocker, Dementia 13 (1963). While the movie leaves a lot to be desired, thanks in part to disagreements between the two and tinkering by Corman, there's enough going on to make it watchable, and even mildly entertaining, for the brief seventy five minutes that it runs. This is absolutely a B movie of the drive-in variety, the kind of horror slasher that amorous teenagers of the era only half-watched in between their make out sessions, with periodic flashes of violence and gore to make the audience look up. Still, if you're interested in the influence of Alfred Hitchcock's Psycho (1960), Dementia 13 provides a good example of the way in which the earlier picture helped to establish the visual vocabulary of the slasher genre.

Luana Anders stars as Louise Haloran, a greedy bride who covers up her husband's death from a fatal heart attack in order to cash in on his part of his mother's will. Luana then goes to work on Lady Haloran (Eithne Dunne), who still grieves the drowning death of her youngest child, Kathleen. Louise promises Lady Haloran that Kathleen's spirit speaks to her and will soon show the obsessed mother a sign, but Louise finds out that she isn't the only person on the estate with sinister secrets. There's a killer on the loose, one who also has an obsession with the long dead Kathleen. Is it one of the brothers, Richard (William Campbell) and Billy (Bart Patton), or the unnerving Dr. Caleb (Patrick Magee) who wields the deadly ax?

Stylistically and thematically, Dementia 13 resembles the work of William Castle more than it does either Corman or Coppola; its original theatrical release even included a gimmicky introduction that supposedly justified the otherwise nonsensical title. It borrows liberally from Psycho but never achieves the narrative tension of the Hitchcock film, even though its black-and-white cinematography does occasionally provide some very effective images. The first murder makes particular use of Hitchcock's visual style, imitating the iconic shower scene in its editing, its characters, and its use of blood and water. Later, an onscreen decapitation delivers a gory shock but doesn't really advance the story, since the character being killed has nothing to do with the central plot. More indicative of things to come are the attack on Lady Haloran in Kathleen's abandoned playhouse and the gruesome reveal of a semi-nude corpse hanging in a shed; moments like these become more or less obligatory in the slasher films that follow.

The characters assembled for this fatal gathering lack really insightful development but do offer hints and suggestions of interesting psychological issues. Louise is very much an anti-heroine, heartless and manipulative, and Luana Anders plays her sly self-interest well. Billy suffers from nightmares and some kind of post-traumatic disorder, having witnessed his sister's death when he was just a child, while the taciturn Richard avoids any discussion of the family tragedy, even with his fiancee, Kane (Mary Mitchel). Both actors in the surviving brother roles do their best with the material at hand, although Peter Read, who plays John, has to make the most of his opening heart attack scene. A more talented actress might have made something really Gothic out of Lady Haloran, but Eithne Dunne at least looks the part; her scene in the playhouse is definitely her best moment in the picture. She and Patrick Magee are both actually Irish, although neither of them sound like it, and there's something very unsettling about Magee's performance as the doctor. Some of the bizarre behavior is simply misdirection, meant to keep the audience guessing about the killer's identity until the end of the movie, but even necking teenagers in the backseats of cars probably figured it out long before the final reveal.

Roger Corman's other films from 1963 include The Terror, The Raven, and The Haunted Palace, all of which he directed and produced. Francis Ford Coppola went on to fame and Oscar glory as the director of The Godfather (1972), The Conversation (1974), and Apocalypse Now (1979), but he revisited horror with Dracula in 1992. Luana Anders, William Campbell, and Patrick Magee can all be found in Corman's The Young Racers (1963), on which Coppola also worked as the second unit director. You can see more of Anders in Corman's 1961 Poe film, The Pit and the Pendulum. William Campbell had the longest and most varied career of the movie's cast, but his most memorable role might be as the Klingon Koloth in the Star Trek episode, "The Trouble with Tribbles." At the time that they made Dementia 13, actors Bart Patton and Mary Mitchel were married in real life; they divorced in 1980.

Posted by Jennifer Garlen at 11:00 AM