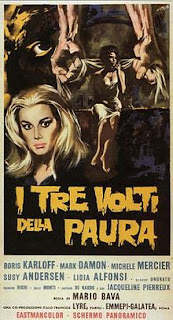 Mario Bava's 1963 Italian-French horror anthology, Black Sabbath, is both lurid and literary, much like Roger Corman's Poe films from the same era, but without the cheeky black humor that pervades the Corman canon. Even more so than in Corman's loosest adaptations, the literary pedigrees of Bava's three chilling tales are hopelessly muddled, but their questionable origins don't diminish their effectiveness. Each story in this trio has something different to offer: the first is a subversive thriller, the second a Gothic vampire tale, and the third a ghastly story of otherworldly revenge. On hand as host and star of the second segment is genre icon Boris Karloff, delightful even when dubbed and looking truly terrifying as the family patriarch in "The Wurdulak." While not, perhaps, as perfect an example of Bava's style as Black Sunday (1960), this anthology picture makes a solid introduction to the Italian auteur, and it usually finds a place on lists of Bava's most significant works.

The collection opens with "The Telephone," in which a beautiful young woman (Michele Mercier) fears the threats of a murderous caller and enlists the aid of her former lesbian lover (Lydia Alfonsi) to keep the attacker away. In the second story, "The Wurdulak," a young gentleman (Mark Damon) meets a family horrified by the possibility that their patriarch (Boris Karloff) has returned home as a vampire intent on killing those he most loved in life. The final story, "The Drop of Water," depicts a nurse (Jacqueline Pierreux) who steals a ring from a dead woman, only to face a ghost's relentless vengeance.

Of the three stories, "The Wurdulak" is the grandest and the most like Bava's most celebrated feature length tales. It's awash in Gothic atmosphere but driven by a nihilistic attitude that leaves no potential victim off limits. The story is adapted from a novella by Aleksey Tolstoy, a cousin to Leo, but still a successful writer in his own right. Karloff looks terrifying as Gorca, especially in the later scenes, and Susy Andersen is lovely as his daughter, Sdenka. The third segment, "The Drop of Water," will delight fans of a sinister face, since its chief attraction is the ghoulish countenance of the dead woman from whom the nurse takes a valuable ring. It's definitely the stuff of nightmares, and the darkly ironic ending provides a touch of grim humor, too. The least compelling story leads the set; "The Telephone" is more straightforward thriller material, with lesbian sexuality shaking up the usual misogyny of such tales but not really alleviating our sense of Rosy, the attractive victim, as an object of voyeurism and violent desire. Very little can be made of the film's writing credits for either "The Drop of Water" or "The Telephone," except that Bava clearly wants to invest his anthology with a classy literary sensibility.

The horror anthology picture is a peculiar but enduring subgenre, and Bava's entry makes a useful companion to Corman's Tales of Terror (1962) and Sidney Salkow's Twice-Told Tales (1963), both of which feature Vincent Price as their primary star. Bava limits his signature star's screen time to bookend sequences and the middle story, but Karloff provides the same kind of cachet to the proceedings, just as Peter Cushing does in From Beyond the Grave (1974). Later examples of the anthology include The House That Dripped Blood (1971), Tales from the Crypt (1972), The Vault of Horror (1973), Creepshow (1982), and Cat's Eye (1985), which show the format's ongoing appeal as a way to give horror audiences a variety of shocks in a single theatrical experience. For Bava, the anthology approach allows for a more condensed exploration of themes he engaged over the course of his career; in addition to true horror pictures, he also made thrillers like The Girl Who Knew Too Much (1963) and Rabid Dogs (1974), so his inclusion of "The Telephone" in Black Sabbath makes sense, even if it seems very different from the other two segments.

Be sure to watch the original release version of Black Sabbath, known as I tre volti della paura in Italian; the English dubbed AIP version changes the order of the stories and makes drastic alterations to "The Telephone." For more of Mario Bava, see The Whip and the Body (1963), Kill, Baby, Kill (1966), and Baron Blood (1972). Boris Karloff's other films from 1963 include The Raven, The Terror, and The Comedy of Terrors, proving that the iconic star was still much in demand over forty years after his screen debut. You'll find Mark Damon in Corman's House of Usher (1960) and in later continental shockers like The Devil's Wedding Night (1973) and Hannah, Queen of the Vampires (1973). Michele Mercier is best remembered as the star of Angelique (1964) and its sequels, but she returns to the horror genre for Web of the Spider (1971).
Posted by Jennifer Garlen at 12:02 PM